Since her rise to fame on TikTok, fans have wanted to know about Charli D’Amelio‘s boyfriend, who she’s dating now and what happened with her on-again, off-again boyfriend, Lil Huddy.

Charli started her TikTok in May 2019 after creating dance videos on her friends’ accounts. “I got started with TikTok because all of my friends were using the app and posting on their accounts. I didn’t have an account, so I was just dancing on their phones and I’d be like, ‘Oh, can you send me that? That’s so cool,'” she told Variety in 2020. “Eventually I decided to make my own account because I was having so much fun making all of these dance videos with my friends. I got the app, I started dancing, my videos started getting a little bit more popular on the app and a lot has happened since then. Now I’m here getting to do stuff like this.”

In November 2020, Charli, who reached 1 million followers less than two years prior, became the first TikTok creator to reach 100 million followers. Though she’s received brand deals and sponsorships as a result of her TikTok fame, Charlie told Entertainment Tonight in 2020 about the side effects of the attention. “When you start noticing yourself getting into that place where you’re like ‘Wow, these people are more invested in seeing us fail than they want to actually see us be happy together,” she said at the time. “It can be really detrimental, and you just have to stay true to yourself. It happens with friendships, relationships… everything.”

Charli also told Variety in 2020 about how her friendships have changed due to her social media status. “At first, it was really uncomfortable because when TikTok started, it was kind of like, ‘Oh, you’re on TikTok? That’s weird,'” she said. “So I wouldn’t tell people. Someone would come up to me and maybe ask for a picture and then someone else would be like, ‘Oh, how do they know you? Like, what are you from?’ I was like, ‘Oh, I do social media. I don’t know,’ and I would get super uncomfortable.”

She continued, Then my friends would be like, ‘Hey, I saw you on my ‘For You’ page. That’s so weird.’ It was a lot of that until I felt comfortable to be like, ‘Yeah, I’m on TikTok.’ I just started posting videos, not really caring what anyone else thought, because I was having fun making them. But since then, I have switched to an online one-on-one schooling program that’s great for me because I tend to have a pretty busy schedule. So I’m able to work my hours of schooling around that and I can do them a little bit earlier and get them done. I’ve also been able to make a lot more friends out in California.”

So who is Charli D’Amelio’s boyfriend? Read on ahead for what we know about her past relationship and whether she’s dating anyone now. 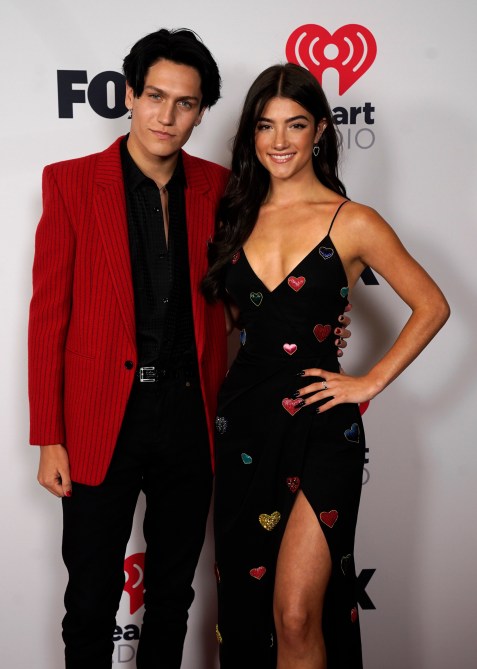 Charli D’Amelio and fellow TikTok creator Chase Hudson (a.k.a. Lil Huddy) met in November 2019 as members of the Hype House, which Chase created with TikToker, Thomas Petrou. The two confirmed their relationship in February 2020 with Valentine’s Day posts to each other on Instagram. In an interview with Entertainment Tonight at the time, Lil Huddy revealed that he and Charli had been dating since December 2019.

In March 2020, members of the Sway House, another TikTok group, claimed that Lil Huddy had cheated on Charli. Sway House member, Josh Richard, claimed that his girlfriend at the time, TikToker Nessa Barret, had received explicit DMs and photos from Lil Huddy. Josh and TikToker also released a song at the time titled “Still Softish,” where they continued to accuse Lil Huddy of talking to other women. The music video for the song starts with Josh receiving texts from Nessa about Lil Huddy texting her. The lyrics also include phrases like “Tryna fuck my girl. Like I couldn’t see” and “this is to tell all of your fans you still be fucking with girls. Telling people Charli’s your world,” which were directed at Lil Huddy.

A month later, in April 2020, Charli and Lil Huddy announced that they had broken up in statements on their Instagram Stories. “It hurts me to say this, but we’ve decided that this is what’s best for both of us. We are still close friends and I would not change that for anything!” Charli wrote at the time.. “I’m sorry I waited so long to tell you all. I wanted to take the time to process it for myself. Breakups are tough for anyone, so I’d really rather not talk about it anymore.” Lil Huddy, for his part, wrote, “Charli is such an amazing person and I am so beyond grateful and blessed to have spent the time I spent with her. We will always be friends and she will always hold a special place in my hear for the rest of my life. We are sorry it’s taken so long to come forward, but this was something we wanted to process privately first.”

In May 2020, a month after their breakup, rumors swirled that Charli and Huddy were back together he posted a birthday message to her with a white heart emoji, and she responded with the same emoji. In July 2020, Charli accused Chase of cheating on her with Nessa. The drama started when Josh, Bryce and more TikTokers unfollowed Huddy on Instagram. Charli then tweeted, “I hope she was worth it.” Huddy seemingly responded to Charli’s tweet, hinting that the drama was because he kissed Nessa.  “All of this drama going on because I kissed Nessa when we were both single,” he wrote.

Charli, for her part, responded to Huddy’s tweet, denying that he was single at the time he and Nessa kissed. “Then you shouldn’t have come to my house after without telling me,” she wrote. When Huddy tried to accuse other TikTokers of cheating on their significant others, Charli accused Huddy of trying to “play the victim.” She wrote, “Stop deflecting your actions onto others because you can’t take responsibility Chase. Want me to talk about how you treated me throughout our relationship or do you just want to continue to play the victim?” Charli and Huddy later apologized for their social media spat and confirmed that they had spoken privately to each other and were on good terms. “Everything’s handled, but it still should have never happened,” Huddy wrote on his Instagram Story at the time. “I’ll be learning a lot from this as a person, growing from it, and setting a better example for you guys.”

However, the drama wasn’t the end of Huddy and Charli’s relationship. In April 2021, Huddy released the music video for his song, “America’s Sweetheart,” which starred Charli as his love interest. Though the two told TMZ at the time that they were “just friends,” rumors swirled that they were back together. In May 2021, Charli and Huddy walked the red carpet together at the iHeart Music Radio Awards, which hinted at their relationship, though neither has confirmed whether they’re back together.

The D’Amelio Show is available to stream on Hulu.