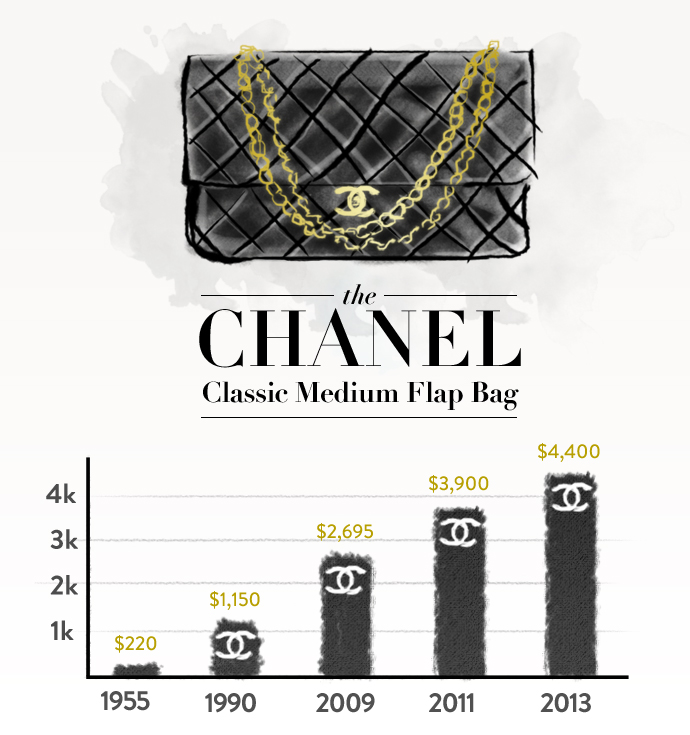 It’s a given that buying a Chanel bag is going to set you back—by a lot. But you might be surprised by just how much the price of the Chanel Classic Medium Flap Bag has increased over the last 58 years, since it first debuted in 1955. Is the bag that has been carried by everyone from Victoria Beckham to Ashley Olsen worth the investment still? We investigate.
The History
Coco Chanel debuted her classic bag in 1955, wanting something utilitarian and practical to carry around (in the same vein that she transformed the way that women wore suits). The bag was sold in the U.S. for $220 when it launched, a hefty sum in those, days certainly. The bag’s detailing and personal connections to Chanel herself is partly what makes it so special. The lining’s burgundy color represents the color of the uniforms at the convent where Chanel grew up. There is a zippered compartment at the inside of the front flap, where the designer was rumored to have stored her love letters. The bag, of course, went on to become a huge hit, and it was issued in numerous materials and colors of the years. Chanel released an exact copy of the original 2.55 in February 2005 in commemoration of the 50th anniversary of the creation of the original.
Why Chanel Has Raised Its Prices
Lots of reasons exist as to why Chanel has raised its prices so dramatically (particularly in the last few years). Inflation is certainly one, though if that were the only factor at work, the bag that launched in 1955 for $220 would now cost $1,910. The increasing cost of labor is another major factor. Chanel makes it bags in France and Italy (Chanel actually owns one of the factories it produces its handbags in in a small town outside of Paris). Very few luxury brands are still producing their goods entirely in Europe, and the cost of labor in Europe has skyrocketed as most manufacturers have moved to Asia. The last reason (and the one we know you have been dreading hearing) is just because Chanel can raise its prices. It’s a practice called prestige pricing, and the thought behind the marketing strategy is giving a product a high price is crucial in conveying the idea that that product has value and status.
Good Investment?
Now that the Chanel Classic Medium Flap Bag costs $4,400 (before tax), if you take into consideration that you would wear it every day for a year, it will set you back $12.07 per day for that year. Not terrible, considering you probably spend $5 on a latte every morning, but still, you are going to want to make sure that you want to wear this bag a lot. Hermès Birkin bags now cost upwards of $10,000 for a simple leather version, so in that sense you are certainly getting a steal. We also won’t blame you for hitting yourself for not buying the Chanel bag a mere two years ago. In that short amount of time the bag has increased in price by 12.8 percent. By the same token, if Chanel continues at this pace, by 2015 the bag will cost $5,630—so not only will $4,400 seem like a steal, but you might even be able to turn a profit should you sell it.