Since his death, fans have wanted to know more about Chadwick Boseman‘s wife, Taylor Simone Ledward, and what their relationship was like before he passed.

Boseman, who has starred in movies like Black Panther, Ma Rainey’s Black Bottom and 21 Bridges, died on August 28, 2020, in his home in Los Angeles after a four-year battle with colon cancer. His family confirmed his death in a post on his Instagram at the time. “It is with immeasurable grief that we confirm the passing of Chadwick Boseman.⁣ ⁣ Chadwick was diagnosed with stage III colon cancer in 2016, and battled with it these last 4 years as it progressed to stage IV,” the statement read. “A true fighter, Chadwick persevered through it all, and brought you many of the films you have come to love so much. From Marshall to Da 5 Bloods, August Wilson’s Ma Rainey’s Black Bottom and several more, all were filmed during and between countless surgeries and chemotherapy.”

The statement continued,⁣ “It was the honor of his career to bring King T’Challa to life in Black Panther. ⁣ He died in his home, with his wife and family by his side. The family thanks you for your love and prayers, and asks that you continue to respect their privacy during this difficult time.”

Boseman is survived by his wife, Taylor Simone Ledward, whom he married less than a year before his death. According to CNBC, Boseman didn’t leave a will. Ledward has since filed probate documents to be an administrator with limited authority over part of Boseman’s estate, which is estimated at $939,000. As CNBC notes, this number isn’t all of Boseman’s estate as his assets are subject to probate, the legal process of administering someone’s estate after death through court intervention. CNBC reports that other accounts, such as life insurance, qualified retirement accounts like 401(k) plans and individual retirement accounts, may also be passed down to a beneficiary. According to the site, as of 2020, up to $11.58 million per person can be passed on tax-free to heirs.

In January 2021, Ledward gave an emotional speech in honor of her late husband as she accepted the Actor Tribute award for him at the Gotham Awards. “As an artist, an actor, and a person, Chad made a practice of telling the truth,” she said. “He is the most honest person I’ve ever met…because he didn’t just stop at speaking the truth. He actively searched for it in himself, in those around him and in the moment.”

She continued, “The truth can be a very easy thing for the self to avoid, but if one does not live in truth, then it’s impossible to live in line with the divine purpose for your life..and so it became how he lived his life, day in and out. Imperfect but determined. He was blessed to live many lives in his concentrated life. He harnessed the power of letting go and letting God’s love shine through. Thank you for giving Chad these gifts. It’s an honor to receive this award on behalf of my husband. Chad, thank you. I love you. I am so proud of you. Keep shining your light on us.”

Ahead is what else to know about Chadwick Boseman’s wife, Taylor Simone Ledward, and how else she’s honored him after his death. 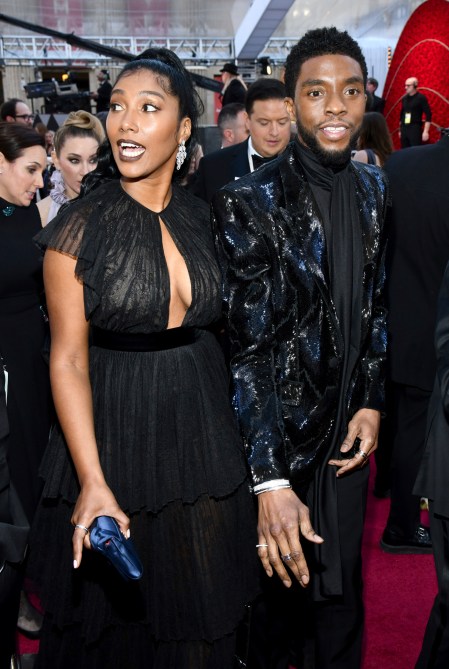 Taylor Simone Ledward, left, and Chadwick Boseman arrive at the Oscars on Sunday, Feb. 24, 2019, at the Dolby Theatre in Los Angeles. (Photo by Charles Sykes/Invision/AP)

It’s unclear when Boseman and Ledward started dating, but the two had been together since at least 2015 when they were photographed at the Los Angeles International Airport. According to MTO News, Boseman and Ledward got engaged in October 2019. “Chadwick and Simone got engaged. It was a long time coming and everyone is really happy,” a source told the site. Around that time, Ledward was also photographed with a diamond engagement ring on her wedding finger as she and Boseman attended a Lakers/Clippers game at the Staples Center in Los Angeles. According to Page Six, the two married in secret months before Boseman’s death in August 2020.

In an interview with In Touch in 2018, Boseman’s grandmother confirmed that she was supportive of their relationship. “They respect each other. She’s very happy, and he is, too,” she said at the time. Ledward’s sister also commented on their relationship in a past Instagram comment when fans shipped him with his Black Panther co-star Lupita Nyong’o. “His real-life queen is gorgeous, and together they embody true love,” Ledward’s sister responded to a fan.

What is Taylor Simone Ledward’s job?

Ledward graduated from the California State Polytechnic University, Pomona, in 2014, where she earned a bachelor’s degree in music industry studies. Ledward, who graduated from a college a year before she and Boseman went public with their relationship, is also a singer and has been seen singing with her university’s jazz band.