Often dubbed the “Oscars of Fashion” the yearly CFDA Awards is the American fashion industry’s moment to highlight who is having an impact, whether they are designing the clothes that are starting trends, or are the trendsetters themselves.

While Mary Kate and Ashley Olsen of The Row, Joseph Altuzarra, and Dao-Yi Chow and Maxwell Osborne of Public School scooped up awards for best accessories, womenswear, and menswear respectively, it was Rihanna and Tom Ford who stole the show.

Rihanna scooped up the Fashion Icon Award, presented by Anna Wintour while wearing a completely sheer custom mesh gown by Adam Selman covered in 216,000 Swarovski crystals (sure to go down as the most memorable part of the evening). She told the crowd: “Anna Wintour makes the rules and I break them…As long as I can remember, fashion has been my defense mechanism. As a child I remember thinking, she can beat me but she cannot beat my outfit.” Another takeaway from the star: “I can compensate for all of my weaknesses with fashion.” 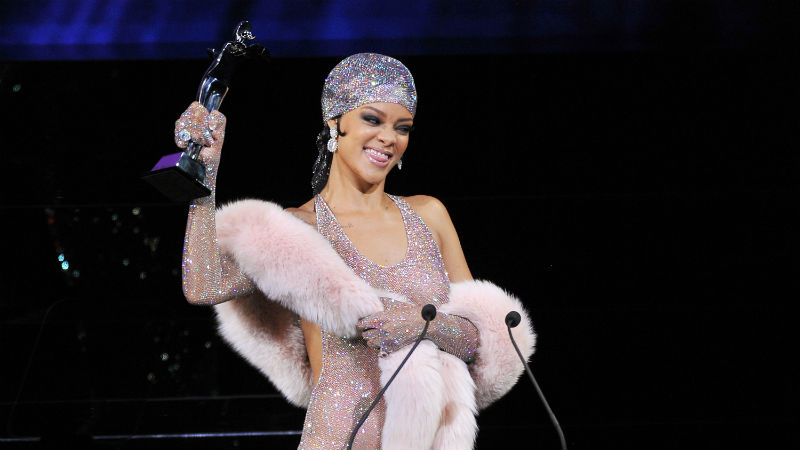 Meanwhile Ford walked away with the Geoffrey Beene Lifetime Achievement Award, presented to him by his husband Richard Buckley who joked in his introduction that he should be the one getting the award for having put up with Ford for the past 27 years. “It’s been a wonderful 25 years and I could have never achieved it without all the people in this room,” Ford said in his acceptance speech.

See the complete list of the 2014 CFDA Fashion Award winner below. Winners are in bold.

THE FOUNDER’S AWARD IN HONOR OF ELEANOR LAMBERT: Bethann Hardison

BOARD OF DIRECTORS’ TRIBUTE: Ruth Finley

THE MEDIA AWARD IN HONOR OF EUGENIA SHEPPARD: Paul Cavaco