After spending time in Paris during Couture Fashion Week, one is bound to be inspired by a few eccentric looks. Someone might even want to try them out on the streets—burst from their fashion bubbles and wear something a little different. With that spirit in mind (I guess), Celine Dion wore a ridiculous neon yellow dress on Tuesday that made me do a serious double-take.

Like, actually, I think I screamed “Celine! What are you wearing?!” to my computer when I saw this bold ensemble. Let’s start with the dress, because it actually might keep me up at night if I don’t address this. The singer was seen in Paris wearing a neon yellow dress that made her look like a walking couture crayon. The fabric, which looks to me like polyester, gave the dress a floor-length raincoat vibe. IDK what the hell is going on, but did Celine Dion just join the cast of Sesame Street? Because that’s truly the only explanation I can think of that makes any sense. 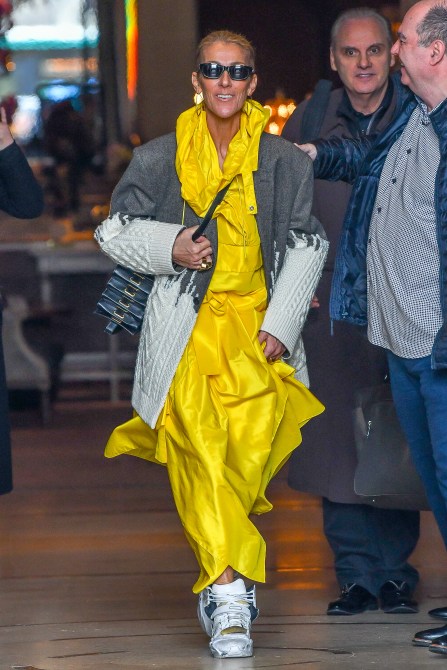 On top of the neon yellow dress, Dion wore some sort of half-blazer, half-sweater gray jacket. I take back what I’ve said about the Kim Kardashian and Blac Chyna half-jacket trend: This is even more confusing. Is it a blazer? Is it a cardigan? We will never know, and I’m kind of OK with that. I will say, though, whatever kind of jacket she’s wearing, it actually looks comfy AF.

But let’s not forego discussion of the accessories Celine Dion blessed us with. First of all, the singer is wearing sunglasses at night, which is major BDE. (Don’t @ me for using BDE months after it peaked.) The navy purse she’s carrying looks like it’s either an accordion bag or just has five different compartments (which, TBH, would actually be super helpful in keeping your shit organized). But Dion’s shoes are truly the cherry on top of this ensemble. She really went all-out with the ugly dad sneaker trend, because those might be the ugliest dad sneakers I’ve ever seen. Don’t get me wrong: Celine Dion is a goddess who can pull off anything, but I think those shoes have wings and I’m so fucking done.

This wild ensemble really made me want to scream “WHY?!” into the abyss, but I really do love and support Celine Dion with every fiber of my being. Hopefully she nails her new role as Big Bird. (OK, I’m done. I promise.)