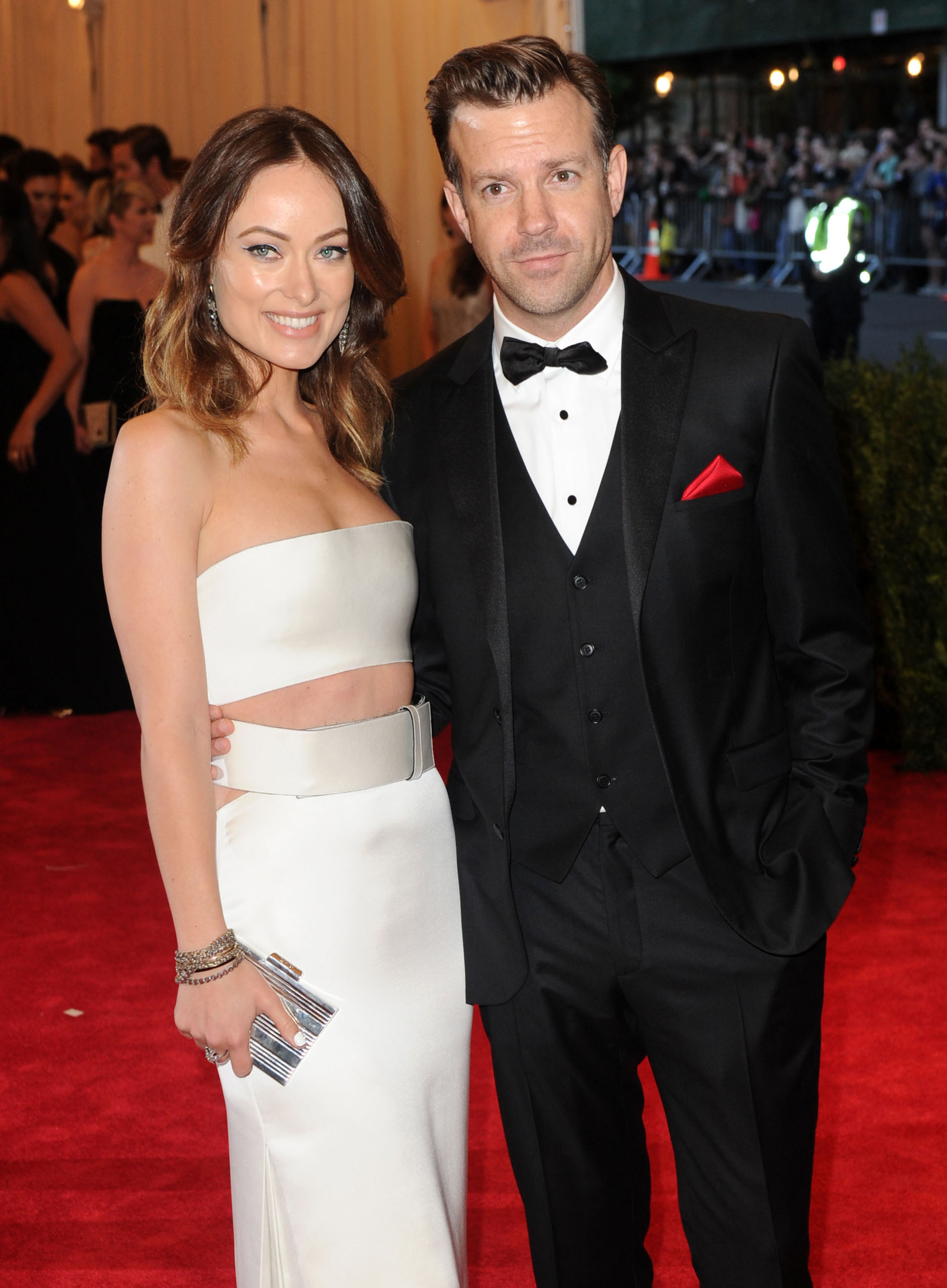 It’s no big secret that celebrities sure love to talk about themselves, although it seems that these days, more and more famous folks also want to be seen as super-approachable and normal (ahem, Jennifer Lawrence). But oftentimes in an A-lister’s quest to relate to their fans, they offer up a little too much information. Namely, when it comes to their sex lives.

It’s to be expected that some outspoken celebs like Heidi Klum and Khloé Kardashian aren’t afraid to let the world in on their bedroom antics, but we can’t help but be surprised when stars like Olivia Wilde and her beau Jason Sudeikis both open up about how much they love having sex with each other, or when demure-seeming supermodel Miranda Kerr admits she’s masturbated on a plane.

With that in mind, read on for 13 stars who’ve shared (way) too much about their sex lives.

Jason Sudeikis
About his fiancee Olivia Wilde, comic actor Jason Sudeikis told the August issue of Elle that sex was the reason behind his recent weight loss. “The truth is, I’m not getting up an hour earlier and walking on a treadmill. I have the greatest workout partner in the world,” he said. “And you don’t need a gym membership for that kind of workout.” Um, ew.

Olivia Wilde
Obviously, it’s no surprise that Wilde also raves about her boudoir bonding with her man, as well. Last year, at These Girls, a monologue performance hosted by Glamour mag, Wilde spoke about her divorce from Italian prince Tao Ruspoli. “I felt like my vagina died. Turned off. Lights out. You can lie to your relatives at Christmas dinner and tell them everything on the homefront is just peachy, but you cannot lie to your vagina,” she said. Then she proceeded to say that Sudeikis revived her dead female organs. “We have sex like Kenyan marathon runners,” she noted. We get it. You guys have a lot of sex, let’s move on.

Miranda Kerr
The gorgeous model—who split with hubby Orlando Bloom last year—happens to be GQ magazine’s March 2014 cover girl, and inside the magazine said that the lack of sex is making her lose her muscle tone. “One thing I’ve noticed is now that I’m having less sex my body isn’t as toned,” she says. “The more sex I have, the more defined my arms and stomach get.” Kerr also told the mag that improving her sex skills is of the utmost importance. “I always ask for a critique on my performance. I always want to better myself in every way,” she said. The model also offered up this TMI gem: “I’ve had an orgasm in the air before. Alone. And together.”

Jada Pinkett Smith
The relationship between Jada Pinkett Smith and superstar hubby Will Smith has always been questioned, and many have wondered what actually goes on behind closed doors. Luckily, Pinkett Smith was more than happy to gush about their wild love life in a Redbook interview in 2011. In order to keep things spicy, she suggests: “Be sneaky … your girlfriend’s house at a party. The bathroom. A bedroom. Think of places outside that are comfortable to have sex. Does he have access to his office? Have a fantasy date. Be his secretary!” We’re pretty sure that if we were the Smith’s friends and we walked in on them getting busy at our party, we’d be slightly annoyed.

John Mayer
Before he took a much-needed break from the spotlight, John Mayer ran his mouth at every opportunity he could. In a 2010 interview with Playboy, he spoke of his ex-girlfriend Jessica Simpson—describing her as “crack cocaine.” “Sexually it was crazy. That’s all I’ll say,” he said. “It was like napalm, sexual napalm. Did you ever say, ‘I want to quit my life and just f—–g snort you? If you charged me $10,000 to f–k you, I would start selling all my s–t just to keep f—–g you.'” Okay then.

Michael Douglas
When Michael Douglas admitted he may have contracted throat cancer from too much oral sex, the world was pretty shocked. But this kind of sexual overshare isn’t something new for the legendary actor. Back in a 2010 interview with AARP magazine, he spoke about his sex life with much-younger wife Catherine Zeta-Jones. “But God bless her that she likes older guys. And some wonderful enhancements have happened in the last few years—Viagra, Cialis—that can make us all feel younger,” he said.

Angelina Jolie
We get it, Angelina Jolie: Brad Pitt is the perfect guy! In an interview with The Telegraph, Jolie revealed, “I am very lucky with Brad. He’s a real gentleman, but he is also a real man’s man. He’s got the wonderful balance of being an extraordinary, great, loving father, a very, very intelligent man and physically he’s a real man, in all things that it means.” We get what you mean, girl.

Jane Fonda
She may be over 70 years old, but doesn’t mean Jane Fonda is afraid of getting a little freaky. In an interview with Hello! last year, she revealed that her and music producer partner Richard Perry are more than experimental when it comes to making love. “At 74, I have never had such a fulfilling sex life. When I was young I had so many inhibitions—I didn’t know what I desired,” she said. To that we say: Good for her!

Kim Kardashian
Before she was a superstar, Kim Kardashian was merely just another Hollywood rich girl with a sex tape with an R&B singer. Interviewed by a magazine before her reality show took off, she answered as to where the craziest place she’d ever had sex was. “An airplane. On a private plane though. I don’t think I’d do it on a commercial flight,” she admitted. Oh, how thoughtful!

Nick Carter
Backstreet Boy Nick Carter and heiress and purse designer Paris Hilton were hot and heavy for a bit, lest you forget. But apparently, their sex life wasn’t everything he had hoped for. “She was a drunken prude who as far as I can see did not really like sex,” he stated. “She relied on drugs and drink to give her confidence in the bedroom and was more often than not too wasted to even perform.” Ouch!

Heidi Klum
Considering her penchant for naked selfies, it’s no surprise that Heidi Klum goes all out in the bedroom. Speaking to Marie Claire she said, “Some people are more experimental in bed and others are more boring. If you are wild and crazy, bring it on so the other person is well aware that you have little devil horns that come out every once in a while. It’s good to make an effort to dress up sometimes, to do things outside of the norm.”

Lamar Odom
Basketball star Lamar Odom and Khloé Kardashian are definitely very open about their sex life on every single one of of E!’s “Keeping Up With the Kardashians” iterations, but this comment went a little bit too far. When chatting with George Lopez on his late night show back in 2010, he revealed how he likes his wife to stay groomed. “You can tell I’m into the bald,” he stated. “You got to keep it clean down there. It’s disgusting if you let it go crazy.” We wonder how the feminist community felt about that one.

Jessica Simpson
Since John Mayer clearly noted that she’s into sex, it’s no surprise that she’s discussed it openly as well. In an interview with Ryan Seacrest on his radio show, she stated, “I am definitely ‘feeling intimate.’ I’m kind of unstoppable right now. The Big O is, like, the biggest O ever!” Thanks for the heads up, Jess!