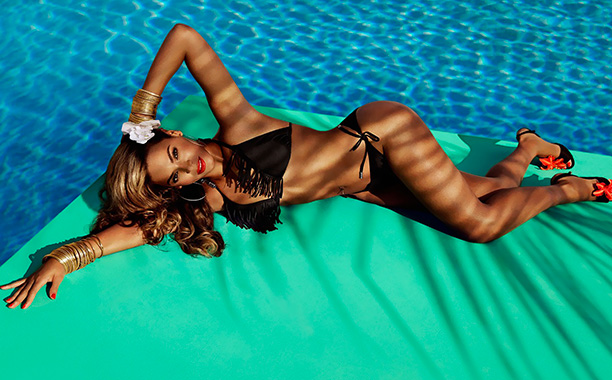 Certain things in life just make sense together: Peanut butter and jelly, Kanye West and Kim Kardashian, and celebrities and Photoshop. The latter, however, is a very tricky relationship—while some stars embrace being retouched in magazine spreads and Instagram snaps (like the aforementioned Kardashian), others have spoken out against it.

Photoshop has been a controversial topic for years, and there are some stars who truly believe that doctoring photos presents unrealistic expectations. Here, 8 celebrities below who don’t mind looking like their true selves.

1. Beyoncé: We all know that the 33-year-old is a perfectionist and likes everything a certain way—which is why she was reportedly “furious” when she saw her H&M campaign and the images appeared retouched to make her look thinner in 2012.

Apparently, she made the Swedish label ditch their selects and instead use the original photos which she was more comfortable with. Some may call her a diva, but we’re impressed she’s promoting a healthy body image—and it’s clear she doesn’t need retouching in any way, shape or form.

2. Gisele Bündchen: When you’re as beautiful as Gisele, you don’t really need Photoshop. For her recent BLK DNM campaign, shot by Johan Lindeberg, she spoke of how they avoided retouching.

“I loved his approach because I feel like women should be really real and raw and it doesn’t really happen anymore [in fashion photographs],” she told Fashionista.

“I love that feeling of, you know, we are women, we are so different, our imperfections are what make us unique and beautiful. He gets that. He’s not trying to retouch you or put a pretty light on you. He’s not like ‘you gotta look a certain way.’ He’s like, ‘you are you’ so now I’m gonna just be here with a camera, so express yourself how you like.”

3. Jennifer Lawrence: Okay, so maybe she doesn’t exactly hate Photoshop—but the 22-year-old Oscar winner is frank about how she’s often made to look better via technology. When she caught a glimpse of the recent Dior campaign she stars in, she stated: “That doesn’t look like me at all. Of course it’s Photoshop, people don’t look like that.”

4. Lady Gaga: Mother Monster has had some seriously personal experiences with Photoshop. After unflattering photos of her hit the Internet back in September 2012, she claimed that they’d been altered to make her look bigger than she is.

She responded by posting shots of her in her underwear, and admitted to past struggles with eating disorders. She also encouraged her fans to join in and share their own struggles with body image in what she called the “Body Revolution.”

5. Brad Pitt: For the February 2009 issue of W, the 49-year-old actor (then 45) refused retouching because he felt it was inauthentic. The shoot’s photographer, Chuck Close, stated: “You can’t be the fair-haired young boy forever. “Maybe a photograph of him with his crow’s-feet and furrowed brow is good for him.” Let’s face it: He looks handsome at any age.

6. Jessica Simpson: The 34-year-old singer turned designer is regularly the butt of media scrutiny—particularly related to her baby weight gain (remember that?). Back in 2010, she fired back at haters by posing for a Marie Claire spread which allegedly featured no makeup and no retouching. “I don’t have anything to prove anymore,” she told the mag. “What other people think of me is not my business.”

7. Kate Winslet: The 37-year-old British actress has had quite an interesting history with Photoshop. Back in 2003, her appearance in GQ was altered heavily to make her look slimmer, and she took a serious stand.

“I do not look like that and, more importantly, I don’t desire to look like that. I am proud, you know,” she said. In 2009, she told Harper’s Bazaar that she often makes retouchers use the original images when she sees them. “I will particularly say when I look at movie posters: ‘You guys have airbrushed my forehead. Please can you change it back?'”

8. Coco Rocha: In 2012, the mega-model slammed Elle Brazil for Photoshopping her to look somewhat nude. “I recently discovered that the body suit was Photoshopped out to give the impression that I am showing much more skin than I actually was or am comfortable with,” she wrote on her blog. “This was specifically against my expressed verbal and written direction.”
Tags:
StyleCaster