The Met Gala was literally lit last night—and we’re not just talking about Rihanna. The eagle-eyes at Marie Claire caught another bizarre trend that didn’t make it to the official galleries: Everyone was smoking. Like, everyone. On camera. Without shame. What?

Bella Hadid, Slick Woods, Dakota Johnson, and Paris Jackson, all skipped out on the Gala for a moment to sneak off to the bathroom—and smoke. Pretty unglamorous.

While we passed along the images in Slack, we all couldn’t help but share the same disappointment: Not only is it grade-A insane to sit on a bathroom floor in couture, but don’t these women (and men—looking at you, my now-ex-husband Rami Malek) know they’re setting an example for their collective millions of fans? While none of the major Insta-celebs actually posted it on their Instagram channels, a few Snapchatted or Insta Story’d the action—and we all know that content is anything but temporary.

A shot from Rita Ora’s Snapchat showed Dakota Johnson having a cigarette, and someone vaping in the background. Which leads me to this all-important question: People still vape? 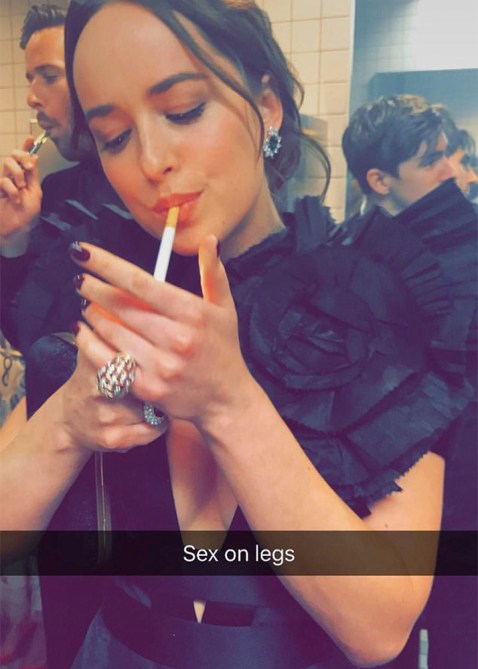 But too quickly we forget: These celebs are basically us in high school because they are in high school—at least chronologically. Most of the celebs caught with a Marlboro (or whatever the cig du jour is these days) are barely out of their teens. Bella Hadid’s 20, Paris Jackson is 19—though Lara Stone (33), Dakota Johnson (27), and Ruby Rose (31) should know better than to light up by now. Shame, shame.