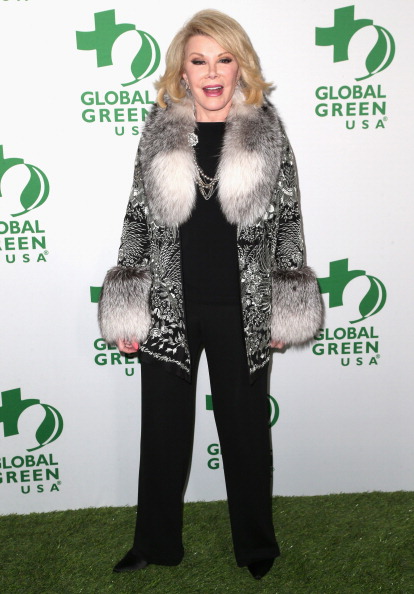 The world of entertainment lost a matchless talent today, when Joan Rivers passed away at the age of 81. A pioneer for females in comedy, Rivers was an example of a woman who—whether you agreed with her brand of humor or not—never pandered to anyone, and never quivered at the thought of being disliked. Obviously, Twitter is awash with condolences, messages, and memories from all types of people, including actors, musicians, reporters, and—of course—comedians.

Rest in peace @Joan_Rivers. Thank you for changing my life. I will miss you so much.

I love you with all my heart @Joan_Rivers my life will never be the same with out you! https://t.co/0kn2FFZDF9 pic.twitter.com/zQnXlwepXh

Joan Rivers has died. What a sad ending to a brilliant and tragi-comic life; one of the bravest, and funniest of all.

We have lost a true legend. Thank you Joan for paving the way for broads like me. Sending love and prayers to @MelRivers and her family.

NOOOOOOOO……….
RIP Joan. You will be forever missed.

So heartbroken … @Joan_Rivers we remember the laughs with tears xo

We will miss you @Joan_Rivers. What you did in your life was absolutely remarkable. Your rep for kindness to everyone was completely true

Do yourself a favor and watch the doc made about Joan. You will see what a comic really looks like.

RIP the mighty Joan Rivers. Funny & fearless. Truly one of a kind.

@Joan_Rivers a pioneer for all women… And a very sweet lady everytime she visited us on @TODAYshow. So sorry to see her go.#RIPJoanRivers

.@Joan_Rivers was a dear & wonderful friend who I've known for 45yrs. Great guest, pal, comedian & mother. We will never see her likes again

Rest in peace Joan!! You will be missed! http://t.co/pAEJ0kwFAK

She read my Wikipedia page: "you trained in Flamenco & period dance. What the hell is period dance? Does it involve tampons?"- Joan Rivers 😂

Goodbye Joan. You were a bright light till the end. What a beautiful life and grand career you shared… http://t.co/eKMZZtftRJ

Didn't know @Joan_Rivers that well, but I was one of the 481 people she followed on Twitter. So I suspect she secretly loved cricket.

So saddened by the death of yet another comic genius, @Joan_Rivers.I knew her, I loved her, and I'll miss my friend. Prayers for her family.

So sorry to hear the news about Joan Rivers. She was one of a kind. My heart goes out to Melissa and Cooper.