Couples tattoos are cool, but when you’re single (or love your best friend more than your significant other), BFF tattoos are where it’s at. Celebrity best friends, from Kendall Jenner and Hailey Baldwin to Kylie Jenner and Jordyn Woods, know this too, which is why they’ve gotten tattoos to mark their undying love for each other.

MORE: The Definitive Guide to Each of the Kardashian-Jenners’ Tattoos

Ahead, we’ve collected the cutest, most inspo-worthy tattoos celebrity best friends have gotten, from matching marks to quotes with deeper and more significant meanings. Whether you’re single or not, everyone has a best friend who’s been with them through thick and thin. Here are the celebrities who are celebrating those besties with ink.

In 2014, Delevingne and Dunn got matching “DD” tattoos on their hips in honor of the first letter of their last names. The models documented the process on Dunn’s cooking show, Well Dunn, for Jay-Z’s website, Life + Times. The video shows them running into each other before grabbing a bite to eat and spontaneously deciding to get matching tattoos. The tats were done at Bang Bang Tattoo, a celebrity-favorite tattoo parlor in New York City.

Jenner and Baldwin have been BFFs for a long time, but they made their friendship permanent in 2016 when they got matching broken-heart tattoos on the middle fingers on their left hands. Jenner’s is in white ink, while Baldwin’s is in red. Jenner also has a full heart on her right hand.

“Even though Kim always says, ‘Don’t put a bumper sticker on a Bentley,’ I really like tattoos. Right now I have two: They’re both in white ink on my two middle fingers,” Jenner wrote on her app and website at the time. “The one on my right hand is a full heart to represent an angel and my left is a broken heart—kind of like the devil side. Hailey and I have matching ones on the left side but hers is red.” 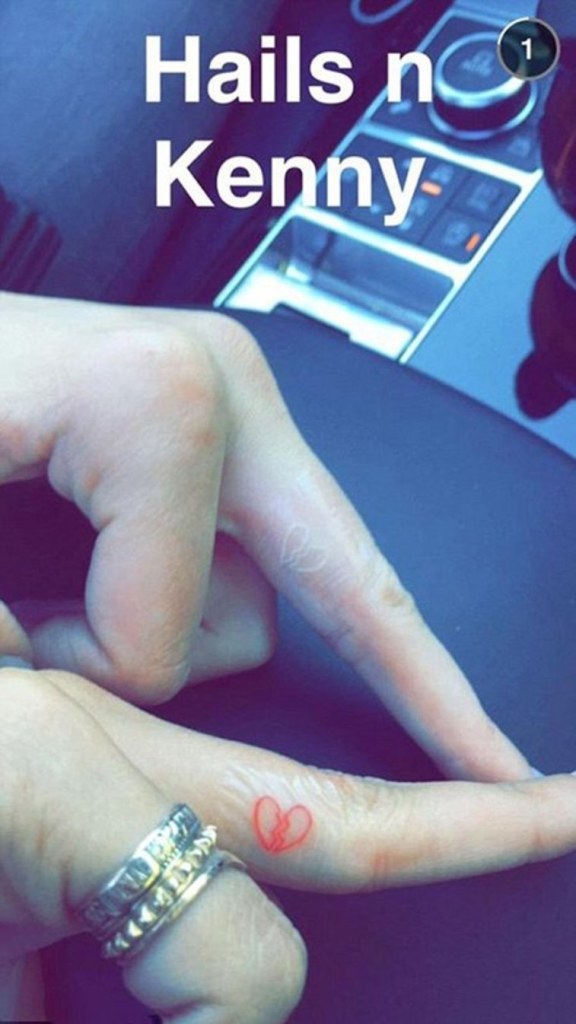 To this day, no one knows what Woods’s and Jenner’s matching tattoo means. The best friends inked the letter M on their pinkies in 2016, which look more like a long squiggly line than a letter.

To commemorate their time on Game of Thrones, Turner and Williams inked 07.08.09 in the middle of their arms. The date is when both actors found out they booked their roles on the HBO show. “We always said that we wanted them so we got the date 07.08.09 on our arms because that’s the date that both of us found out we’d got our roles in Game of Thrones. So when we had a day off from filming in Belfast we just went to a tattoo place and got it done,” Turner told Elle UK

On their last-ever day of filming on Pretty Little Liars in 2016, the six leads got tattoos on their index fingers. Each actor tattooed the first initial of their character’s name. The tattoo nods to the theme song of the show, which shows one of the characters shhh-ing with her finger to her mouth. Apparently, Mitchell was hesitant to get it because of the pain. “I didn’t want to be a part of this at all!” Mitchell told Refinery29. “Not because of the permanent factor, but because it’s painful. And on your finger, it’s even more painful!”

In 2014, Duff and Masterson, who stars on The Walking Dead, got matching ghost tattoos on their forearms. The tattoos feature two ghosts with the words ride or die at the bottom of their cloaks. It’s unclear what ghosts mean to the friends, but the quote speaks for itself.

While filming 2016’s Suicide Squad, Robbie and Delevingne got matching smile-face tattoos on their toes. Delevingne got a smiley face with its tongue sticking out and Xs over its eyes, while Robbie got smiley faces on each of her toes. Turns out, Robbie did Delevingne’s tattoo herself. “We did toe-mojis, we were calling them, where we’d tattoo the bottom of our toes with, like, little faces,” Robbie said on The Tonight Show with Jimmy Fallon. “But, uh, the thing about tattooing the bottom of your toes is that it rubs off after a while, so we have to keep redoing them.”

Rihanna and Drake’s friendship has been rocky, but in 2016, it was close enough for them to get matching tattoos. Both musicians have camouflage-printed sharks on their bodies. Rihanna’s is on her ankle, while Drake’s is on his forearm.

Cyrus and Pataky might be new friends, but they’re as close as family. (Pataky is married to Cyrus’s boyfriend Liam Hemsworth’s older brother, Chris Hemsworth.) In 2016, they got matching tattoos, along with a few other friends, of a small hand-drawn wave on different parts of their bodies.

As a symbol of their friendship and their time in One Direction, Malik and Tomlinson got matching Bus 1 tattoos on the side of their hands. The tattoos nod to the bus they stayed in together while on tour. Though fans have accused Malik of removing his tattoo, he denied the claims, explaining that his tattoo is simply fading.