Cecily Strong has stepped into the shoes of everyone from controversial conservatives (Megyn Kelly, Melania Trump) to over-the-top television stars (Sofia Vergara, Khloé Kardashian) to beloved pop divas (Christina Aguilera, Ariana Grande). But the character she refuses to play is “the hot girl from work,” a recurring archetype for shallow, one-dimensional women she saw time and again at the start of her career.

While Strong admits that Hollywood has come a long way from the “world of girlfriends and bikinis” she was once bombarded by, she’s hyperaware of the major progress yet to be made. “Every year it gets better and you start seeing more representation,” says Strong, who recently partnered with Triscuits to promote its move toward non-GMO products. “But it’s still pretty bad.” 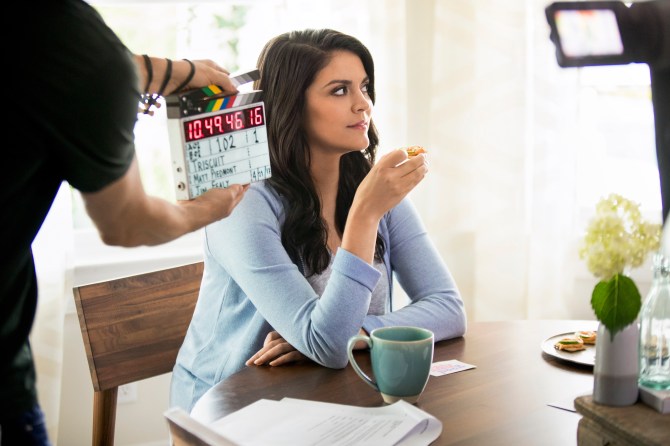 Strong’s career began in theater, though she had an interest in comedy after taking her first improv class at 9 years old and growing up watching old “Saturday Night Live” reruns with her mom. After college, she moved cross-country to Los Angeles to try to make it as an actress. However, after constantly seeing parts for “hot chicks” and “disappointed girlfriends,” Strong quickly realized that Hollywood wasn’t what she hoped for. “I was sort of like, ‘I don’t know where I fit in this world of girlfriends and bikinis.’ That’s not what I do,” Strong says. “It was really difficult to figure out.”

After sticking it out for a few months, Strong moved home to Chicago to pursue a career in improv. And though she quickly climbed the ranks in the comedy world—scoring a coveted spot at The Second City, an esteemed comedy venue in Chicago known for launching stars like Stephen Colbert and Tina Fey—Strong didn’t find the treatment of women to be any better.

I don’t know where I fit in this world of girlfriends and bikinis. That’s not what I do.

“Even when I was in Second City, I had tough experiences with some of the men, and people telling me, ‘Well, they get to be angry to you,’” Strong says. “A lot of improv theaters are going through fights with sexism and sexual harassment and the way they treat girls and female voices. The improv world has been such a straight, white-guy thing. You have to expect to deal with the angry man and you have to put up with it. That’s a stock character. That’s a thing we do here.”

And though Strong recognizes that things are steadily shifting for women in Hollywood, with the success of female-led comedies like “Bridesmaids” and “Girls Trip” she admits that she’s still plagued by the same stereotypical roles she saw early in her career. Strong channeled the experience into her iconic “SNL” character, “A One-Dimensional Female Character from a Male-Driven Comedy.”

“You get scripts sent to you and you’re like, ‘Oh my god. This wife doesn’t even get to choose the baby’s name? And she’s not even talking about her pregnancy? The men are? What is going on?’” Strong says. “I’ve had so many auditions where I went in as ‘the hot chick from work,’ and they always say, ‘You guys really need to grow up.’ That’s always the theme. The men get to be the ones going through every journey.”

In so many big movies, the female roles aren’t played by comedians because they don’t have to be funny.

Strong believes this overt sexism is why women are rarely cast in comedic roles for big Hollywood blockbusters. “I still read scripts where I’m like, ‘This is a great cast. It’s a great group of people. But this part sucks, so I’m not interested,’” Strong says. “You can look at so many big movies and all the female roles are not played by comedians because they don’t have to be funny.”

For Strong, progress happens behind-the-scenes, by hiring more diverse writers, directors, and producers. “We go into a writers’ room and 80 percent of the people are going to look alike, sound alike, and talk alike,” Strong says. “I always jump at the chance to work with a female director. I think it makes any project better to be more diverse. I think you have better odds.”

[SNL] was the one show that got under Trump’s skin the most.

Strong’s social awareness is why she believes politics and comedy—including “Saturday Night Live,” which returns for its 43rd season on Saturday—are so intertwined, especially during the presidency of Donald Trump. “For whatever reason, we were the one show that got under Trump’s skin the most. But I think we were also there when people absolutely need to laugh,” Strong says. “That’s how people in comedy deal with their lives, anyways. In pain in life, it’s finding a way to laugh at everything. I’ve laughed a lot at funerals. Cry hard and laugh hard.” 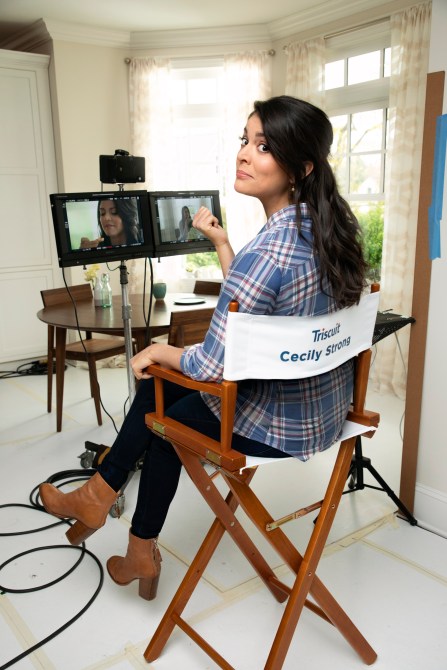 And though Strong wants to be abundantly clear that “women have been funny forever,” she also acknowledges that there’s a palpable zeitgeist for minorities wanting to see themselves represented. “I think there’s an audience for wanting to hear yourself on stage, and not just yourself being like, ‘That’s me if I were a white straight man,’” Strong says. “You want to hear your voices and your unique experiences.”