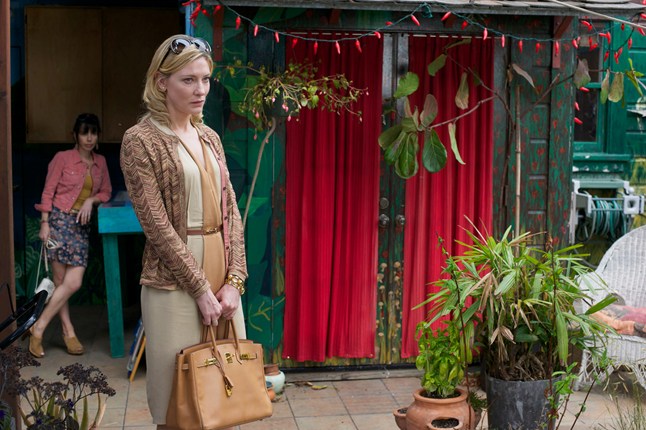 For her recent turn as the titular character in Woody Allen’s “Blue Jasmine,” Cate Blanchett plays a woman fallen from the highest rungs of New York society, forced to move in with her less-wealthy sister to make ends meet.

MORE: Cate Blanchett’s Directorial Debut Will Be A Psycho Thriller

Jasmine seemingly lost everything, except for a few precious items she kept from her previous closet: a Birkin bag, Chanel pearls, and a set of Louis Vuitton luggage. When her sister asks how a “broke” woman afforded a first-class flight, Jasmine desperately responds, “I don’t know, I just did!” All to say: her taste for high fashion and luxury is a major part of her character.

But the incredible fashion Jasmine wears didn’t happen so naturally, according to an interview Cate recently did with Vogue UK—mainly because her director doesn’t place too much importance on a character’s style.

“He’s been wearing the same Ralph Lauren sweatpants and T-shirt for the last 20 years and doesn’t understand why anyone would change their wardrobe according to their mood, or how they want to present themselves,” Blanchett told Vogue UK. “He just doesn’t get it.”

This revelation is particularly interesting since some of Woody Allen’s characters—Annie Hall comes to mind right away—have been iconic in the fashion world. Head over to Vogue UK to read more of Cate’s fascinating interview!