Alan Breslauer, founder of Los Angeles-based Custom Catios, is trying to rectify a world that hasn’t figured out how to treat cats right. “Some people get a cat and think they don’t have to take care of it,” Breslauer tells StyleCaster. We’re so much more advanced with dogs, in how we take care of them and think of them. We have dog walkers, doggy day care, a whole dog industry—because you can’t leave your dogs home all day. People are starting to realize that cats have needs too.”

Breslauer argues that neither the outdoors nor the indoors is exactly right for cats. “[Cats] kill billions of birds and other small animals every year,” Breslauer says, adding that the environment can be just as dangerous to them. “There are coyotes, cars, poison—all conspiring to take years off your cat’s life.” The indoors, of course, presents its own issues. Lack of exercise and stimulation can leave a cat bored, obese and destructive. “[Cats] can jump 5-7 times their body length, they have super hearing, they can see in near pitch black,” Breslauer says. “You have to create environments for them where they can utilize their senses.” Otherwise, you get what Breslauer calls “stress relieving behavioral issues”—the kinds of classic cat antics, like clawing furniture and being aggressive, you’ve probably witnessed if you’ve ever stayed up late enough to catch an episode of My Cat From Hell.

It was this seeing kind of behavior in his own cats, Monkey and Cooper, that spurred Breslauer to build his first catio (which by this point you’ve almost certainly guessed is a portmanteau of “cat” and “patio”). Catios come in a variety of sizes, price ranges and styles, but the goal is always the same: allowing cats access to the outdoors while keeping them safe. 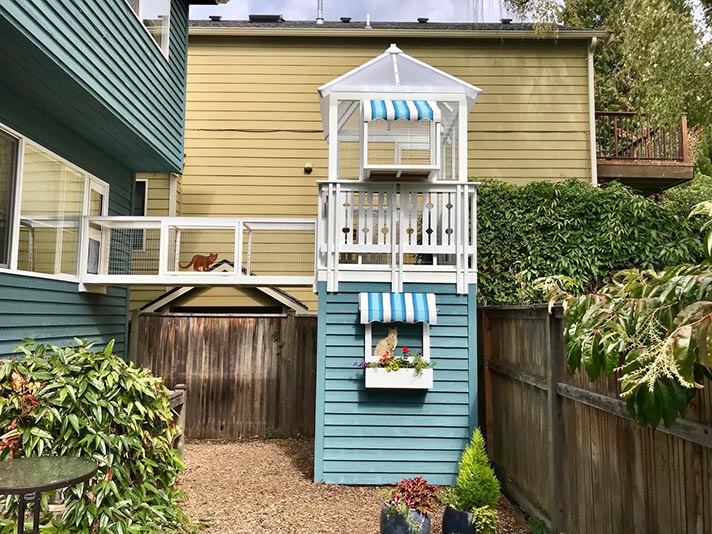 Breslauer’s first catio was a DIY job he constructed himself on the balcony of his apartment in Westwood, California. And his cats’ behavior improved immediately. The extra space turned out to be crucial for them—the vertical space especially so. “Cats are much more interested in vertical space than square footage,” Breslauer says (a Hot Tip for any aspiring catio architects out there). Having shelves and spaces on different levels also gives cats a way to establish their hierarchy, while reducing squabbling—making them a staple in any catio, especially those Breslauer builds for fellow cat parents.

“We try to create a really fun environment,” Breslauer explains. He’ll often include not just shelves—but ramps and places to run, too, so the cats can get exercise while enjoying themselves. “It’s like cat Disneyland,” he adds. “We’ll put in a floor-to-ceiling sisal rope climbing pole. You could buy a sisal rope pole at Petco, but it’ll only be 2 feet tall. Ours is 10. It’s awesome watching a cat scamper up at full speed—you can sense their joy.” 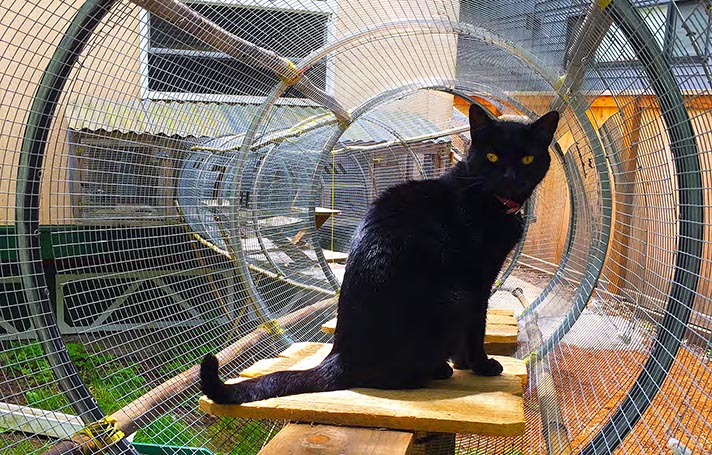 Courtesy of Cats Safe at Home.

When it comes to building a catio, Breslauer and his team are drawn to a challenge. “I love anything that’s different or new,” he says. “We love to show the world what we can do.” Breslauer’s team recently built a floating catio that extended from a wall to avoid the pipes below; a 15-foot, 8-level catio with a Spanish tile roof to match the house; and a colorful space with bright green meshed shelves for an artist. “We also did one with a 30-foot ramp,” he says.

Breslauer and his team have developed their own well of knowledge for this extremely niche industry. “There aren’t any books about catios,” he says. Over time, they’ve amassed an array cat-specific tricks of the trade they’ve learned along the way. “For example, if you just paint shelves and put them in the catio, they’re going to get slippery if it’s dewy or raining in the morning, and your cat could fall,” he explains. “We paint the shelves with a rubber material used for kids’ playgrounds that gives the cats extra grip. Most people wouldn’t have any idea to do that.” Breslauer says his team has developed such immense expertise in the catio space that they even know how to space out shelves for optimal cat jumping. 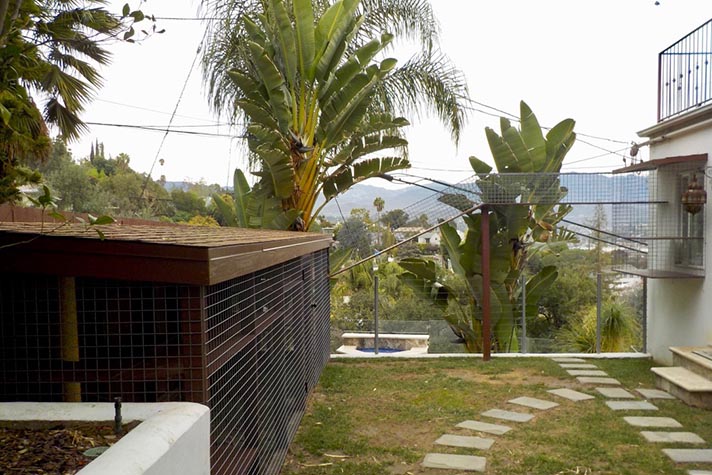 Further North, in Seattle, Cynthia Chomos, founder of Catio Spaces and locally crowned Catio Queen, uses her feng shui training to create beautiful spaces that cats (and their humans) can enjoy. “Catios can complement a home and garden,” Chomos says. “It doesn’t have to look like an unsightly cage.”

Her first inspiration was her tabby Serena, who “appeared in a dream” after the loss of Chomos’ previous cat and currently has four catios of her own. “Cats are natural feng shui experts as far as I’m concerned,” Chomos says. “They’re constantly positioning themselves to have a commanding view and know what’s going on in their environment, and all that plays into the psychology of space. They’re super sensitive to their space and very discerning.” 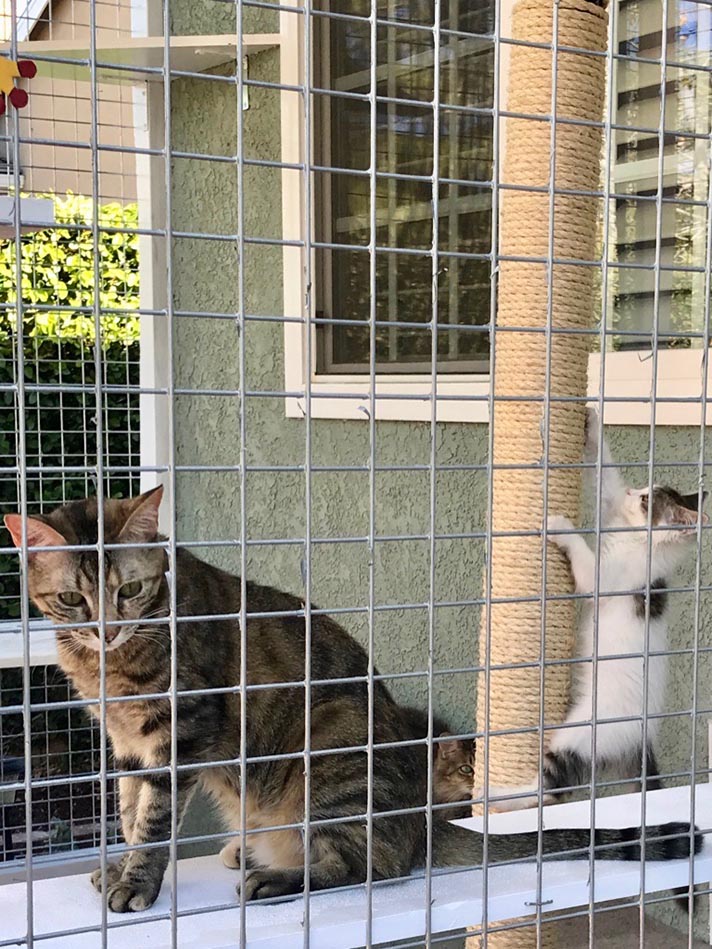 One of Chomos’ biggest assets is being able to think like a cat. “My carpenters tease me, ‘She’s going into cat mode!'” Chomos says. “I’ll tell them a shelf’s too high—a cat’s going to want to jump here or look at birds over there. You have to put yourself in the position of the cat.”

Some of Chomos’ favorite projects are geared toward special needs cats. She recently built a space for a pair of cats with cerebellar hypoplasia, a condition that limits their fine motor skills, balance and coordination. To complicate the build further, the cats live with their owner on a houseboat. Chomos did research into the cats’ condition and interviewed the client to figure out the ideal catio for them. (She knew “there would be a lot of falling going on with them because of their balance, plus they’re on a houseboat.“)

Chomos used foam tiles, railings, and grippy rugs to keep the cats from hurting themselves. She even built a railed ramp up to an elevated lounge so the cats could watch people and boats pass by, and the community could see them too. “Everyone would walk by and see the cats,” she says. It was a special experience for Chomos to give these cats a catio made specially for them. “Every can can benefit from a catio, but the special needs cats are extra special to me. I love being able to be a part of their enrichment—and they’re just the cutest cats.”

Chomos has lent her skills to a number of more eccentric catios, including a literal cat castle she repurposed from an old playhouse the owner was going to tear down. “Princess Penne’s Cat Castle” will be appearing on this year’s Seattle Catio Tour, along with a few catios constructed from DIY plans Chomos has available on her website. 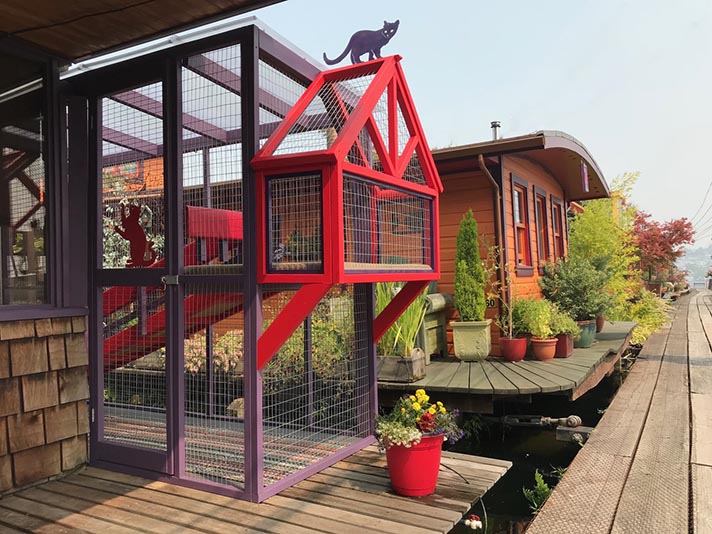 Catio tours have been spreading throughout the country as a way for cat lovers to come together, swap knowledge and take notes, but it all started in Portland with an organization called Cats Safe at Home. One of the founders of the first catio tour, Karen Kraus, tells StyleCaster she was inspired by a chicken coup tour a different group was putting on in Portland. “I thought, it’s not that far a leap from chicken coops to catios,” she explains.

As executive director of the Feral Cat Coalition of Portland, Kraus says catios align with the Coalition’s goals. “When an owner keeps their cat in a catio, they’re not adding to the number of animals living on the street.” The Portland chapter of the Audubon Society was also interested in catios as an avenue for keeping wildlife safe from cats. “It really shouldn’t be missed that there is a chapter of Audubon working with a feral cat program,” Kraus says. “Both of us want to see fewer cats outside and engage the community in a positive way. It’s better for cats and better for wildlife.” The two organizations combined with a few others to create Cats Safe at Home, and by extension, the catio tour. 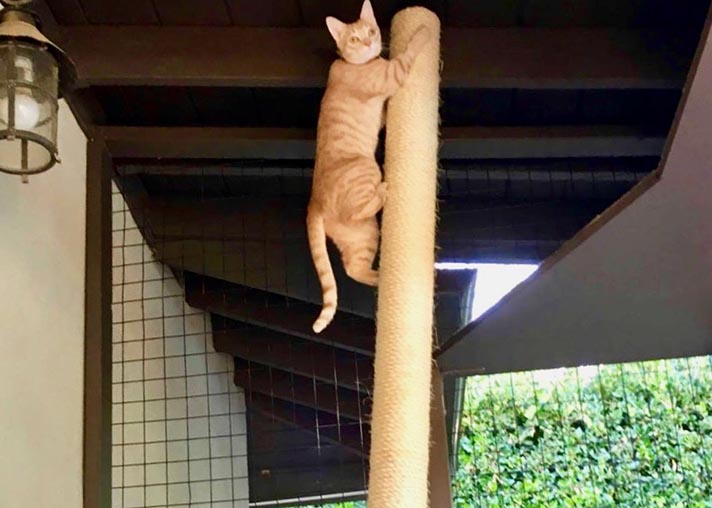 When the first catio tour launched in 2013, Kraus expected a couple hundred people to attend. She was blown away when the final cutoff reached 670. “The desire to attend was immediately present,” she says. Last year’s catio tour hosted 1,300 attendants with a waitlist of more than 200.

Each year, CSAH hand-selects between 10 and 12 catios in the area that are relatively close together—patrons are given a wristband and a map and can wander freely between locations for the duration of the tour. Kraus says they always make sure to pick a wide variety of catios so guests can see the full span of possibilities, and the tour has never repeated a catio in the six years they’ve hosted the event. Their primary way of finding new catio hosts? Reaching out to last years’ attendees—many of whom have been inspired to build their catios of their own.

Kraus says the Catio Tour’s goal is to educate and inspire. “When we see people applying who have been on the tour and now have a catio, we directly know we made a difference,” she explains. Though most of the tour’s attendees are first-timers, a handful are catio owners returning because they want to learn how to embellish their build. “I can’t tell you how many people go ‘That’s going to work in my yard,’ or ‘I never thought of that,'” Kraus says. “It’s different in person. You can only see so much online.” 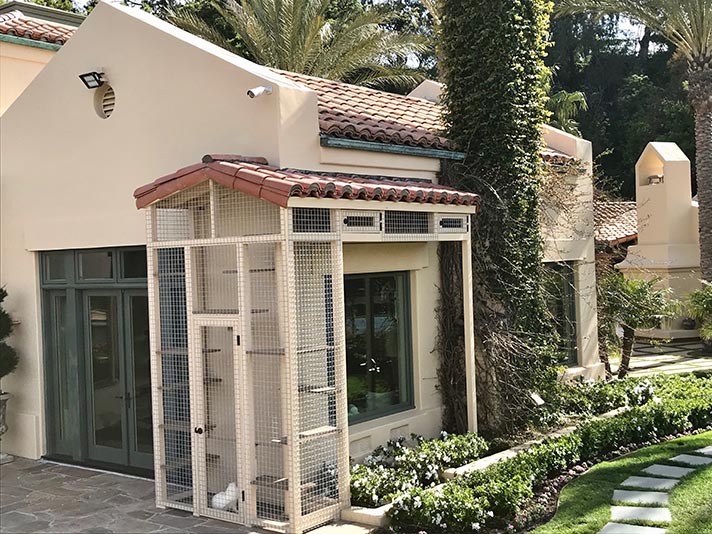 The tour has checkpoints at every catio, so Kraus and her team can tell which stops are the most popular. Which catios do people love the most? “They love to see things that make them dream. They want to see things that they can’t have—it’s like a tour of amazing homes,” Kraus says. “But they also really like the ones that are DIY. They love to see the ones that are fancy, but they relate to the ones they can build themselves or afford.”

Kraus remembers a year when one stop featured a catio for multiple feral cats with an overhead walkway and indoor and outdoor spaces. “It was beautiful, and it was thousands of dollars,” she says. The same year, another host bought metal shelves, zip-tied them together and hung them outside a window. “That catio was the most popular [that year], because people could relate to it,” she says. Kraus’ own favorite was a DIY catio called the Taj Meow.

One of the best things about the tour is its unique capacity to bring together a community. Kraus explains that dog people have every opportunity to meet each other at dog parks or on walks, but for cat folks, those opportunities are few and far between. Naturally, she sees the tour as a great time for bonding. “It’s a really nice community building activity for people who love cats. There aren’t a lot of activities they can go on and be around other like-minded people,” she says. “Don’t underestimate the cat people getting together—I really think there’s something about it.”