The honeymoon phase has officially ended. “It’s not you, it’s me,” Solomon said as we cuddled under the blankets and watched Tiger King in one sitting. The belly rubs that used to send his tail wagging don’t work the way they used to. Apparently, I’m smothering him. I thought preparing breakfast and dinner every day, showering him in gifts and you know, keeping a roof over his head, were more than enough to keep the spark alive. But alas, here I am contemplating the unthinkable—inviting a third party into what I thought was a happy home. In other words, a second cat adoption.

For the record, I’m single. I’m just saying, being stuck at home has either given me mind-reading superpowers or made me completely nuts. Maybe both. I just know that Solo is sick and tired of me. That blank stare I always translated as “smiling on the inside” looks more like “um, seriously?” as I obsessively spray his window sill with Lysol or put my work station in front of his bed….and stay there for 8 hours. 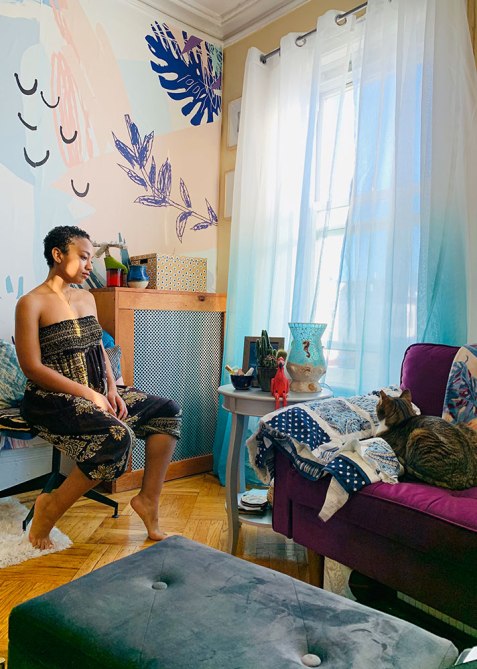 And he’s definitely judging when I wear the same sweatpants three days in a row or “get ready” for a Zoom call. In short: the cat thinks social distancing has made me a slob despite knowing that there’s some lag time between my mental psyche and daily schedule adjusting to this new normal. He knows this because he definitely eavesdropped on my virtual therapy sesh, too.

Or maybe this is one of those hurt people—er, cats—hurt people moments. I’ve never gotten a straight answer on whether cats like living with other cats, but he looks kind of sad too. Normally, Solo plays fetch like a dog, but now he sort of just looks at his toys in disgust. 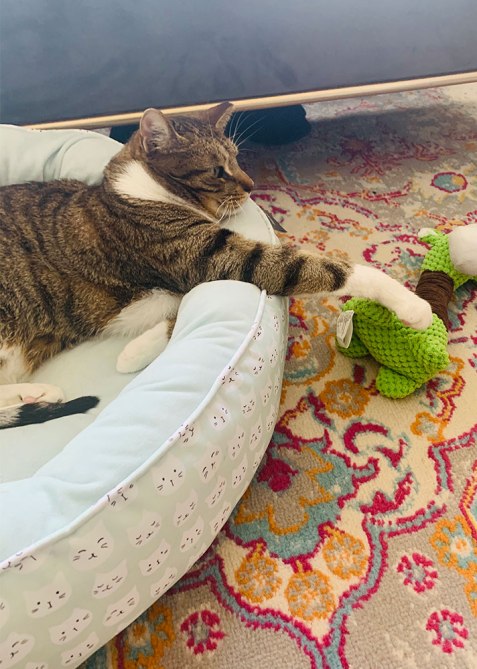 And window-gazing that used to consist of his head darting back and forth to look at birds has settled into a blank stare (like mine, TBH.) 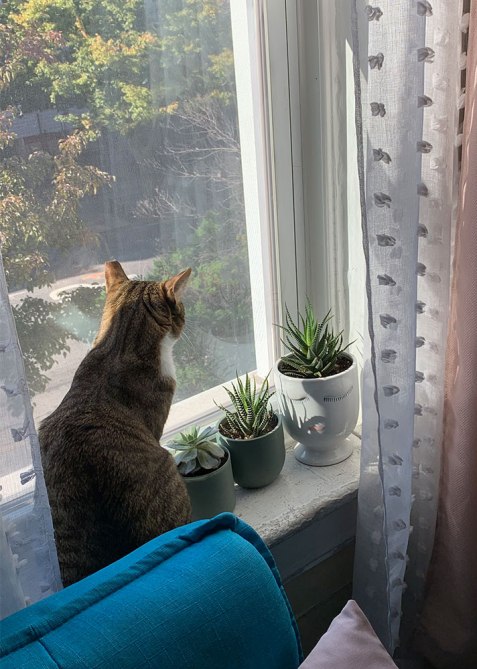 So maybe he just needs a friend who looks like him—representation matters for animals too, people! Or maybe I just want an excuse to warm my cold, single heart with another pet. It’s always been in the back of my head and now that I’ve exhausted my Netflix queue and given up on basically bathing in ointment every day, I’m seriously considering it.

Plus, stories of animal shelters being in crisis amid shelter-in-place orders only helps my cause. Solo and I locked eyes at an event for rescue cats and it’s been bliss (or so I thought) ever since. Repeat success or adopter’s remorse? This is all I keep replaying as I contemplate taking the plunge. We may get along now, but what happens when I go back to a daily commute and they’re left to their own devices for hours at a time?

At this point, only time and/or a second cat will tell. I always thought that by virtue of being a pet owner, I was more sensitive to a cat’s needs. Admittedly, the appeal of cats is that while they make for adorable sidekicks, they’re also happy to be left alone and do their own thing. You can basically keep them at arms-length, talk without being interrupted and still feel a certain closeness that only pets bring. If only relationships with men were this easy.

However, completely unexpected situations put literally everything in perspective; from our jobs to friendships (with humans) to co-existing with our furry friends. Mind-reading antics and jokes aside, I actually think I’m doing a pretty good job. But because of the unpredictability of, well, everything, I still haven’t committed to a second adoption or foster. Admittedly though, I have at least started filling out applications.

Here in New York City, a lot of the bigger organizations are completely closed to curtail foot traffic and respect social distancing orders. Instead, some of them including the ASPCA and Humane Society are doing their part with free pet pantries for owners with financial difficulty and general home care tips on their websites. Mid-tier organizations with a foster network and shelter space have also cut down hours drastically.

Knowing what shelters are and aren’t open really depends on your location, but I’ve found that reaching out to local rescues with foster networks (aka cats being cared for in homes) is your best bet if you’re teetering the line like me or ready to dive headfirst into animal adoption.

The good news is that there is no shortage of smaller local organizations who are happily offering cats to foster or adopt. Though I can’t obviously speak for every city, Brooklyn Animal Action, KittyKind, and Brooklyn Cat Cafe have been helpful for me. The bad news? If your heart is set on one cat and you don’t act quickly, he or she could be gone by the time you decide to reach out. Overall, I’d recommend making a final decision before you even start researching and of course, know whether you can handle the financial and physical commitment pet ownership demands.

If you do end up becoming a cat mom or dad, just be sure to never go to bed angry, give each other space and most importantly: keep the catnip coming.