And Just Like That—whose full title is And Just Like That…A New Chapter in Sex and the City—is a reboot of HBO’s comedy series, Sex and the City, which ran for six seasons from 1998 to 2004. The show, which was based on Candace Bushnell’s 1997 book of the same title
, followed four women in their 30s and 40s—Carrie Bradshaw (Sarah Jessica Parker), Samantha Jones (Kim Cattrall), Miranda Hobbes (Cynthia Nixon) and Charlotte York (Kristin Davis)—and their sex lives in New York City. The show went on to win four Emmy Awards (including Outstanding Comedy Series in 2001) and release two movies, Sex and the City: The Movie in 2008 and Sex and the City 2 in 2010.

In January 2021, HBO announced that a Sex and the City reboot,  titled And Just Like That, was in the works for HBO Max. The reboot sees the return of each of the main cast members—except Cattrall, who has retired as the role of Samantha amid her feud with SJP.  “Woke 2 a @MailOnline (poop emoji) storm! The only ‘DEMAND’ I ever made was that I didn’t want to do a 3rd film….& that was back in 2016,” Cattrall tweeted at the time after rumors that she was the reason a third Sex and the City movie was cancelled. In an interview with Piers Morgan at the time, Cattrall also confirmed her feud with SJP and claimed her co-star “could have been nicer” when they worked together on the original Sex and the City series and two movies. “We’ve never been friends,” she said. “We’ve been colleagues and, in some ways, it’s a very healthy place to be.”​ She continued, “I don’t know what her problem is. I never have.” 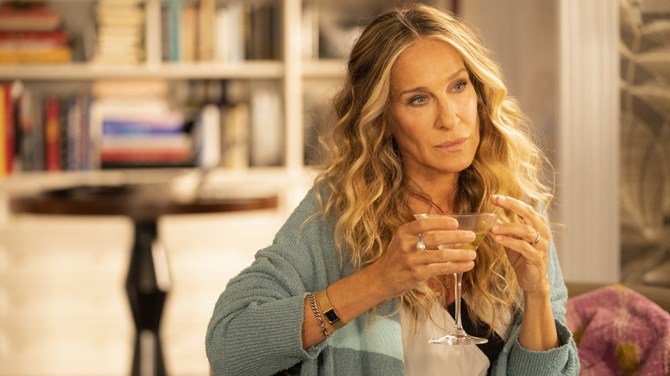 Does Carrie have dementia in And Just Like That?

Does Carrie Bradshaw have dementia in And Just Like That? Carrie’s dementia hasn’t been confirmed yet, but there have been clues about it in Sex and the City reboot. The first clue was in the second episode of And Just Like That when Carrie and Miranda have a conversation in her kitchen the morning after Big’s death. The scene sees Miranda ask Carrie where she keeps her coffee, which she ignores. When Miranda asks her again, Carrie tells Miranda that her coffee is in the freezer. Miranda then tells Carrie, “I’m going to make us some,” to which Carrie asks, “Some what?” Miranda turns back around from the refrigerator and looks at Carrie with concern before she repeats that she’s going to make them some coffee. Carrie simply nods.

The scene led to theories that Carrie has dementia in And Just Like That. “not Carrie with the dementia storyline…..” tweeted user @deaditeslasher. User @BurgundyTamale tweeted, “Y’all catch that in episode 2?? Carrie is at the beginning stages of Dementia. The coffee in the freezer is a sign. Placing things they’re not supposed to be.” “Carrie got dementia?!! #AndJustLikeThat wtf is happening. This reboot bouta make me pass out,” wrote Twitter user @KaniseOfficial. Twitter user @JenKirkman wrote, “Wait people think they’re setting up Carrie to have dementia? I thought she just forgot during the Miranda making coffee scene cuz she was exhausted and grieving and preoccupied.”

According to the Alzheimer’s Society, putting items in “unusual places”—such as coffee in the freezer—is a common sign of dementia. “People with dementia often lose items as a result of their memory loss,” the Alzheimer’s Society writes. “They may misplace common items, such as glasses or keys, or put an item somewhere for safekeeping and then forget where it is. They may also leave items in unusual places —for example, leaving the remote control in the bathroom, or tea bags in the fridge.” (While some theorize that Carrie’s coffee in the freezer is a clue about her dementia, others believe that she stored her coffee in the freezer to keep it fresh and maintain the aroma longer.)

Another clue that Carrie has dementia in And Just Like That could be the inclusion of Miranda in the scene. In Sex and the City, Steve Brady’s mother and Miranda’s mother-in-law, Mary brady, has Alzheimer’s, a neurogenerative disease that is the most common cause for dementia. Mary’s first sign of Alzheimer’s was seen in the series finale of Sex and the City, “An American Girl in Paris: Part Deux,” which sees Mary slur her words and refers Steve as “Lil Stevie.” Steve takes Mary to the emergency room, where a doctor tells him that Mary likely had a small stroke a week prior, which resulted in some memory loss. He tells Miranda that he wants his mother to stay with them for the night and that he’ll go to her apartment to get her nightgown and a change of clothes. However, when Steve arrives at his mother’s apartment, he and Miranda are shocked by the state of filth it’s in, with dirty dishes everywhere. Miranda then offers for his mother can live with them. “Why else do we have that big house?” she says.

The episode continues with Steve’s mother thinking that Steve is younger than he is and telling him that he wants to take him to the zoo. Distracted, Miranda doesn’t notice Mary putting on her coat and leaving their house. She looks all around Brooklyn for Steve’s mom and finds her eating pizza out of a trash can. Miranda takes the pizza out of her hand and helps her back home, where she gives Mary a bath. Magda, Miranda and Steve’s housekeeper, sees Miranda and Mary and commends Miranda for caring about Steve’s mother so much. In Sex and the City: The Movie, Miranda confirms Mary’s condition when she tells Steve that she has a “mother-in-law with advancing Alzheimer’s at home.” Anne Meara, the actress who played Mary, died on May 23, 2015, so she won’t be in And Just Like That, but Miranda’s experience with Steve’s mother’s dementia may be why she’s so attune to the signs in Carrie.

The Alzheimer’s Association defines dementia as a “general term for loss of memory, language, problem-solving and other thinking abilities that are severe enough to interfere with daily life.” The organization continues, “Dementia is not a single disease; it’s an overall term—like heart disease—that covers a wide range of specific medical conditions, including Alzheimer’s disease. Disorders grouped under the general term ‘dementia’ are caused by abnormal brain changes. These changes trigger a decline in thinking skills, also known as cognitive abilities, severe enough to impair daily life and independent function. They also affect behavior, feelings and relationships.”