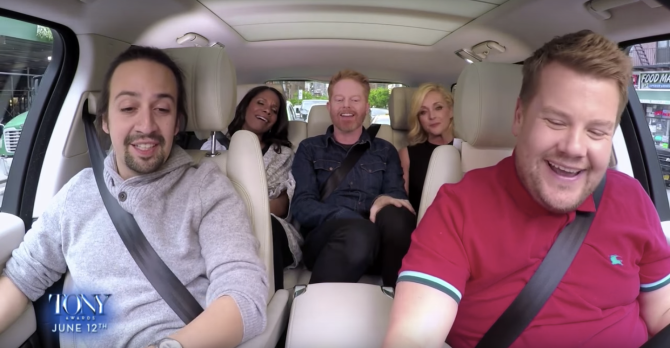 Because James Corden is hosting the Tony Awards on June 12 and we live in a world where anything is possible, we were greeted by a Broadway edition of Carpool Karaoke this morning from last night’s “Late Late Show.” The comedian took to the streets of New York with Lin-Manuel Miranda, Jane Krakowski, Jesse Tyler Ferguson, and Audra McDonald to perform Broadway hits.

The video opens with just Corden and “Hamilton” creator and star Lin-Manuel Miranda performing the musical’s title track, “Alexander Hamilton.” Then they just happened to spot Jane, Jesse, and Audra on the street and pick them up, so the five could sing “Seasons of Love” from “Rent,” “Can’t Take My Eyes Off of You” from “Jersey Boys,” and “One Day More” from “Les Miserables.” Watch the whole thing below.