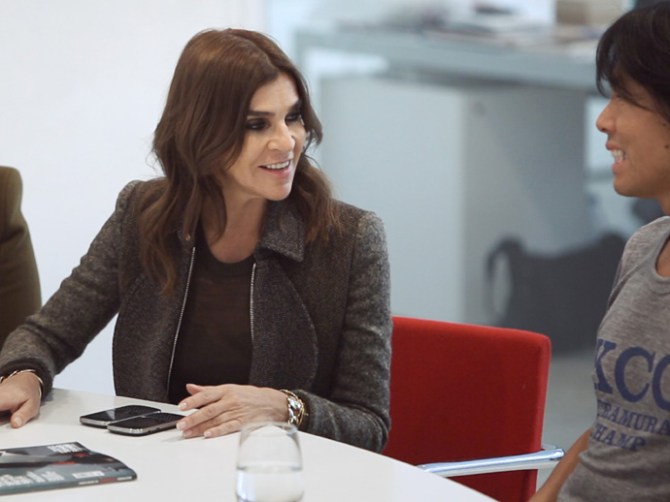 Carine Roitfeld is essentially a fashion legend. In the 1990s, she collaborated with Tom Ford on what are now iconic Gucci advertisements (remember the pubic hair shaved into a “G” logo ads? That was Roitfeld’s influence.) Next came her highly influential tenure at French Vogue as Editor-in-Chief, where she was renowned for her boundary-pushing editorials—including putting a drag queen on the cover.

In 2010, Roitfeld left Vogue, and launched her own high-fashion magazine CR Fashion Book in 2012, and recently shot a very pregnant Kim Kardashian in a gold grill for the cover.

Lucky for us, the journey of getting CR off the ground was captured in a documentary—”Mademoiselle C”—directed by Fabien Constant and in theaters September 11. The film is, at its core, a behind-the-scenes glimpse at the fashion industry in a way only Roitfeld could provide. Watch her, for instance, collaborate on a Sleeping Beauty-inspired shoot with Tom Ford, hang out with Karl Lagerfeld at Cannes, and work on a shoot with Bruce Weber, Kate Upton, and babies (yes, babies)) for CR’s first issue.

We sat down with the 58-year-old Roitfeld to discuss what it’s like being following around by cameras for a year, what she thinks about social media, and even what she eats (and drinks.) Read on for the scoop!

StyleCaster: Tell us how this documentary came about.
Carine Roitfeld: Fabien [Constant, the director] really just asked me to do this documentary about my new magazine CR [when I was preparing to launch it]. Since I wanted what was best for my new magazine, I said “okay let’s do it!” What I didn’t know is that it would be so personal, and I didn’t know that it would be so scary. When you start a new magazine you are in meetings with people that you don’t know very well—and then to have a camera there too was a lot of stress for me, and a lot of stress for my team as well. But we still had fun, which means he did a good job.

Any cringe-worthy moments when you watched the footage back?
It’s very honest, it’s everything that we did. It is the good and the bad. Because I am a control freak, maybe I would have edited it completely differently, but in a way it was good therapy to see it through his eyes. It is not a reality TV show, this is through the eyes of a director. And I’m definitely not an actress.

One theme the documentary brings up is how famous you’ve become. Is it strange to be recognized on the street?
They don’t recognize me all of the time on the street—during fashion week maybe. I will not say that I am not happy that people recognize me. You say, “Oh you recognize me, you love my work, that’s so nice.” When someone asks to take a picture with me, I feel a bit odd, and think I am going to looks stupid, but I always do it because I think it is brave of them to ask me for a picture. ]

What was it like leaving Vogue? You mention in the documentary it was like “leaving your crown.”
I’m not sad to not be at French Vogue anymore. I think it was genius to be there for 10 years—it was a beautiful magazine, a beautiful name. But suddenly now it is more me. When I was working for French Vogue I had the car, the big team, the help, and I now I am working for myself and I am more on my own with my Blackberry. But freedom is something amazing that when you touch it again you don’t want to lose it, and I don’t want to go back to a magazine like that.

You’re a pretty old-school editor and have—for the most part—stayed away from social media. Why?
I am a bit anxious with all of these things like Twitter. I don’t have an Instagram account, so far, for example. I don’t Google my name each morning. You can get addicted very often. And I do think for some kids who have a nice life but not an extraordinary life—like a model or a photographer—they see someone else’s life looking so easy, and they can be very disappointed with their own life. Everyone wants to be someone, everyone wants to have an opinion, everyone wants to shine. Yes that is normal, but it is also dangerous.

What do you hope people learn about you after watching this?
You can see that you can be an editor and that you can have a family life. And that you can work in fashion and have a lot of great friends like—Stephen Gan who makes CR with me. I listened when he was talking about me in front of the screen and it was really emotional because he had never said those things to me in real life. And I was like, “Oh my God!”

I do think people in fashion are not like people imagine—not nice or full of ego. I think it is another way of showing people that fashion people are not totally crazy, we are not totally decadent. Maybe people will be a bit disappointed because they are expecting me to be running around the whole time in high heels and high skirts and they see me in a pair of jeans—but this is reality. When you work with baby animals in a farm [as Roitfeld did when she was shooting the first CR cover with Kate Upton] you aren’t going to be wearing high heels.

We have to ask—what’s your diet? You always look so fabulous.
I’m very low key with my body because I don’t diet. I’m like my dad and my son. I drink green tea all day long, and at night I drink vodka. So each night, I have my vodka. I’m not an alcoholic, but I do love vodka. And then I do ballet. French women—we eat everything. In America, you don’t eat this, you don’t eat that. In France we are not like that. We have an easier way of eating. And I would just like to say thank you Daddy. I think it is very genetic.