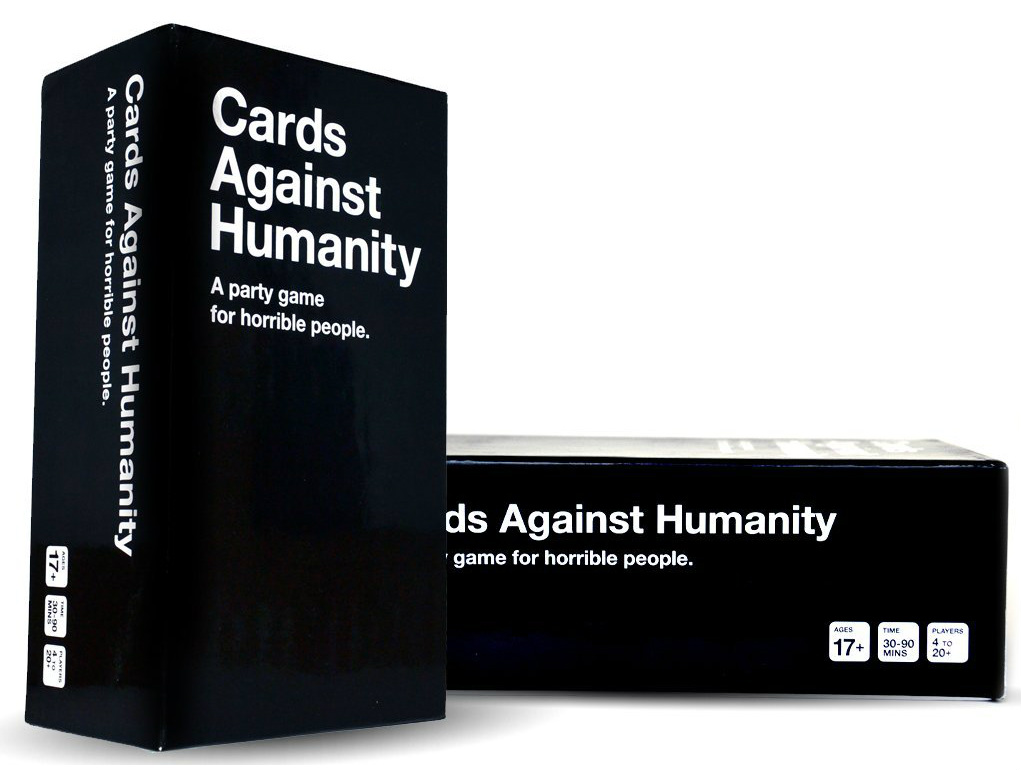 Even if you’re not particularly into parlor games, odds are you’ve heard about Cards Against Humanity. The politically-incorrect pastime seems to have gone—to use web parlance—totally viral, causing us to realize that everyone we know is either bringing it everywhere they go, or bemoaning the fact that they can’t get their hands on a set.

If you’re not familiar, it’s a pretty basic model. Each round, one player reads an innocent-enough question from a Black Card (An example: “This is the way the world ends. Not with a bang but with…”) and everyone playing has to anonymously throw in what they consider to be their funniest White Card (“Nickelback!” “Oprah sobbing into a Lean Cuisine!” “A Super Soaker full of cat pee!”)  From there, the black card owner must decide which card is funniest.

While the game isn’t especially challenging on a cerebral level, it does test your own knowledge of how well you know the friends you’re playing with. You’ll only be successful at Cards Against Humanity if you understand the type of humor your opponents have. Someone with dry wit probably won’t find anything about gas, defecation, or cat pee entertaining, while toilet humor enthusiasts likely won’t choose biting pop culture references or satirical statements as their winning card.

Why it’s gotten so insanely popular is probably due to a mix of millennial word of mouth, the fact that it brought a cool factor to a typically hokey gaming format, and the integral move of not producing unlimited quantities, which has created an unprecedented demand (the game has likely generated at least $12 million in revenue since 2011, according to a profile in the Chicago Sun Times, though the company won’t give sales figures.)

In the interest of keeping you abreast of everything that’s big right now—including games!—here are 5 interesting facts about Cards Against Humanity.

1. It started as a Kickstarter campaign.
In December 2010, Cards Against Humanity’s co-founders—eight “nerdy 20-somethings from [Chicago suburb] Highland Park who have yet to quit their day jobs,” as they’re described in the Sun Times profile, launched a campaign through Kickstarter, the site that lets startups raise money, to fund a professionally printed version of the game, which they concepted in 2008 as a way to keep busy at a party.

2. It’s independently run.
Despite Cards Against Humanity’s buzz reaching a fever pitch, the 8 “nerds” have kept their day jobs and still haven’t sold the company or sought out investors. Nor have they spent a dime on marketing and have no full-time employees.

3. It’s sold out everywhere.
Demand for the $25 game is absolutely staggering, with third-party sellers asking as much as $150 on Amazon.

4. But you can download it for free!
In a modern twist, users can download a free PDF of the game—available under a creative commons license—and take it to a printer like Staples, who will then print it out on card stock. Customers have downloaded the game 1.5 million times since the founders began tracking the number last year, according to the Sun Times.

5. It’s politically incorrectness is probably why copies don’t exist.
You’d think big gaming companies like Hasbro, Parker Brothers, or Mattel would have each had their own versions by now, but there’s nothing like Cards Against Humanity out there (except a few funny parodies.) Why? Probably because—as the Sun Times pointed out—the big players don’t want to go anywhere near phrases like “Oprah sobbing into a Lean Cuisine” or “the primal ball-slapping sex your parents are having right now.”

What do you think: Is Cards Against Humanity awesomely fun, or just an awesomely dumb time-waster? Weight in below! 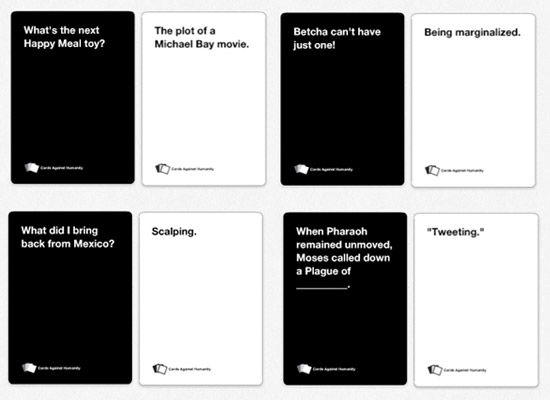