On November 21, Pepsi announced a fun initiative that involves shmoney. Cardi B’s Pepsi “Gift It Forward” commercial is just in time for the holidays, and will make you feel super duper merry. The full commercial video starts with “A Cardi Carol” narrated by Pepsi. The story unfolds in the Bronx circa 2002 where Cardi and her sister are waiting to receive gifts from Santa. He leaves gifts for her sister–but Cardi gets bupkiss because she’s on Santa’s naughty list.

“That’s a silly rule. What’s wrong with being naughty? Being naughty and nice is what makes me Cardi,” Cardi says. She then responds by making a rule/pledge of her own: to give gifts that are “sweeter than honey” to any and everyone.

“I’ll find a way to give everyone money,” she says. The storybook pages flip rapidly to present day where Cardi B is dressed in a blue suit and a white fur coat while holding a cell phone in her left hand and a Pepsi can in her right.

She introduces the holiday campaign by saying “need money to give money.” In Cardi’s Twerkshop, the song rings, “Here comes Cardi B, here comes Cardi B, she’s gonna make it rain…Turning Pepsi into cash to make your holiday bright.” 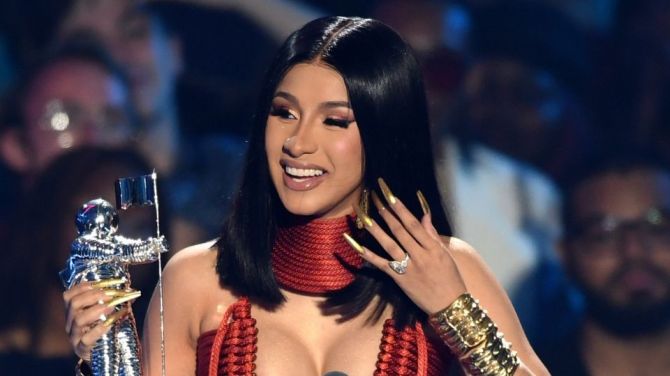 The video is full of wordplay and organically funny moments with Cardi interacting with her elves. Apparently, the campaign involves scanning your Pepsi can, getting a match and opting to give that money forward to whoever you want!

In an Instagram post, Cardi shared the full commercial and in the caption she wrote: “Make sure you give the gift everyone wants this holiday season – CASH! #GiftItForward with @Pepsi YOU ALREADY KNOW …We giving out SHMONEY!”

Get in the giving spirit with Cardi’s new Pepsi commercial.