You might not realize it, but Cardi B and I actually have a few major things in common. For instance, neither of us can legally drive a car and we both grew up in New York City. One thing I seriously wish I had, though? Her daring fashion sense. Cardi B’s GRAMMYs 2021 look just reminded me to take more risks with what I wear, because clearly, they pay off!

In a move that shocked literally no one, Cardi B served one hell of a look at the GRAMMY Awards ceremony in Los Angeles. While I didn’t spot her on the red carpet, the rapper put on one hell of a show alongside Megan Thee Stallion for their first-ever live performance of their notorious hit, “WAP.” Cardi’s look included a metallic bikini complete with Madonna-inspired cones boobs, spiky shoulders and even knee pads. I don’t know if I’ll ever get the chance to copy this look, but I can certainly appreciate it.

Never one to miss out on an opportunity for good glam, Cardi swapped her usually-black locks for a cropped pink pixie cut. And in Cardi World, this is considered an overall tame aesthetic! In case you forgot, she wore an actual clamshell to the GRAMMYs in 2019 and a barely-there sequined gown in 2020. Going all-out is kind of her thing, so of course she had to show a little skin during her performance. 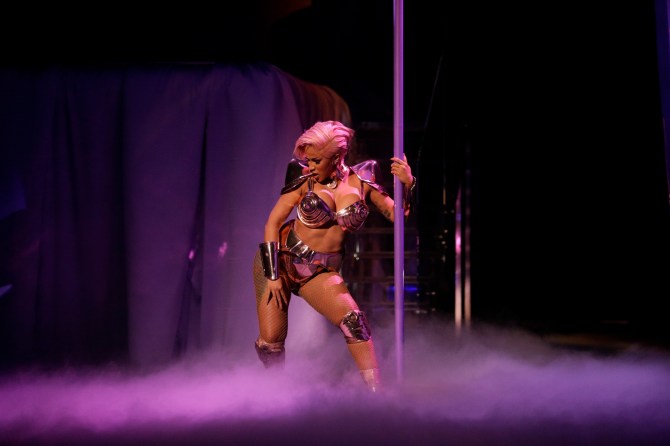 Thank goodness this woman had a chance to dress up tonight, because truly, no one has done quarantine style better than the rapper and mother-of-one. If you thought that motherhood was going to slow Cardi B down, think again—the opposite is true. She’s worn plenty of game-changing looks over the last twelve months, but allow me to highlight a few of my faves. That dress made from her own hair extensions is certainly up there. So is her infamous denim bikini. I could never forget the denim bikini!

Given that those were essentially off-duty looks, I should have known that Cardi was going to step it up and look even hotter for the GRAMMYs—she never misses a beat when it comes to looking fierce. Not that I’m complaining; I love seeing my faves kill it, especially after a year like 2020. Although I am a little salty we didn’t see her walking the red carpet, since she’s usually at the top of my Best Dressed list. Here’s hoping she has a fire afterparty ‘fit to make up for it!