The 61st annual Grammy awards are off to a great start. Alicia Keys is absolutely killing it, but what everyone can’t stop talking about is Cardi B’s Grammys’ 2019 performance. The rapper owned the stage like no one else.

After owning the red carpet in an oyster-inspired get-up, Cardi rocked a cropped-hair look with a tight black body suit for her performance of “Money.” The performance started with Cardi resting on a piano in fabulous fashion before she did a high kick to the side of her head. She even thrusted on top of the piano at one point. There was no doubt that the rapper seemed confident and delivered a fantastic performance (as usual.) Offset certainly thought so—halfway through the performance, the camera turned to Offset, who was seen jamming and sticking his tongue out as Cardi twerked on the Grammys stage. (ICYMI, Offset and Cardi also walked the Grammys red carpet together.) Pretty sure that’s what everyone will be talking about. That, and Cardi B’s killer performance of “Money.”

One Twitter user tweeted exactly what we were all thinking: “Cardi B really knows how to this live performing thing #Grammys

However, one not-so-fun Twitter user didn’t approve of Cardi B’s performance—or of the Grammys at all it seems. Yikes!

“I’m getting brain damage from this noise pollution. I have to turn this off. No human should be subjected to this #Grammys

Well, don’t worry, Cardi, we were all here for it! And so are a lot of people.

“So my wig is official missing

The rapper is nominated for five Grammys tonight, including both Album and Record of the Year. She also received recognition for Best Pop Duo/Group performance, Rap Performance and Rap Album.

Prior to tonight, Cardi B shared that she’s been filled with anxiety about the possibility of winning an award and performing in tonight’s show.

“You can never really be so sure,” Cardi B told The Associated Press while promoting her new Pepsi “Okurrr” commercial. “For some reason, with this whole Grammys coming, my mind has been like anxiety, anxiety,” she added.

But the 26-year-old has nothing to worry about right now—she has stolen the show so far with her performance. It was only her second time taking the stage in front of all her fellow nominated musicians at music’s biggest night. so we can understand why she felt some pressure. In 2018, she absolutely crushed it performing “Finesse” with Bruno Mars at the Grammys. What a duo. 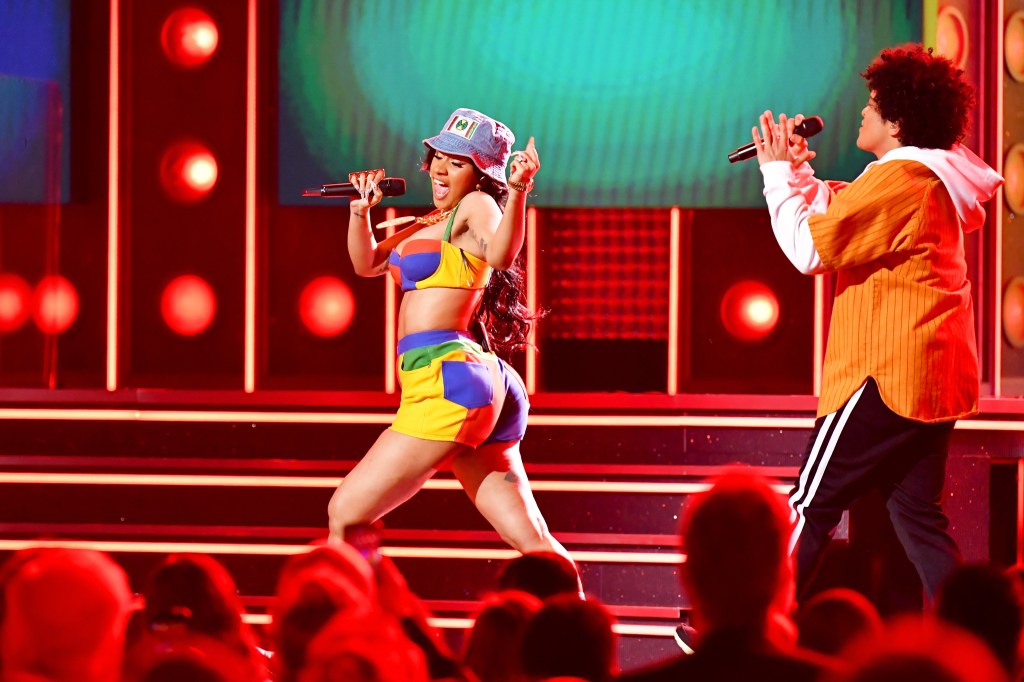 Last year, Cardi B was nominated twice for “Bodak Yellow”—Best Rap Performance and Best Rap Song. Though she didn’t take home  anaward in either category, she stayed positive and driven. “I remember last year, a lot of people were like, ‘You’re going to win,’ but then I didn’t,” she said while promoting the Pepsi commercial. “I was like, I just got to work harder to get one. So it’s like, if I don’t get one, it means I have to triple the work and I’m going to keep on until I get one.”

Despite the loss last year, she definitely took home the award for one of the Best Dressed. Cardi B looked absolutely unreal in her custom creation by designer Mohammed Ashi at the 2018 Grammys.  First the front: 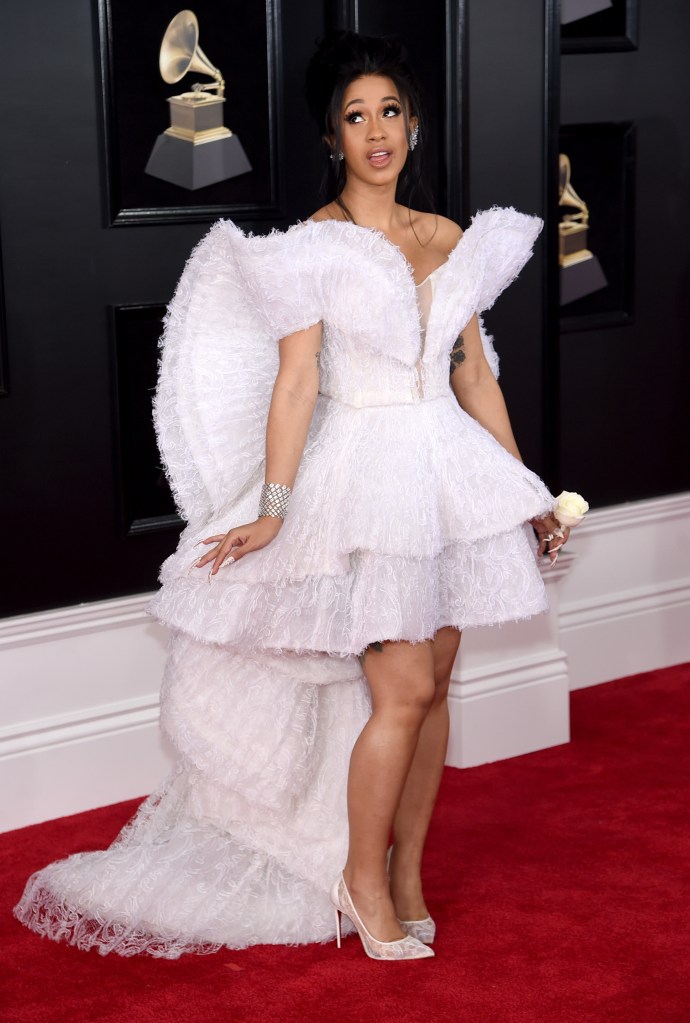 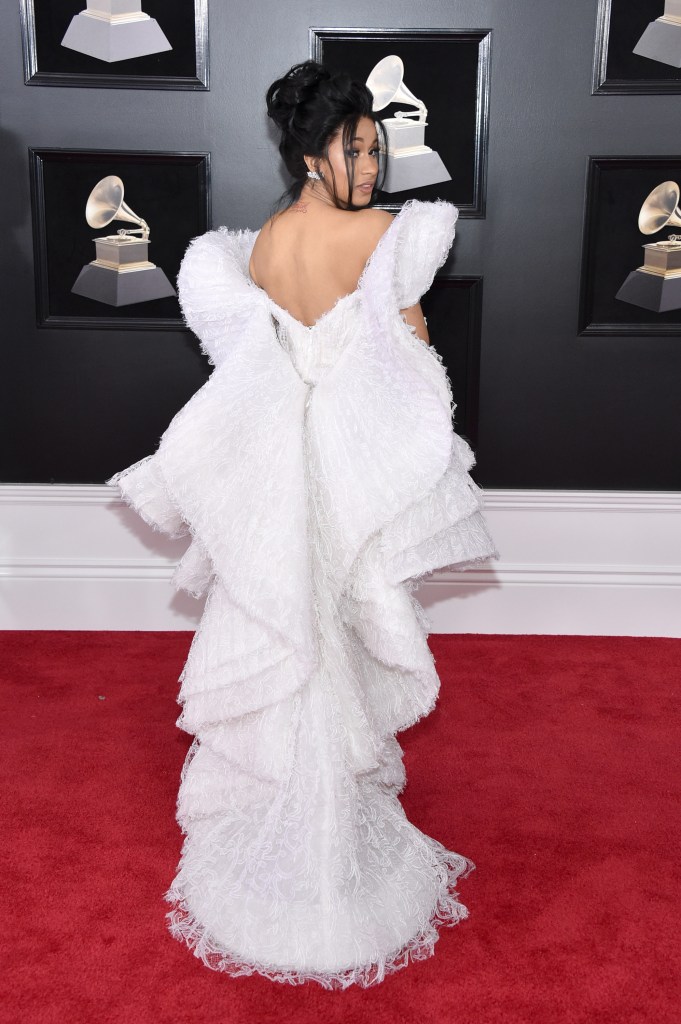 Check out that train! The detail on the gown is outstanding. The designer told InStyle magazine that the dresses Cardi B wore on the Grammy’s red carpet took 150 hours to make! It was about “two to three weeks” of work, he explained. “[We had] six main couture seamstresses working on it.” Wow! Talk about a time commitment. Well, it paid off. She looked amazing at the pre-Grammy Gala and the Grammys. 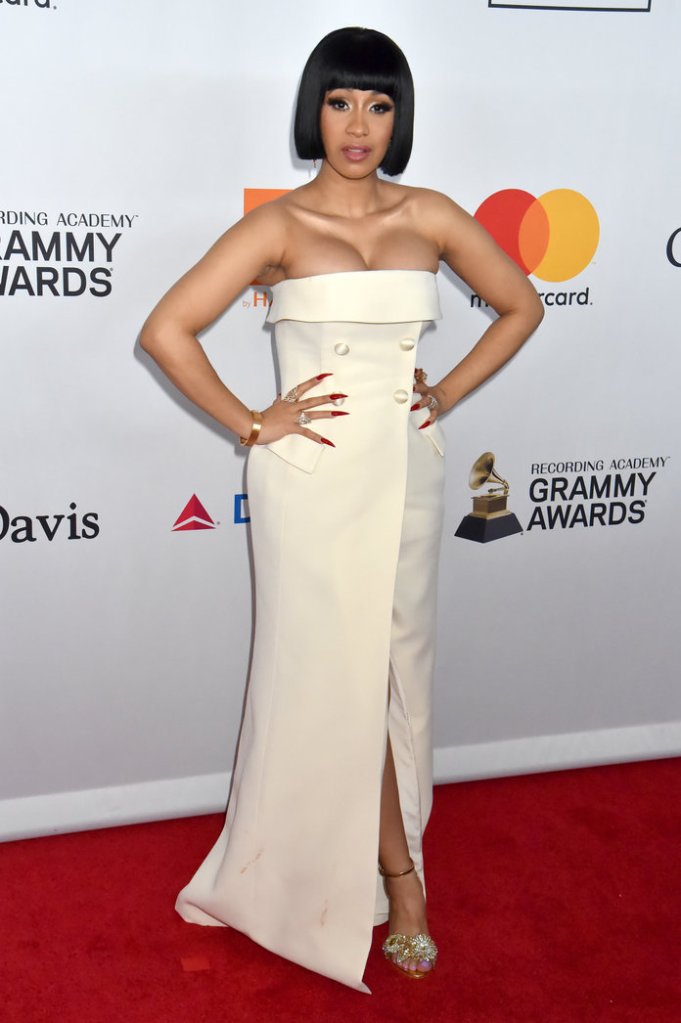 Ashi said his favorite thing about the rapper’s style is that she’s “not afraid to experiment with fashion all whilst staying true to herself. She is a rarity in the music industry concerning her very straightforward and honest personality.”

Very well said, sir! And very correct. Cardi B is nothing if not bold and honest. She’s been quite the Instagram star the past few weeks with some of her videos: One with her pants down complaining about a “pussy wedgie” and another with some sharp criticism of the government shut-down.

She captioned the latter video, “I know a lot of ya do r watch the news so I’m letting ya know shit getting real …..I ain’t going to say nothing much tho I don’t want mofos to off me…..ANYWAYS TWERK VIDEO OUT NOW”

Both led to quite the reaction from the social media world.

Needless to say, Cardi B makes a strong impression wherever she goes. And the same can be said about her performance tonight. Bravo, Cardi!