Cardi B became the first solo woman to win the Grammy for Best Rap Album on Sunday night. But since her win, she has faced some criticism from people who believe she was undeserving of the win. Cardi B deleted her Instagram after this Grammys 2019 drama. After her win, the 26-year-old posted an explicit rant (she’s well known for those), responding to the critics who doubted the validity of her success.

It was a sad moment for the rapper, who was full of joy and excitement when her name was announced on Sunday February 10, at the 61st annual Grammy awards.When she won, she hugged Offset and grabbed him by the hand, pulling him up on stage with her. “Babe. I can’t breathe,” she said when she took the stage. “The nerves are so bad. Maybe I need to start smoking weed.”

After thanking people in the industry, she turned the focus to her young family. “I want to thank my daughter. I’m not just saying thank because she’s my daughter. When I found out I was pregnant, my album was not complete. I had three songs I was for sure having. And you know how I was. We had to have this album done so I could shoot these videos but I’m still not showing. It was very long nights.”

But since coming off the high of the night, Cardi B was hit with the reality of nay-sayers who claimed she didn’t deserve the win. Cardi B posted this video on Instagram, which has since been deleted and reposted by a fan. After removing the video, Cardi deleted her whole Instagram.

In the video, Cardi says, “It’s not my style for people to put other people down to uplift somebody else. That’s not my style, and that’s not what I’m with and I don’t support that.” The rapper was refrering to a dig BET made at Nicki Minaj, which said she was “being dragged by her lacefront” after Cardi B’s Grammy win.

Cardi continued, “However, I’ve been taking a lot of shit today. I’m seeing a lot of bullshit today and I saw a lot of shit last night. And I’m sick of this shit. I worked hard for my motherfucking album. I remember last year when I didn’t won for “Bodak Yellow”, everybody was like, ‘Cardi got snubbed,’ ‘Cardi woulda got snubbed.’ Now this year’s a fucking problem?” the singer asked.

“My album went two-time platinum my n—. And every chart that there was, my album was always top ten. Number one album as well! I fucking worked my ass off—locked myself in the studio for three months my n—’. Then went to sleep in my own bed, sometimes for four days straight. Pregnant! Some songs couldn’t even get on the fucking album because my nose was so fucking stuffy from my pregnancy. N— couldn’t sleep, n— couldn’t do shit.”

Cardi B went on to talk about the reactions people had when they found out she was pregnant. “Why everybody was harassing me like, ‘You not gonna do it,’ ‘we know you’re pregnant,’ ‘your career’s over.’ That shit wasn’t on my fucking mind when I’m working.”

Post-rant, it seems Cardi B has decided to leave Instagram—at least for now. After she deleted the video but before she officially deactivated her account, the “I Like It” rapper shared a simpler reflection on her Instagram about the hard work that went in to making her album, Invasion of Privacy.

“Slept in the studio on leather sofas for three months straight, migraines, in Atlanta, in Miami, away from my family. I have four songs that couldn’t make the album cause my nose was so stuffy, bro. I was huffy puffy,” she began.

“I had @offsetyrn and @brooklyn.johnny reaching out to the world for a verse on top of that I was depress [sic] cause everybody was suspecting I was pregnant and I constantly kept reading Cardi you ‘STUPID,’ ‘YOU RUINED YOUR CAREER,’ ‘WHY WOULD YOU HAVE A BABY AT THE BEGINNING OF YOUR CAREER.'” 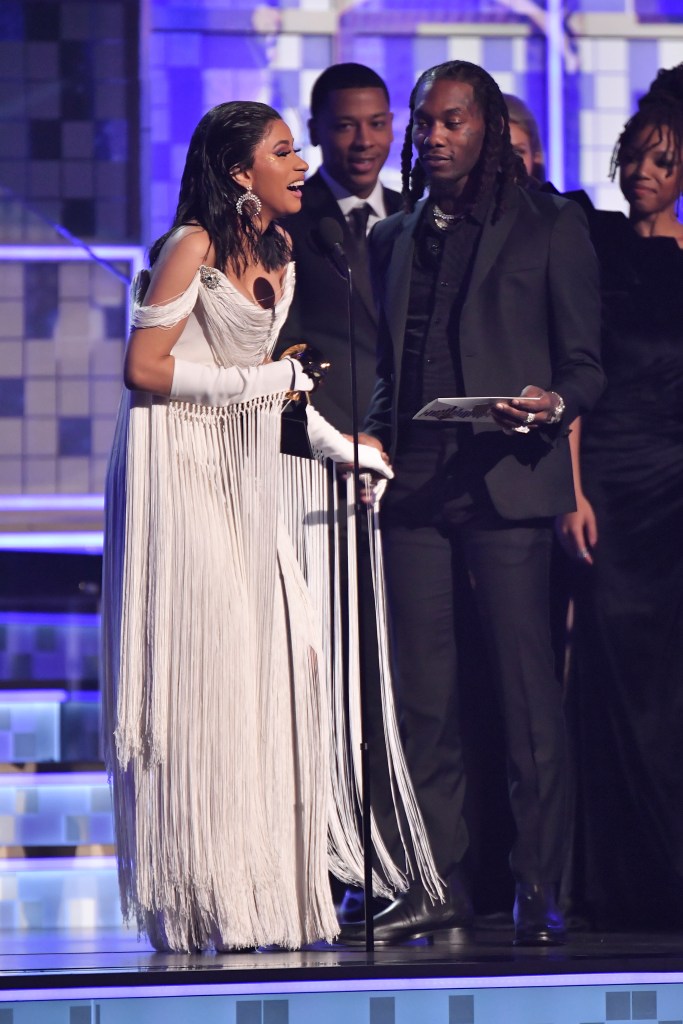 “My album went #1 and spend [sic] 21 weeks straight on billboard top ten! Every song is gold or platinum or higher. I listen to my album and I cry because I know the hell I went thruu doing the album is always a bittersweet memory.”

“THANK YOU EVERYONE THAT SUPPORTED ME AND LISTEN. I’m thankful and grateful and again thank you to all the artist that gave me a feature,” the “Money” rapper added.

Chance the Rapper, 25, who was featured on Cardi B’s album, came to her rescue. He affirmed the validity of her win commenting, “This is overly deserved, the album was front-to-back hits. It would be inconceivable not to honor u last night. So happy for yu, u made history and u brought ur husband onstage who I saw literally making phone calls and trips to make sure niggas did right by u and turned they verses in on time. Look man u need to live in this moment for awhile! Straight up bask in it in YOU derserve it. It’s a felling very few will ever know, but YOU do. God bless see yall soon 100 100.”

Well said, Chance. We agree. Enjoy this win, Cardi. You really do deserve it! Just check out her performance from Sunday night, and you’ll understand.