Cardi B is always one to impress me with unexpected fashion choices, but it’s been a few months since she left me truly wowed. No shade—celebs haven’t been going to many events or parties, so I wasn’t expecting any haute couture moments! That said, she’s back with the look of the century, and we need to talk about Cardi B’s Christian Siriano dress, worn for a recent interview with Footwear News detailing her upcoming collaboration with Reebok. Given that Cardi is receiving the Style Influencer Award at Footwear News’ Achievement Awards on December 8, it’s no surprise she pulled out all the stops with this look.

I have so, so many questions, but before that, you should know that Cardi is dropping a collection with Reebok on Friday, November 13, featuring some hella cute Club C sneakers you’ll most definitely want to cop. For the full tea on the drop, check out the Footwear News interview, but right now I’m here to talk about the accompanying photos. In the majority of the shots, Cardi wows in a stunning Christian Siriano gown and matching hat. On the designer’s Instagram, he calls the gown a “liquid Siriano velvet sculpture,” and from the knees up, I agree—but what about the bottom?

I feel like I’m going crazy. How is no one talking about the fact that the dress appears to turn into hair extensions towards the bottom?! Her gown has a literal weave, and I think I love it! 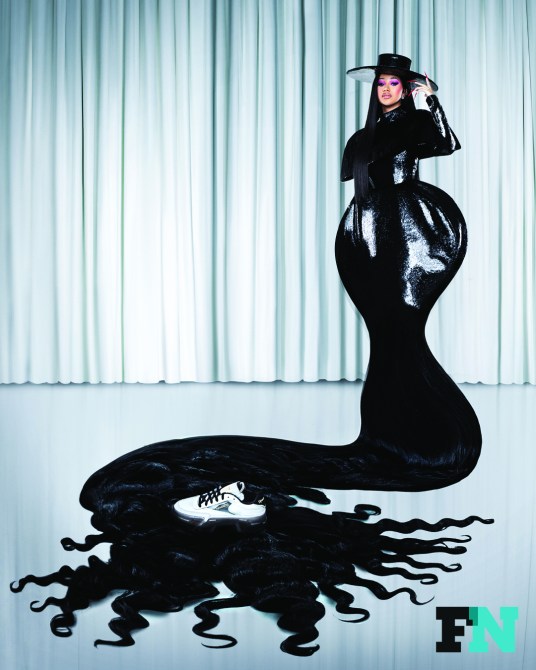 Peep the new Club C Cardi sneakers resting atop a bundle of wefts, which appear to grow from the bottom of Cardi’s dress. It’s a seriously cool visual, but alas, it’s Photoshop magic. How do I know? There’s another shot of the shoes resting atop Cardi’s hat on a pedestal of hair, and I don’t think they cut half the dress off just to get the photo. 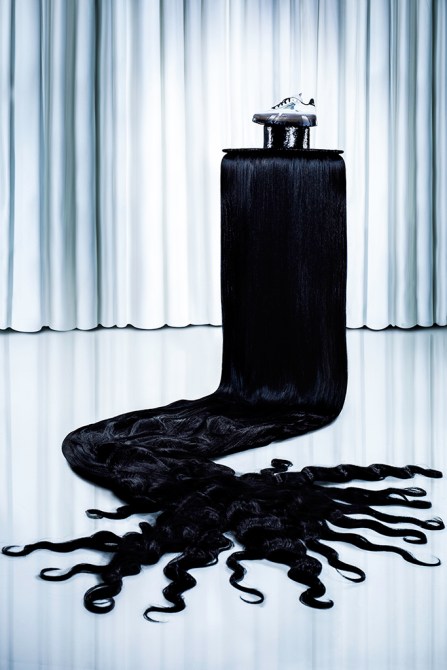 It looks to me like they creative this very cool hair sculpture, shot Cardi in her gorg Siriano gown, and then whipped up an image that combined the two—a little Hannah Montana action, if you will. The best of both worlds! In the interview, it is mentioned that Cardi had to balance atop an apple box for one of the photos, so maybe that had to do with placing the extensions beneath her. I can’t say for sure, but what I can say is that I love the visual, and the photos (and Cardi!) look amazing. 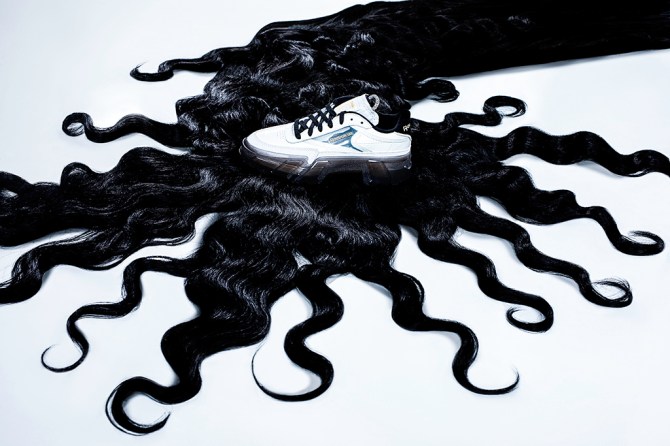 Shout out to Cardi for serving us the slay we’ve been waiting on, and if you’re looking to shop her coming-soon Club C collection, hit up the Reebok site come November 13. Weave sold separately.