Most of us have played Cards Against Humanity, but what about other card games for adults, like Taco Cat Goat Cheese Pizza or Incohearent?

While a night out is fun, there are also times when we crave a night in with friends, snacks, drinks and a good card game. But when all the card games you’ve become bored of Uno and Go Fish, it may be hard to know what fresh, fun card games there are to play for adult hangouts. That’s where we come in. Ahead, we’ve rounded up the funnest and most outrageous adult card games to play with your friends, from NSFW versions of Taboo and Pictionary to competitive challenges where you have to avoid dying from exploding cats.

Whether your friends dirty-minded and have “that’s what she said jokes” on the brain or your inner circle is filled with master strategizers who imagine what it would be like to be a Disney villain, this list of adult card games is for you. Who said staying in couldn’t be as fun as going out? From simple and easy card games that take less than a minute to learn to longer matches that will have your friends thrilled with excitement, these card games for adults are the best way to enjoy a night in with no supervision. 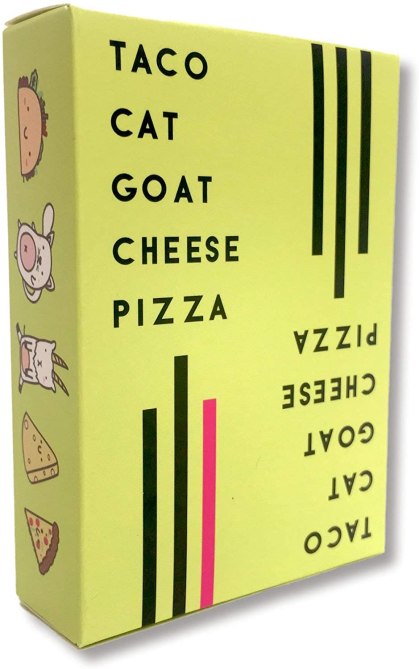 The name of Taco Cat Goat Cheese Pizza should be reason enough to play it. In this simple and easy game, which takes less than a minute to learn, players start with a face down stack of cards that either have a taco, cat, goat, cheese or pizza on it. To play, each player reveals the the top card of their stack and places it in the middle while saying “taco,” “cat,” “goat,” “cheese” and “pizza” in order. (The first player says “taco” and reveals a card; the second player says “cat” and reveals a card and so on and so forth.) If the card a player says matches the card they reveal, each player has to slap the stack. The last player to slap the stack must take the pile. The player who gets rid of their cards the first wins. If Taco Cat Goat Cheese Pizza sounds like it can get rowdy and competitive, that’s because it can. 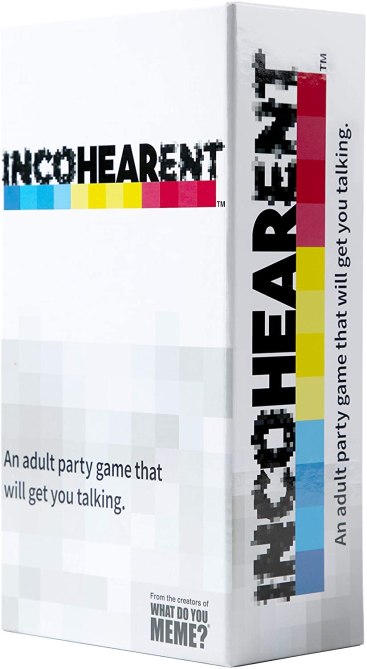 In Incohearant, players must guess a phrase from an incoherent spelling. (Example: “hike ant eve hen” = “I can’t even.”) To play, a rotating judge flips a timer and holds up a card so that only they can see the answer. On the back of the card is the answer while the front has the incoherent phrase. The other players then guess what the phrase is from the incoherent spelling. The first player to guess the phrase wins the card. At the end, the player who’s won the most cards wins. Yeah skew ween! (Or shall we say “yass queen!”) 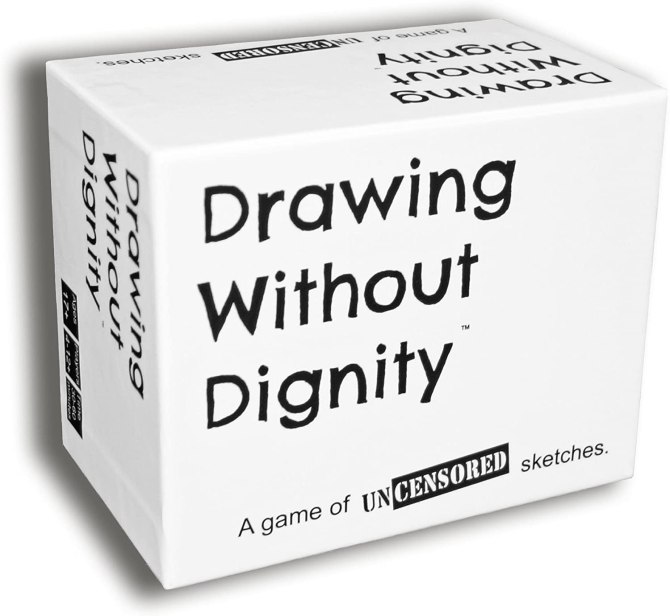 Image: Courtesy of Drawing Without Dignity.

Drawing Without Dignity is the dirty Pictionary we’ve all wanted to play. To play, a player rolls a dice and draws a card. On the card are five NSFW topics like “pissing in the wind” and “constipated” that the player must draw for their team to guess. Once the timer runs out, the player shows their dirty drawing to their team, and if their team guesses the image in time, they win a point. However, this isn’t just uncensored Pictionary. Other players can also “cockblock” their opponents with special cards and steal their points. 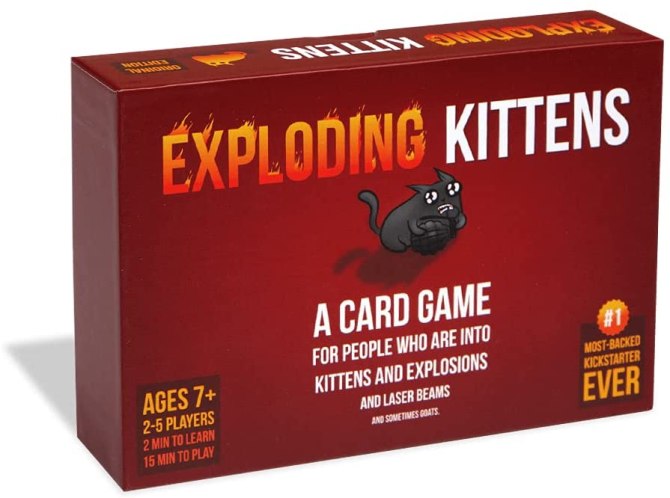 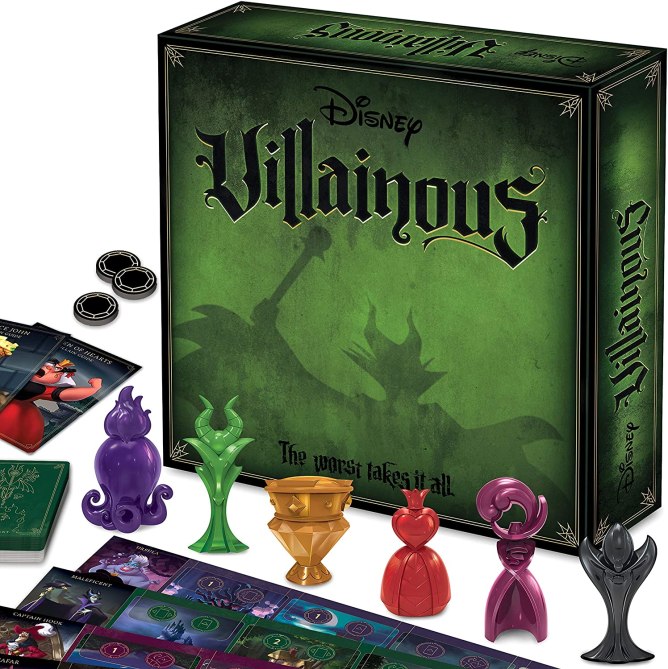 Disney Villainous is an adult game for Disney fans. To start, each player chooses one of six iconic Disney villains, including Ursula from The Little Mermaid, Captain Hook from Peter Pan, and Jafar from Aladdin. Each villain has their own move piece, board and deck of cards. Each villain also has their own objective, which has to do with their goal from their respective movie. (For example, Captain Hook must vanquish Peter Pan at the Jolly Rodger.) Each turn, players use cards from their deck and spend Power (a.k.a. money) to move towards their objective. The first play to reach their villain’s objective wins. However, other players can slow down their opponents with Fate cards, a.k.a. cards with heroes like Ariel, Aladdin and Alice that can hinder their opponents and give them a chance to win. 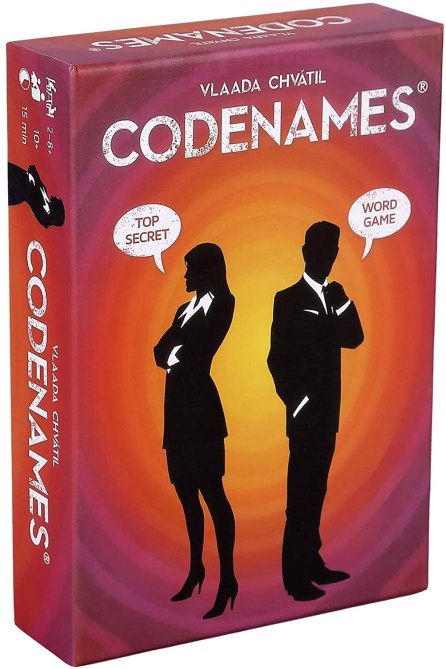 Code Names is the perfect game to play with teams of two or more. To start, a 5×5 grid of cards with various words, like giant, boot and calf, is placed in between you and your team member. One member from each team then draws a map that only they and not their team member can see. On the map is the location of where agent cards, innocent bystander cards and the assassin cards are. The player with the map must get their team member to guess the cards on the grid that correspond to the agent cards with just one word. (For example, if you want your team member to guess “swim” and “boat” on the map, you could say “water.”) The team member can guess as many cards on the map as they want, but if they reveal an innocent bystander, their turn ends. If the team member chooses the assassin, they immediately lose and the other team wins. If no one reveals the assassin, the team who reveals all the agents first wins. 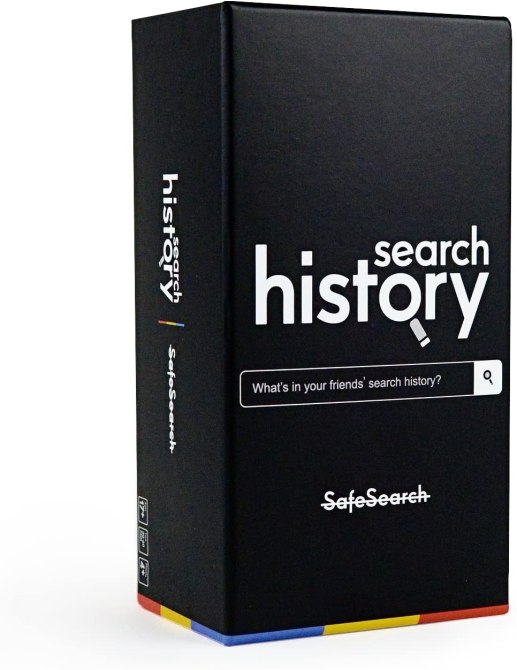 In Search History, an alternating leader draws a card from a deck. On the card are three prompts and what autofills at the end in a search browser. (For example, “Is it okay if I cut” autofills with “a dog’s whiskers” at the end.) The leader then read the first part of the prompt of their choice, and the other players must write their guess for what autofills at the end. The players who write the correct answer win four points. If no one guesses the correct answer, the leader writes the correct answer on a piece of paper and shuffles it with the other guesses. The leader then reads all the answers, and the players have to guess which of the answers is the correct one to earn a point. 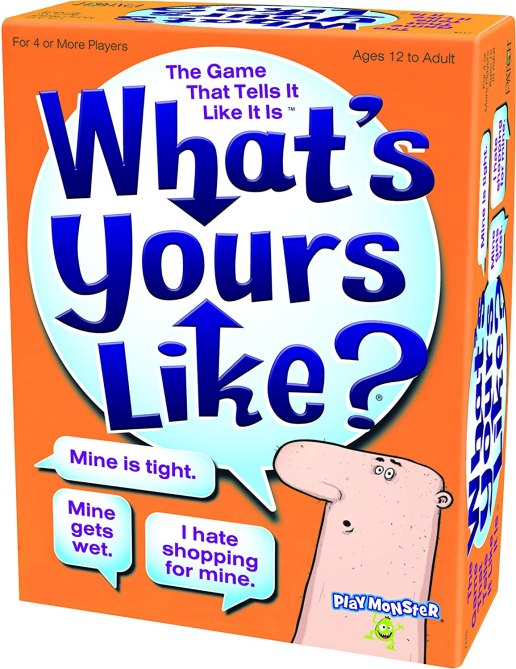 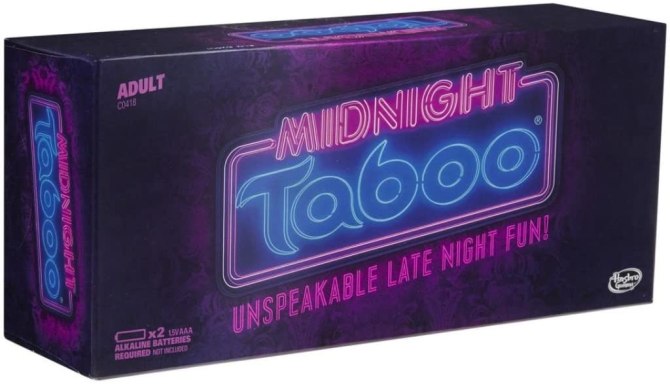 You’ve played taboo, but have you played Midnight Taboo? The game is played like normal taboo: There’s a card with forbidden words that a player must get their teammate to guess before time runs out. However, the cards in Midnight Taboo aren’t just any words. They’re more adult phrases like “body shot,” “knickers,” etc. 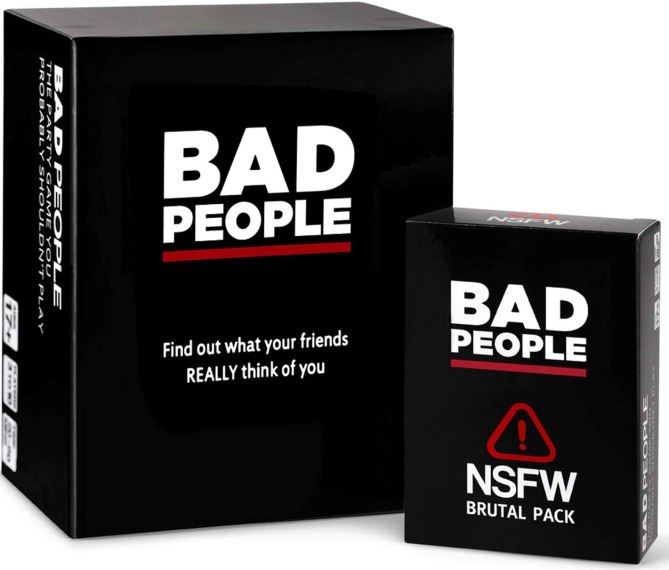 Bad People is the game to find out what your friends really think about you. The game starts with a card revealed. On the card is a honest-but-brutal question about the friend group you’re playing with. Some questions include: “Who gets paid too much for what they do?”, “Who’s mostly likely to burn down their home for insurance money?” and “Who’s the last person I’d want to be trapped in an elevator with?” The players then cast their votes and reveal which one of their friends fits the description the most.

That’s What She Said 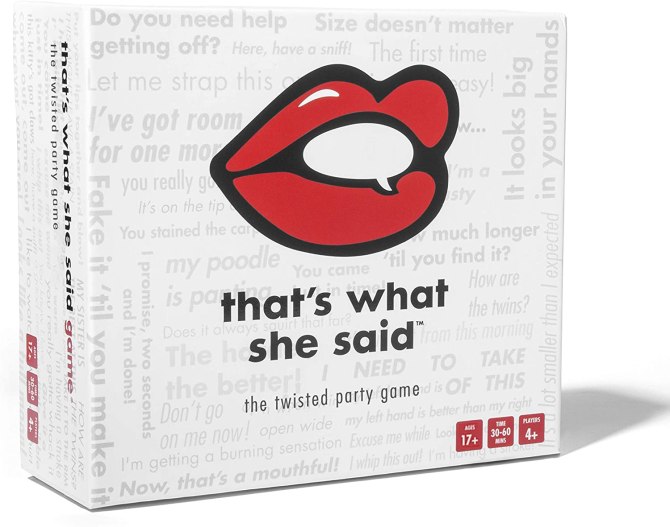 Image: Courtesy of That’s What She Said.

That’s What She Said is for twisted minds and twisted minds only. The game starts with each player picking five white cards. A rotating judge then draws a red card and reads it aloud to the group. On the card are prompts like “On our wedding night, my wife said to me” and “it’s a weird shape but I like it.” The players must then choose the card from their hand that best fits the prompt, and the player whose card the judge decides is the kinkiest wins that round.

What Do You Meme? 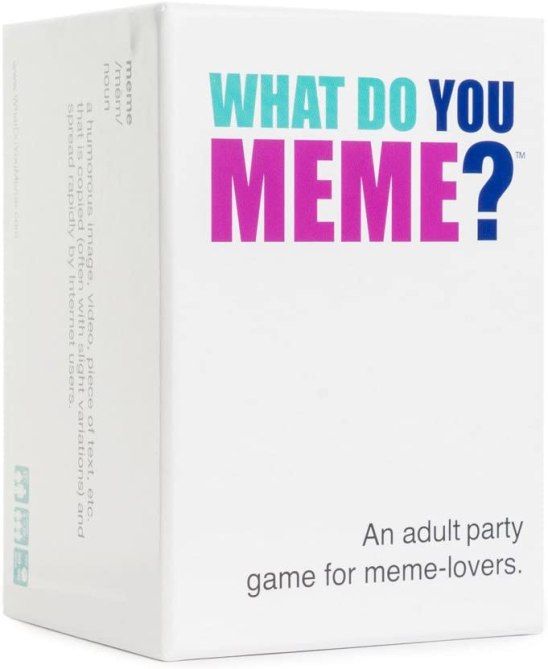 If you have an expert meme maker in your friend group, What Do You Meme? is the game for them. The game is played Cards Against Humanity-style, where players draw a hand of description cards like “When the 19-year-old piercing your ears at Claire’s has Cheetos dust on her fingers.” A rotating judge then reveals a meme photo and the players must place the description cards that best fit the scenario. The card that’s deemed the funniest by the judge wins the round. 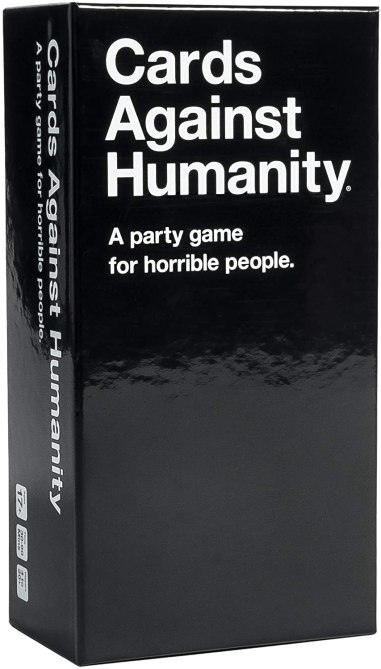 Image: Courtesy of Cards Against Humanity.

Cards Against Humanity is the OG adult card game. But if you haven’t played it, think of it like NSFW Apples to Apples. In the game, there are black cards and there are white cards. The black cards have prompts on them, such as “During sex, I like to think about…” and “Dude not do in that bathroom. There’s…” Each player has a hand of white cards with phrases that finish the prompts. Those can be phrases like “pulling out” or “your weird brother.” Players must choose the card that best fits the prompt, and a rotating judge chooses which answer is the best. The player with the answer chosen wins that round.