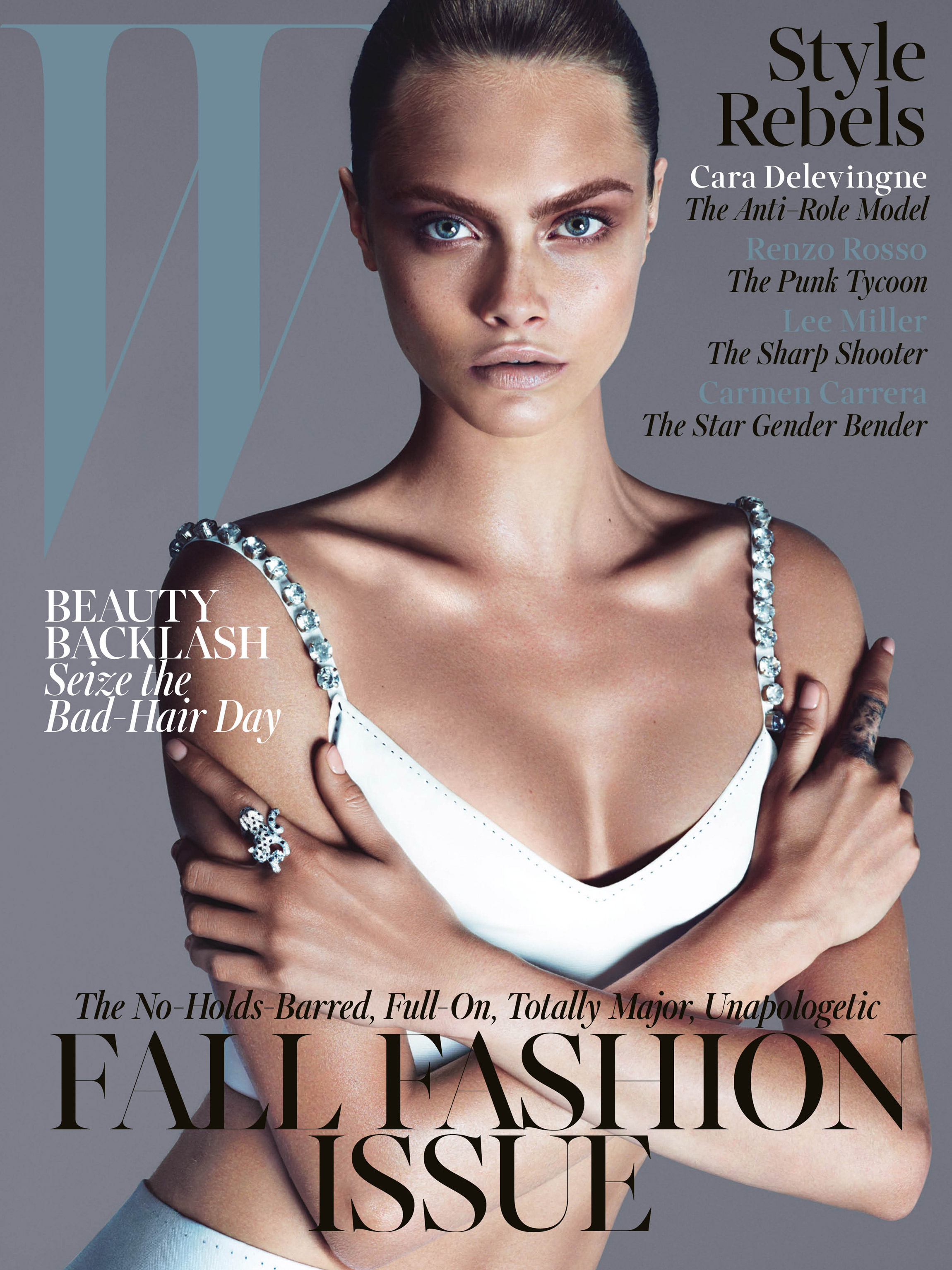 All the September issues are rolling out, and so far one of our favorites has to be the W cover, which features it-Brit Cara Delevingne showing off her sexy pout in a racy crop top ensemble. The 21-year-old beauty (it’s her birthday today!) opens up to the glossy about everything from her post-modeling ambitions to her embarrassing skin condition, and it may seem impossible, but we love her even more after reading her candid quotes.

Below, we’ve rounded up highlights of the interview. Take a look and let us know which you thought was the most revealing.

On her Psoriasis and Kate Moss (yes, they’re related):
“It only happened during Fashion Week!” she told the interviewer. “Which is, of course, the worst time of the year for me to be covered in scabs. Psoriasis is an autoimmune disease, and I’m sensitive. Kate [Moss] saw me before the Louis Vuitton show at 3 a.m., when I was being painted by people to cover the scab. She said, ‘This is horrible! Why is this happening? I need to help you.’ She got me a doctor that afternoon; Kate gives really good advice.”

On how she got successful—even without huge breasts.
Delevingne has a very different look than many models out there, and what’s made her so famous once made her super insecure. She told W, “In the beginning, I was thinking, How do I set myself apart from the other girls? So many girls were taller, skinnier, and prettier. And I’m not a girly girl at all—I didn’t get boobs until I was around 18! As a teenager, I kept thinking, I’m so short, and I have no boobs—what do I do? Maybe that’s why I’ve been noticed. I treat the camera like a person—I gaze into it. Photos are a flat thing, and you need to put life into them.” We bet anyone would trade a large bust for her photogenic tendencies!

On her dreams of being Miley Cyrus:
Since she comes from a very prominent English family that had involvement with fashion, her first time posing in front of the lens was when she was 10-years-old, and appeared in Italian Vogue shot by legendary photog Bruce Weber. But she was not into it—after all, her older sister Poppy was quickly gaining prominence in the modeling world.

“Poppy was a model, and I never liked to do the same things my sisters did. After the Bruce Weber shoot, I didn’t think about it. I wanted to be either a musician or an actress. I wanted to be a Disney Channel star! I wanted to be Hannah Montana. They said no!” Damn! We think she’s about the only person who could have given Miley a run for her money.

On her bad girl reputation:
After narrowly avoiding a full-blown cocaine scandal, more and more people have been following her every move, especially when she’s partying with stars like Rihanna or Rita Ora—two of her closest friends. Alas, she claims that there’s nothing for people to get up in arms about. “Everyone worries about me. It’s hard for my family, and I know I have to be careful. People have to realize that I can take care of myself. I’ve done a great job so far.”

On advice from Rihanna:
Both RiRi and Cara are serious workaholics who also love to party hard, so it’s no surprise that they’re super close—and that Rihanna can give her advice. “I was just on holiday for three days in Greece with my sister, and I thought that would make me happy and relaxed. But when I stop everything, it’s really bad. I go crazy. In Greece, it was a lot of couples, and I felt alone, which made me sad. I called Rihanna. She said ‘It’s easy to drown yourself in work. That’s a form of escapism. So, if you’re alone and you want to cry, cry.’  And I did. But by then, it was time to leave and get back to my life.”

To see more from Cara Delevingne’s interview, head to W!

MORE ON STYLECASTER:
#ThrowbackThursday: See An Adorable 9-Year-Old Cara Delevingne
The Most Scandalous Models From Cara Delevingne to Kate Moss
The Busiest Girl At Fashion Week: Tracking Model Cara Delevingne Through Her Biggest Season Yet