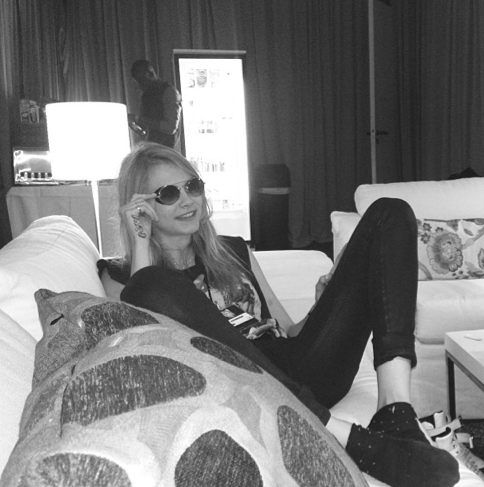 There’s no pair of celebrity BFFs that seem quite as fun as Cara Delevingne and Rihanna. The model and singer clearly have a lot in common, from their equal love of hard partying to now sharing the same tattoo artist. It’s even been reported that 20-year-old Delevingne will be shacking up at Rihanna’s mega-mansion in Los Angeles this summer when she’s overseas on the Diamonds World Tour. But for now, it seems like Britain’s catwalk queen of the moment has officially joined the Navy—the Rihanna Navy that is.

On Saturday, RiRi took to Instagram to reveal that Delevingne was hanging backstage before her show in Barcelona, Spain. Naturally, she looked casual and impossibly chic in a sleeveless T-shirt, jeans, and John Lennon-inspired sunglasses. The behavior backstage at 25-year-old Rihanna’s concerts has become the stuff of legends, with members of her crew (famously known as the Rihanna “Navy”) regularly posting the outrageous antics via social media.

Clearly, Delevingne fit right in—and after blasting her followers with a view from her front row seat, she joined RiRi on the road. Just last night, she was present at another show in Montpellier in the South of France, where she spoke very highly of Rihanna’s derrière. She proceeded to wind down by watching “Hardcore Pawn” in her hotel room. Perhaps she needed a night off from the debauchery, but we’re hoping to see more of the new face of Saint Laurent on the road with her gal pal. Plus, can you honestly think of any two people whose closets you’d rather raid than these two?

MORE ON STYLECASTER:
Cara Delevingne Gets Lion Tattoo On Her Finger From Rihanna’s Tattoo Artist
Model Houseguest: Cara Delevingne To Spend The Summer at Rihanna’s Mansion
Instagram Insanity: 15 of Rihanna’s Most Provocative Pictures