June is LGBTQ+ Pride month and Variety rolled out multiple covers with varying celebrities and their unique coming out journeys. We’ve got SNL’s Bowen Yang, Da Brat, Indya Moore and Cara Delevingne, all with powerful stories of finding their true selves. We learned something about everyone, including that Delevingne identifies as pansexual. Back in 2018, the model/actress revealed that she was sexually fluid but these days, she’s not afraid of the pansexual label.

“I always will remain, I think, pansexual,” she says. “However one defines themselves, whether it’s ‘they’ or ‘he’ or ‘she,’ I fall in love with the person—and that’s that. I’m attracted to the person.” Delevingne is speaking about being attracted to all genders, which is a bit different from bisexuality, which implies just men and women.

Although Delevingne is one of the most famous queer people in Hollywood. Just look at her much-written about  relationship with Ashley Benson. But it wasn’t always so easy or her. Harvey Weinstein, the movie mogul who is serving a 23-year prison sentence for rape and sexual assault, called her out of the blue and gave her some unsolicited advice. 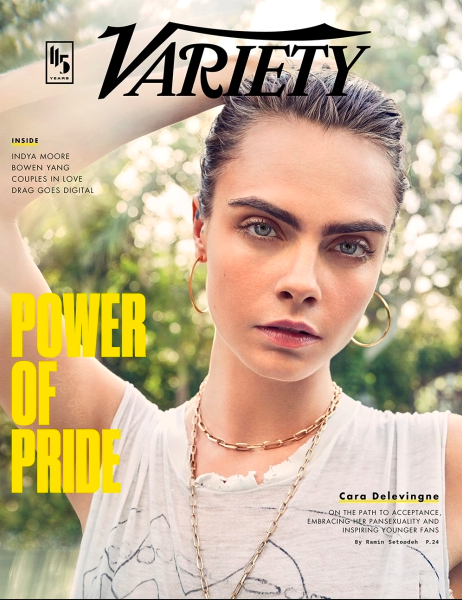 “Harvey was one of the people that told me I couldn’t be with a woman and also be an actress,” she told Variety. “I had to have a beard.” You might remember back In 2017 when Delevingne shared a story to Instagram about an encounter with Weinstein. She says Weinstein tried to kiss her in a hotel room and offered her a role in the movie “Tulip Fever.”

“To me, the idea of having a beard was—I’d heard it happen before—I just felt so disheartened by it,” says Delevingne. “Do you have a conversation with a dude, and they’re like, ‘I’m going to pretend to be with you but not really love you’? I kind of think when I was pushed more that way, I realized how much more I needed to go the other way.”

For Pride this year, Delevingne launched a clothing line with Puma (she’s an ambassador for the brand) with 20 percent of the proceeds—a maximum donation of $250,000—from the sales benefiting LGBTQ+ organizations. She even arranged a $1 million partnership between Puma and The Trevor Project. The line includes colorful cropped tees ($28 at Puma), rainbow fanny packs ($20 at Puma) and hoodies ($45 at Puma).

Being a part of this project and being on the cover of a Pride issue is something Delevingne would never have believed as a teen. She says: “I wish I could have told my 16-year-old self that, because honestly, I never would have believed it.”