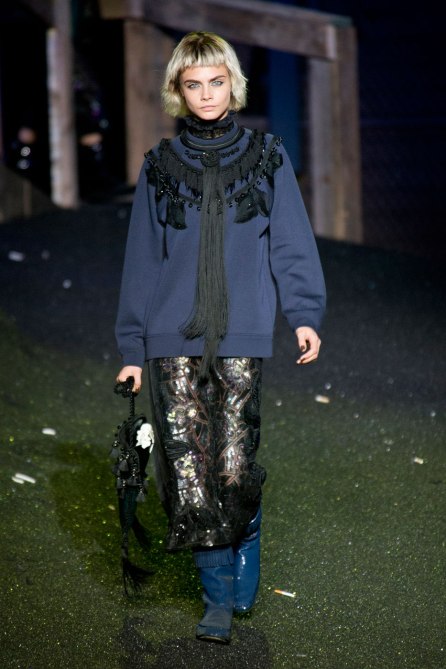 During the Fall 2013 season of New York Fashion Week, there was no question that Cara Delevingne was the model VIP. The 21-year-old Brit walked in over 15 shows in New York alone, and we were totally mystified as to how she seemingly managed to be in completely opposite ends of Manhattan at all times.

Oddly though, during NYFW’s Spring 2014 season (which wrapped yesterday) she was totally MIA, save for a killer appearance (and a choppy bob haircut) at the Marc Jacobs show. While we’re sure she had a multitude of reasons for abstaining from the craziness of the week, but we couldn’t help but take 5 guesses why Delevingne put herself on the bench.

1. She’s too good for it, and over New York’s second-tier designers.
Obviously, New York Fashion Week brings out some of the best collections, but Delevingne is a favorite of A-list designers like Karl Lagerfeld, so perhaps she’d rather walk the more prestigious international shows.

2. She’d rather party with Rihanna.
Smack dab in the middle of New York Fashion Week, Delevingne was in London raging with her gal pal Rihanna who was celebrating the launch of her collection with River Island. Delevingne loves her celebrity pals, so we wouldn’t be shocked if catching up with them took priority.

3. She hates fashion week—plain and simple.
Delevingne recently told Industrie that she thinks fashion week is “horrible.” “I mean it isn’t horrible really, it’s amazing. But having to work that much every day is,” she added. “What I find hard is having to deal with all the people and all the crap … It’s when the press and fans are following me most and it’s when I work the hardest, so it’s kind of like, f–k.”

4. She’s over modeling.
Given her desire to be a singer and actress and her upcoming role in British comedy “Kids In Love,” now would be the perfect time for her to separate herself from her catwalk queen image.

5. She wanted to make a statement and only walk in the Marc Jacobs show.
While casting for the Fall 2012 show, Jacobs cut Delevingne from the roster, stating that she was a “dwarf.” Since then, she’s been a fixture on both the Jacobs and Louis Vuitton runways. Even if she transitions away from modeling, maybe this will be the gig she keeps.

What do you think—why was Cara Delevingne absent when so many of her fellow It-models and friends like Karlie Kloss and Joan Smalls were present?