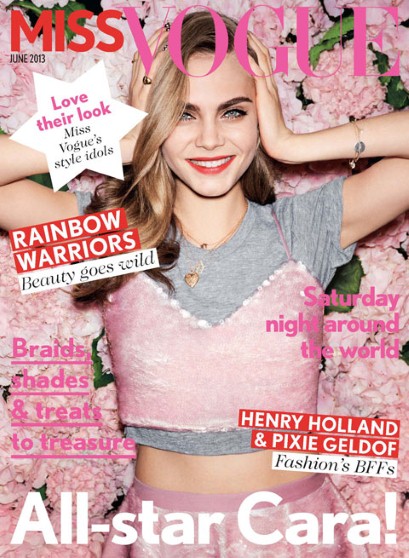 Back in January, British Vogue spilled the news via Twitter that the magazine will be launching Miss Vogue, a teen offshoot this spring: “Working on Miss Vogue this afternoon—yes you heard correctly @BritishVogue are launching a teen edition in May #MISSVOGUE exciting times!” And today, it seems the inaugural issue has landed and features none other than It model Cara Delevingne on the cover.

“We hope you enjoy it as much as we have enjoyed working on it,” Vogue UK’s editor in chief Alexandra Shulman wrote in the issue’s editor’s letter, reported the Telegraph. “Vogue magazine appeals to all ages but I wanted to produce an edition targeted at younger readers, created with your lifestyles in mind. As with the mother magazine, the fashion is meant to inspire even if you’re a bit short on cash.”

Shulman also touts Delevingne as someone with a “maverick sense of style and fun,” which is entirely true, making the 20-year-old an excellent choice for the cover.

It’s not terribly shocking that, these days, fashion is catering to an increasing number of teens. Between the launch of American Teen Vogue in 2003 (which frequently features runway reports and designer shopping picks), under-18 starlets like Chloe Moretz (15 years old) and Elle Fanning (14 years old) walking red carpets in labels like Prada and Jason Wu, and the slew of young actresses being tapped to front high-fashion campaigns (Hailee Steinfeld became the face of Miu Miu at 14, Blake Lively for Chanel, Jennifer Lawrence for Dior), it’s evident that fashion brands and editors understand that teenage girls aren’t to be written off.

It’s also clear that thanks to shows like “Gossip Girl,” and Kardashian half-sisters Kendall and Kylie Jenner posting pics of their new Céline bags to Instagram, the world of teen-friendly entertainment and high-fashion is closely intertwined, so it make sense that there’s such a strong awareness. Which means it also makes sense that more bona fide fashion magazines for teenagers are emerging.

According to the Telegraph, the first issue of Miss Vogue was put together by members of the existing Vogue team, but it’s not yet known whether further issues will be produced.

More: Proof That Young Girls Are Fashion’s New It Group