Cara Delevingne made headlines when she announced her support of the #NoChella movement, an anti-Coachella boycott that formed after The Washington Post reported in 2016 that Phillip Anschutz, the music festival’s owner, had donated to anti-LGBT and pro-gun organizations. Given her public feelings on Coachella, the 25-year-old model confused fans over the weekend when she praised Beyoncé‘s performance, causing hundreds of fans to flood her Instagram with comments calling her a “hypocrite.”

On Saturday night, like the rest of the universe, Delevingne took to Instagram to fangirl over Bey’s surprise performance with her former Destiny’s Child bandmates, Michelle Williams and Kelly Rowland, at Coachella. “I am speechless. That performance made me burst into tears and sent shivers down my spine. Especially the Destiny’s child reunion. ICONIC is an understatement. Thank you for inspiring so many and for lifting each other up. #GirlPower,” Delevingne captioned a picture of the women saluting to the Coachella crowd.

The Instagram immediately sparked backlash from critics who called Delevingne a “hypocrite” for boycotting Coachella yet still watching the festival’s performances. Several commenters called her “fake,” while others accused Delevingne’s boycott of being a “PR stunt.” A few comments included:

“So its ok to h8 Coachella but praise an artist who goes to the show? So many double standards in media today.”

“boooooo no you’re supporting an artist who accepted money from the pig that you shamed!”

“Lol you are fake and full of shit! You literally posted #NOCHELLA.”

“U don’t like the festival but the people who perform there. Are u stupid?”

Catching wind of the criticism, Delevingne swiftly took to her Instagram stories to explain how she, despite her feelings on Coachella’s reported anti-LGBT and pro-gun owner, she can still support Beyoncé as an artist. The “Paper Towns” star confirmed that, even though she will never attend the music festival again, she can still be a fan of Bey’s music.

“Some people are commenting on the fact that I posted about my anger towards the owner of Coachella and then about Beyonce. My hashtag was #Nochella,” she wrote. “I still refuse to go to a festival that is owned by someone who is anti LGBT and pro gun. I am allowed to shame that man and the festival and show my appreciation of an artist at the same time. Just because I love Beyonce doesn’t mean I now love Coachella. I still wouldn’t go. And I will let nothing get in the way of me showing my love or hate for something. Don’t let anyone come between you and your truth.” 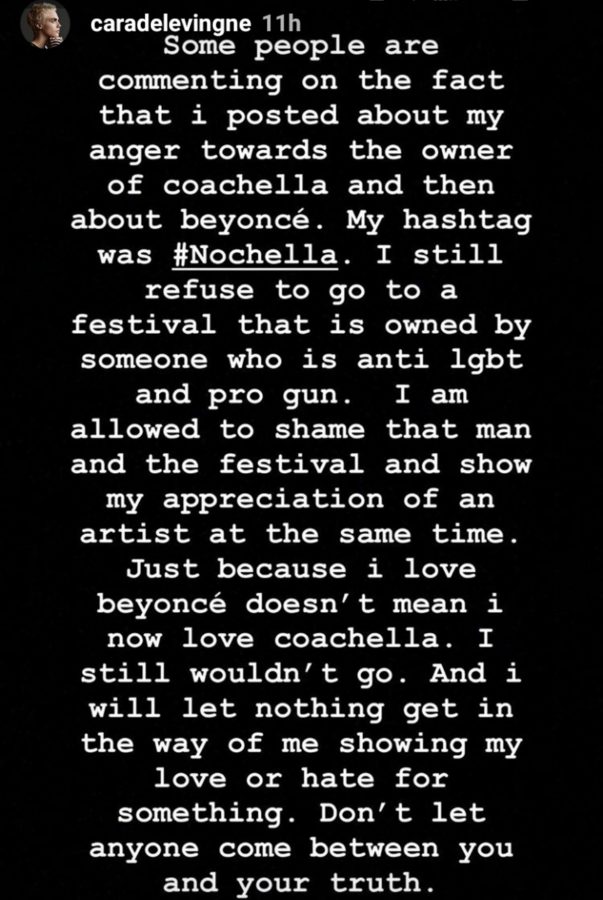 There has been a lot of controversy over call-out culture and how little it actually has to do with keeping someone accountable. Delevingne doesn’t have to explain herself to anyone, but we’re glad that she detailed her reasoning behind watching Bey despite not supporting the beliefs of Coachella’s owner—a complex that likely many attendees have.