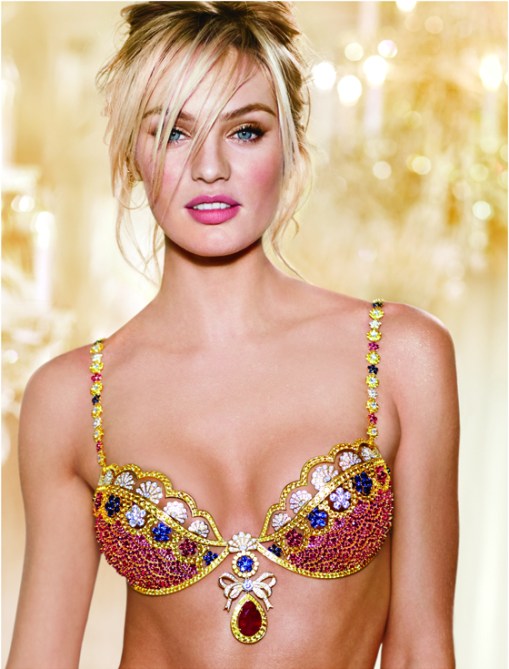 Jeweler Mouawad designed this year’s bra dubbed the “Royal Fantasy Bra” which was created using 4,200 precious stones including rubies, diamonds, yellow sapphires, and the pièce de résistance, a 52 karat pear shaped ruby hanging down from the center. Hey, no one ever said this bra was supposed to be practical.

Model Candice Swanepoel will wear the bra during the brand’s runway show in November, and in its catalogue, further cementing her status as a bona fide supermodel. She told People: “They had to make a mold of my body to be able to make [the bra], I was really excited…I tried to imagine after they’d done the mold, how would they make it, how it would look. My imagination didn’t do it justice.”

It is Swanepoel’s first time wearing the bra, which is always presented as the final look at the runway show, but she is certainly in good company. Claudia Schiffer was the first, sporting the inaugural “Million Dollar Miracle Bra” in 1996, followed by Tyra Banks, Gisele Bündchen, Heidi Klum, Miranda Kerr, and Adriana Lima, among others.

Last year, Alessandra Ambrosio did the honors in a floral-themed bra covered in blooms. That bra was worth $2.5 million, a $7.5 million price difference with this year’s bra. Still, this year’s bra isn’t the most expensive in the brand’s history—that honor goes to the 2000 Fantasy Bra which cost $15 million to hand make.

Not surprisingly, given its price tag, the bra literally has to be handled with kids’ gloves. Swanepoel shared: “I’ve never worn anything this pricey, and we have to put gloves on when we put it on. It’s kind of a big ordeal. The bra comes with two bodyguards and we have to handle it with a lot of care!”