Candice Huffine didn’t have a plan B. From the day she was born, she wanted to be a model. What she didn’t know was how to get there. Raised in a small town in Maryland outside of Washington D.C., Huffine did cheerleading and pageants as a teen, thinking that one day someone was going to discover her. “I was literally waiting for someone to say, ‘Now, tomorrow, we’re going to take your photo for a magazine,’” Huffine tells StyleCaster. “I really wanted to be in the Sears catalog. That was a big goal for me.”

When Huffine was 15, an audience member at a pageant suggested that she visit modeling agencies in New York. After researching which agencies her favorite supermodels were at, Huffine and her mom took a two-day trip to New York to meet with two dozen agencies. She was rejected by all of them—except for one, which was starting a new plus-size division and told Huffine that she, a size 8 at the time, would be a perfect fit. “I never had a relationship with the term plus size before,” Huffine says. “So I was extremely surprised when that was offered to me.” 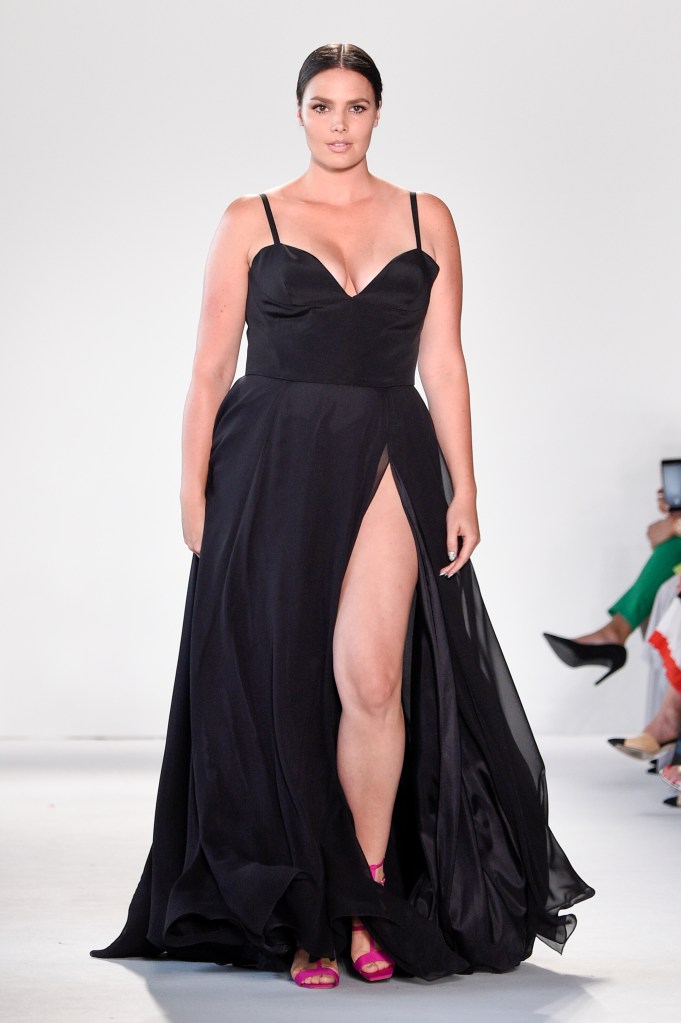 As Huffine was growing up, her mom, a size 14 at the time, never made her feel less-than because of her size. Huffine wasn’t aware that they shopped in a different section in clothing stores, and it was never a big deal when either of them gained weight. Even when it the came to the media, Huffine wasn’t negatively affected by the parade of rail-thin women, though she naturally gravitated toward models with bigger busts and hips, such as Laetitia Casta. The first time she was seriously aware of her size was when she started modeling and saw her waistline as an excuse for discrimination. “When they showed me pictures of other plus girls that they were representing, these girls to me were stunning,” Huffine says. “I was like, ‘What’s the catch? Why are we putting this other label on and making this subsection of a modeling agency?’”

My body is strong and it’s powerful and it’s unstoppable.

Huffine has been modeling for the past 18 years, but she only really counts the most recent decade. The first eight years were spent meandering in the fashion industry as a model who was considered plus size but was really in between categories. There was also a lack of brands willing to design plus-size clothes. And the ones that did cater to curvy women usually made clothes for more conservative customers (think business suits), which Huffine, a teenager at the time, was far from the face of. Even beauty campaigns, where clothing wasn’t the focus, turned Huffine away because of her size. “I thought, ‘Why can’t I go to a makeup casting?’ Everyone wears makeup. This doesn’t make any sense,’” Huffine says. 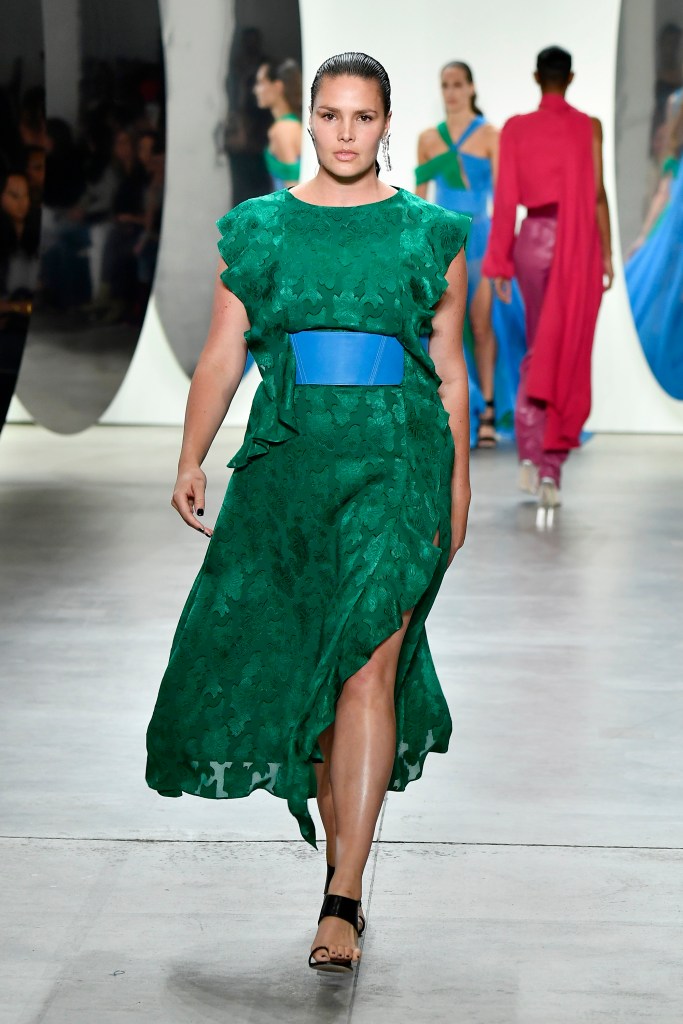 It wasn’t until the rise of social media and her following exploded with women who saw her as a real-life example of the average woman’s body that Huffine, now a size 12, saw a change. “Now, a woman can write you and say, ‘These words you said helped me. This photo helped me see myself differently. This image of you on vacation helped me get into a bathing suit,’” Huffine says. “There was obviously a cry for representation.” Soon after, the fashion industry followed: In 2011, Huffine was cast for the first Vogue Italia cover to feature a plus-size model in more than a decade. In 2014, she became the first plus-size model to appear in the Pirelli calendar, a historic fashion publication known for kick-starting the careers of supermodels such as Naomi Campbell, Kate Moss, and Cindy Crawford.

Clothes should be fitting me. I don’t need to bend.

And though her career seemed steady, with covers for Harper’s Bazaar, CR Fashion Book, and W, and a lucrative campaign for Lane Bryant, Huffine wasn’t free from size discrimination. As her profile rose and she became invited to more A-list events, Huffine struggled to find designers to dress her. Though she never heard a blatant no, timing was always an issue, with designers telling her that they would love to dress her, but it would take too much time and effort to create a non-sample-size dress for her before a red carpet. “It’s not my problem. It’s a loss on their part,” Huffine says, adding that sample sizes should be expanded to a size 14 “at the very least.” “There are incredible women who want to wear your designs and blast them out to the world, but if you’re not prepared to put them on our bodies, then it’s not meant to be.”

A lack of samples in her size was also a recurring theme on high-fashion photo shoots, where, in her early years, Huffine found herself apologizing when magazines and designers failed to produce clothes in her size. “I found myself literally apologizing for my body all the time because things wouldn’t fit me that they pulled off the rack, and I’d be embarrassed,” Huffine says. “Which is silly because these things should be fitting me. I don’t need to bend.”

Huffine’s struggle to find clothes in her size—in and out of the fashion industry—was why when she launched her activewear brand Day/One in 2017, she was adamant that it was size inclusive. The line—which recently launched its first retail partnership with plus-size styling service Dia&Co and its new activewear section Dia&Co Active—includes sizes from 0 to 32 and was inspired by her own fitness journey.

I don’t make apologies for my body.

In the last year, Huffine has run two marathons and more than 700 miles. The achievement, inspired by her husband daring her to run a marathon in 2015, has been saluted for challenging the idea of what a “runner’s body” looks like. But not everyone has been happy with Huffine’s accomplishment. “‘When I started to run, there was a lot of kickback, like, ‘Oh, she just wants to get skinnier.’ Then they would clock the photos that came afterward and be like, ‘Oh, look. Look how skinny she’s getting. She’s not proud of her curves,’” Huffine says.

She believes that the backlash is from the often-incorrect association between working out and losing weight, something that other plus-size models, such as Jordyn Woods and Ashley Graham, have also spoken out against. “There’s a misconception that everybody who is working out is only doing it to drop multiple sizes,” Huffine says. “Because all of our headlines and magazines are ‘Lose 15 pounds in two weeks with this workout plan, with this diet plan!’ I couldn’t list all the reasons why I’m running, but none of them have to do with changing my body.” 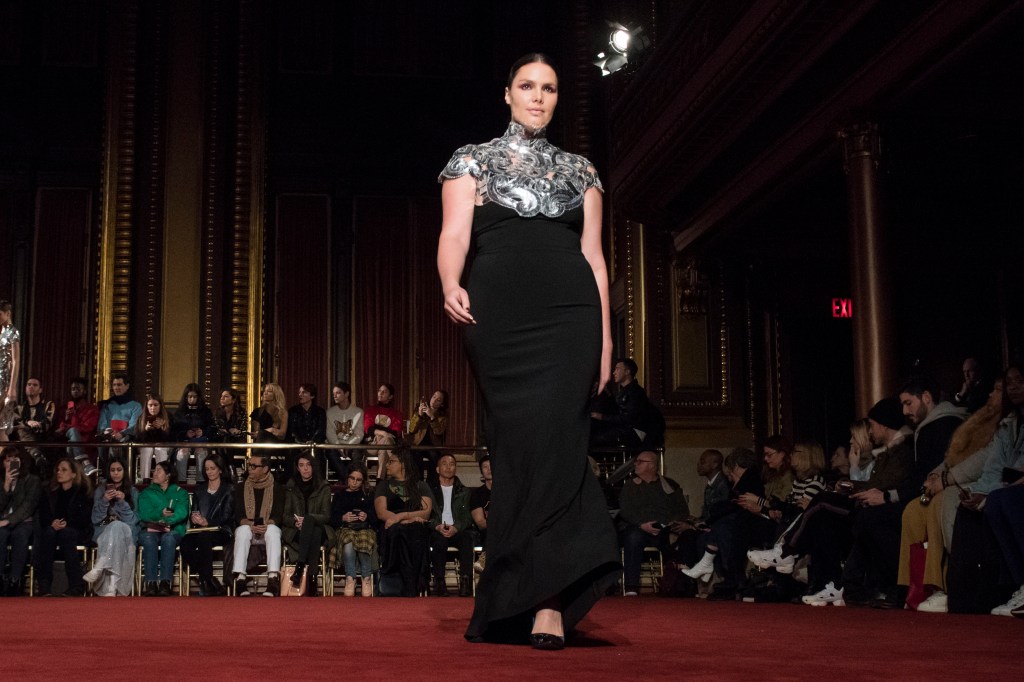 Though there are days when she feels less confident than others, Huffine can positively say that she no longer has insecurities with her body. Whether she’s “too big” or “too small,” Huffine’s body is hers, and she’s done apologizing for it. “I don’t have insecurities with my body as a whole, and I don’t make apologies for it,” Huffine says. “My body has taken me on this journey that I never expected. I’m never going to take it for granted or feel like it’s wrong, because it’s not. It’s strong and it’s powerful and it’s unstoppable.”