There’s always much talk about the new fall TV schedule, but just because a show is buzzy doesn’t mean it’ll float through to the next season. Here, a look at every Fall 2014 show that’s been canceled, renewed, and those whose fate still hang in the balance. 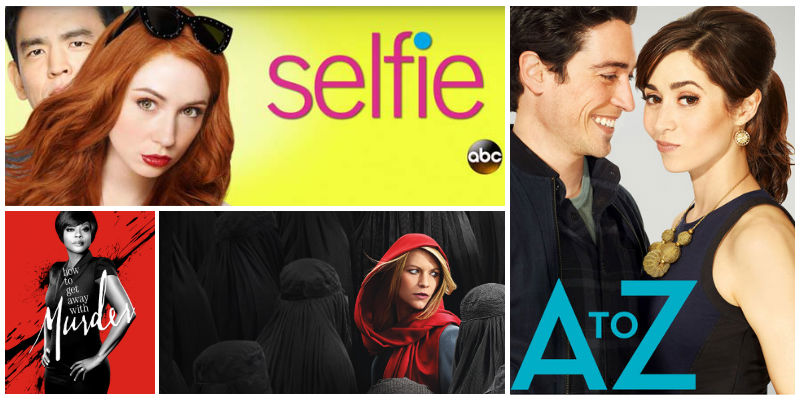 “A to Z” and “Bad Judge” have already been cut from NBC’s schedule, and “Manhattan Love Story” got the boot early on from ABC. The alphabet network also recently cut the string on “Selfie,” which joins CBS’ “Reckless,” TNT’s “Dallas,” and ABC Family’s “Mystery Girls”—the Tori Spelling/Jennie Garth “comedy” just wasn’t meant to be.

Bob Odenkirk is sitting very pretty over at AMC, since his “Breaking Bad” spin-off “Better Call Saul” was renewed before it even aired! It joins FX’s “Fargo” and “The Strain,” which are also on for season 2, along with Showtime’s “The Affair” and “Penny Dreadful,” 50 Cent’s show “Power” on Starz, and USA’s “Satisfaction” and “Sirens.” In “duh” news, shows like “The Big Bang Theory,” “It’s Always Sunny in Philadelphia,” and “Pretty Little Liars” aren’t going anywhere.

According to TV By The Numbers, NBC’s “Marry Me,” “About a Boy,” and “Constantine” are likely to be canceled, while Debra Messing’s “Mysteries of Laura” is just barely holding on with a new nine episode order. Over at FOX, “Mulaney” is almost certain to be cut from the schedule while veteran comedy “The Mindy Project” isn’t in the clear just yet—it was brought back for only 15 episodes this season, which means it’s not a sure bet with viewers or the network.

MORE: A Compelling Case For Why You Should Binge-Watch ‘Ringer’ Now

The CW’s “Jane The Virgin” got tons of buzz and critical praise when it premiered, but it isn’t necessarily a hit with viewers, so the jury’s out on that one. “The Flash” on the other hand? Things are looking mighty good for that superhero. And while CBS’s dramas like “The Good Wife,” “Elementary,” and “Person of Interest” will most likely hold tight on the schedule, it could be the end of the road for veteran procedural “CSI.” Still on the bubble—but surely facing certain death— are sitcoms “The Millers” and “The McCarthys.”

MORE: 6 Legal Dramas To Watch if You Love ‘How to Get Away With Murder’

ABC was the first to enter the cancellation ring, but if TV By The Numbers can be trusted, they’ve got a robust renewal announcement to make: “Blackish” and “How To Get Away With Murder” are two of the biggest new shows this year, while “Nashville,” “Scandal,” “Grey’s Anatomy,” “Once Upon a Time,” “Castle,” “Modern Family,” “The Goldbergs” and “The Middle” can sit back, relax, and make some hiatus vacation plans.

Check out the full list of canceled and renewed shows below:

Game of Thrones, HBO (renewed for 5th and 6th seasons)

Murder in the First, TNT

Orange is the New Black, Netflix

Parks and Recreation, NBC (renewed for 7th and final season)

The Mentalist, CBS (renewed for 7th and final season)

Under the Dome, CBS

When Calls the Heart, Hallmark