Pretty much every Sex & The City-lover under the sun binged Emily In Paris the second it dropped on Netflix, desperate for a similar fix of escapist city drama and romance played out in over-the-top ensembles. That said, even the boldest of dressers can agree that, for the most part, Emily’s personal style was a little too over-the-top. TBH, I don’t understand why we aren’t all hyping up Camille, the (only!) true fashionista of Emily in Paris.

Don’t get me wrong—Patricia Field, the costume designer behind SATC as well as EIP, positively nailed the styling. Emily is meant to look out of place amidst her chic Parisian counterparts. The others play it cool, rocking a French minimalism far too subtle for her American taste. Her outfits are intentionally a touch garish, a bit too over-accessorized (Field even admitted she thought Emily’s bag charm was fugly!).

In making Emily’s look just extra enough that it crossed over from camp to tacky—or ringarde, as she’s told on the show by French fashion designer Pierre Cadault—Field nailed the visual contrast between basic betch Emily and the other characters, with whom she longs to share that French je ne sais quoi.

That said, Emily probably thinks Camille’s fashion sense is a bit bland overall, which is hysterical, because I would literally throw out every item in my closet if you told me right now I could trade wardrobes with Camille, played by Camille Razat (It’s a chic name, why change it?). For the most part, Camille rocks a palette of neutrals and blacks—but unlike her American friend, her personal style is far from basic. 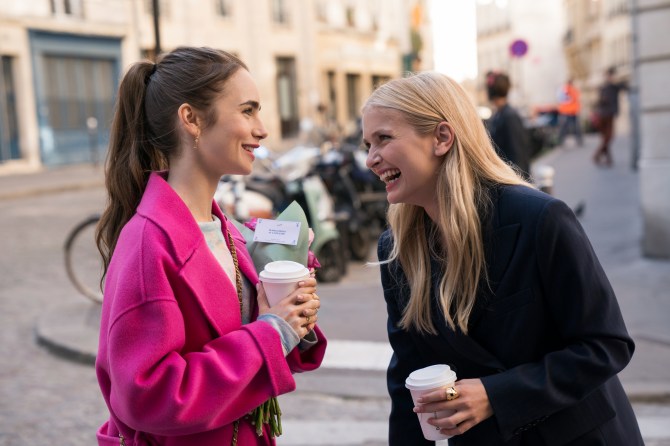 Everything Camille wears fits her flawlessly. Like, get me a French tailor ASAP. When she first approaches Emily at the flower stand in episode four, she struts up in a perfectly-oversized black blazer paired with dark-wash denim with contrasting cuffs, a brown suede-fringed Maje M Bag and—made for walking—red Western-style booties. Bonus points for the chunky gold rings. Overall, it’s the ideal running-errands-in-France ensemble if I’ve ever seen one!

While many of the show’s stylistic details feel just a few years stale (Maybe even just a few months; that’s all it takes for influencers to completely 180° their aesthetics these days.) Camille looks straight off of every 2021 fashionista’s mood board. Her makeup is minimal and her middle-parted strands look soft and natural. Her look exudes the kind of effortless, mesmerizing glamor we’d all like to think we possess when sitting at a coffee shop, walking around town solo or convincing ourselves the man sitting across from us on the subway is secretly in love with us. We don’t actually look that good, but Camille sure does. 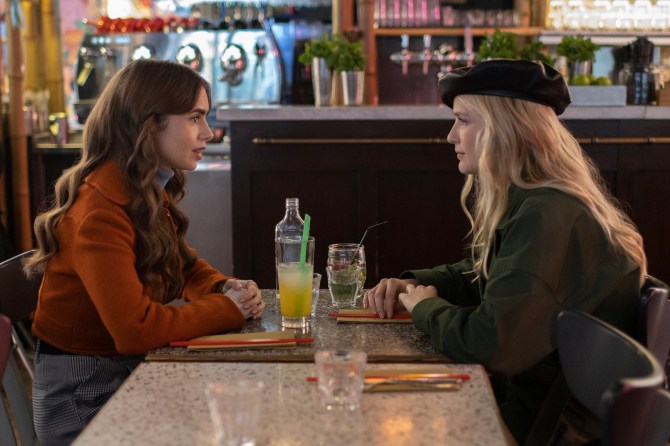 Throughout the series, Camille shines by pairing perfectly-fitting wardrobe staples with just the right amount of playful accessorizing (Did you hear that Emily? Not as many accessories as your body can physically withstand.). On her list of absolute essentials? A slightly-oversized black leather moto jacket, as seen in episodes five and six. A newsboy cap, perfectly offset by her platinum strands in episode eight, a style which served as the perfect American foil to Emily’s constant need to wear French berets. A silk scarf, the kind she adjusts on Emily at the start of episode five (“You know, French way, on the side!) and then wears herself later on in the same episode. Lastly, more Western-inspired boots, a playful footwear choice styled differently in both episodes four and five. 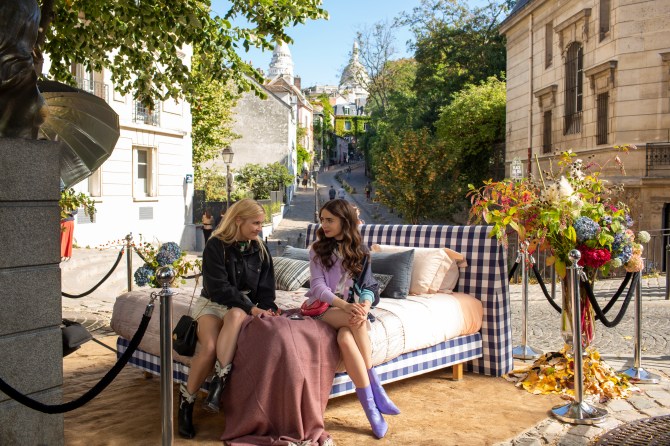 Seriously, if you watch this show and find yourself wanting to be anyone other than Camille, I question both your judgement and your taste in accessories. Emily might have Gabriel’s heart, but she will never, ever have Camille’s fashion-forward flair.