Rachelle Vinberg was on the subway in New York City when she was approached by Crystal Moselle, a filmmaker, who noticed that she and her friend, Nina Moran, were on their way to skateboard. This woman just came up to us and was like, ‘How are you guys? Are there more girls who skate?’”

Little did Vinberg know but Moselle would soon cast her and Moran, as well as a few other female skateboarders in their circle of friends, as the lead actresses in her 2016 short film, That One Day. Two years later, the short film became a feature-length movie, titled Skate Kitchen, which premiered at the Sundance Film Festival and earned rave reviews from critics. A couple months after the film’s premiere in August 2018, Moselle called Vinberg and her friends to let them know that they would be the stars of HBO’s new show, Betty.

The teen comedy, which premieres on May 1, follows a circle of female skateboarders in New York City. Vinberg plays Camille, an outcast who meets the other skateboarders but is hesitant to become close friends with them because of her fear that she would lose the respect of the male skateboarders she looks up to. “It’s not worth it to her at the beginning.. Her priorities aren’t set straight,” Vinberg tells StyleCaster. 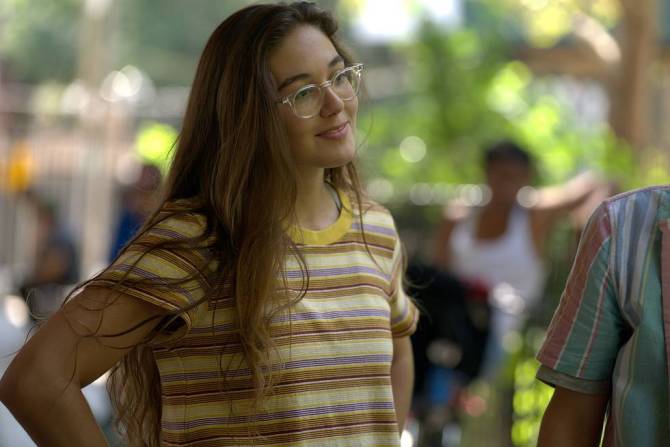 The title of the show is based on a sexist nickname that men would often call female skateboarders. While the term isn’t well-known now, Vinberg views the title as a way to reclaim the nickname for female skateboarders who are made to feel less-than because of their gender. “In the ‘90s, girls who skated or cute girls who hung out at skateparks were called Betties or Skate Betties,” Vinberg says. “The title is trying to reclaim that term. No one knows what that means now, so we can shift the language because of that.”

As a female skateboarder, Vinberg is used to sexist comments on her Instagram. “You will see people posting like, ‘Yo. Why is she on here? She sucks. There are so many guys better than her,’” she says. While she doesn’t receive the same comments to her face, she does often hear from men who want her to prove her skills to them. “In person, you’ll get a lot of, ‘Wow. You can do a kickflip? Do a trick for me,’” she says. “A month ago, I almost got into a fight with this guy because I was walking and he just got in my face and was like, ‘Bet you can’t do an ollie.’ I was like, ‘Yo, get the hell out of my face.’” 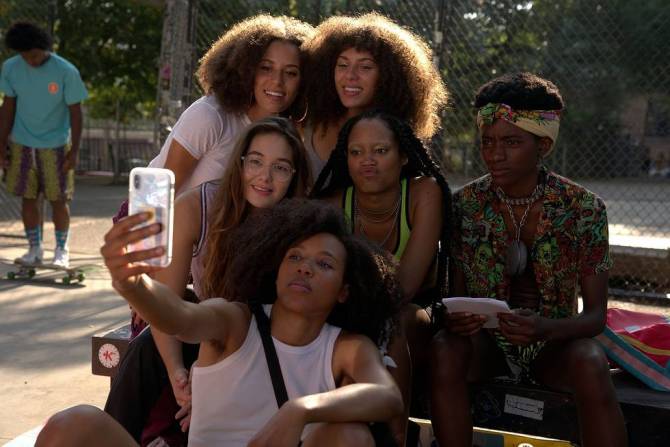 But it doesn’t matter how much they ask. Vinberg doesn’t perform the tricks for them. “It’s like, ‘Why do I need to?’” she says. “I used to want to. But then Nina  told me something really funny. They’d be like, ‘Do a kickflip.’ And she’d be like, ‘You do one first.’ And then they’d get all frazzled and she’d just go off on them. I don’t need to prove myself to them. Whatever, why do they need to know I can do it? I know I can do it.”

As for how Betty is different than other shows about female friendships, Vinberg believes the show sets itself apart because it’s about real friends who are real skateboarders. (And yes, you bet that they do their own stunts.)

“I don’t think there’s ever been a show about girls skateboarding,” she says. “The friendship is authentic. I don’t know how many shows are really based on true friendships. A lot of the scenes of us talking, it’s just us talking. The chemistry comes from real things.” 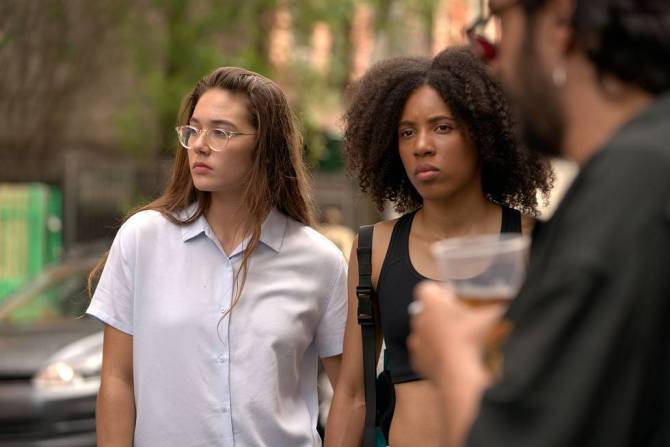 Ahead, we interviewed Vinberg for StyleCaster’s “Screen Time,” where we asked her about what she’s watched in quarantine and the movie that makes her cry every time.

What have you binged while in quarantine?’

I watched Curb Your Enthusiasm. I’ve been watching a lot of movies. I watched Y Tu Mamá También for the first time a few days ago. I love that movie. I watched Jojo Rabbit. I watch more movies than shows. I like movies that will make me cry.

What’s a show or movie that will put you in a good mood?

Definitely Stand By Me.

What was your favorite show or movie as a kid or a teen?

Definitely Stand By Me. It’s my favorite. Nina and I actually bonded over that.

What’s a show or movie you can quote every line of?

Finding Nemo, for sure. Or Lion King!

What’s a show or movie that’ll make you cry every time?

In StyleCaster’s “Screen Time” series, we interview our favorite celebrities about the movies and TV shows that defined their teenage years, that make them cry every. single. time., that they turn on for comfort and what’s getting them through this quarantine.