Since joining the NFL, Cam Newton‘s net worth has only continued to grow—and it doesn’t look like this trend is stopping anytime soon.

Newton, who was born in Atlanta, Georgia, kicked off his career in the NFL with the Carolina Panthers in 2011 while still finishing up his college degree at Auburn University in Auburn, Alabama. Newton quickly made a name for himself in the league, earning the title of NFL Rookie of the Year and Offensive Rookie of the Year by February 2012. Between 2013 and 2017, the quarterback led the Panthers to three division titles and four playoff appearances. His most successful season came in 2015, when Carolina made it to the Super Bowl. Cam was named NFL MVP the day before the 2016 Super Bowl took place. While the Panthers ultimately lost out to the Denver Broncos that year, Newton was still voted No. 1 to the NFL’s Top 100 Players of 2016.

Still, that doesn’t mean Newton’s career has been without its challenges. The quarterback has faced many injuries throughout his time in the NFL, including fractures and tears in his ankle, ribs, back, shoulders, legs and more. In January 2019, Newton had surgery on his right shoulder before suffering from a Lisfranc fracture in his left foot, which also required surgery. He ended up missing the majority of the 2019 season due to his injuries, and was eventually released by the Carolina Panthers and signed to the New England Patriots for the 2020 season.

In 2021, Newton was released once again by the Patriots and returned to the Panthers halfway through the season. The quarterback signed a multi-million dollar contract with Carolina for another year at the time. But how much is he getting paid, exactly? Keep reading below to find out Cam Newton’s net worth, NFL salary and Panthers deal.

How much does Cam Newton make in the NFL? 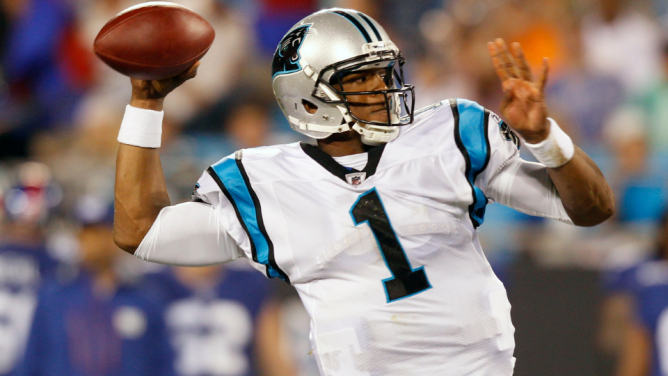 So, how much has Cam Newton earned in the NFL so far? For his rookie deal with the Carolina Panthers, Newton earned around $5.5. million per year thanks to his four-year $22 million contract signed in 2014. The following year, the quarterback signed a contract extension for a reported $103.8 million, per Celebrity Net Worth. This means that over the course of his first nine years in the NFL, Newton earned well over $121 million as a base salary alone.

How much is Cam Newton’s Panthers contract?

In November 2021, Newton signed a one-year deal with the team worth up to $10 million. According to NFL Network, this deal includes a whopping $4.5 million fully guaranteed and a $1.5 million roster bonus for the returning quarterback. The deal marked a reunion between Newton and the Panthers after the former MVP spent the preseason and all of the 2020 season with the New England Patriots. By comparison, Newton’s contract with the Patriots in 2021 was estimated to be around $14 million, according to ESPN, which included a $2 million signing bonus and fully-guaranteed base pay of $1.5 million. Given that he left the team midway through the season, however, it’s possible the quarterback walked away with only his signing bonus and guaranteed base salary, amounting to $3.5 million.

Newton’s return to the Panthers was set in motion by team coach Matt Rhule, who reportedly reached out to Newton in mid-November to determine his interest in returning to Carolina. The team was in need of a new quarterback after following fellow QB Sam Darnold’s injury, a cracked shoulder scapula in his throwing arm which landed him on injury reserve with a four-to-six week recovery timeline. When Newton was asked to return to the Panthers, “He emphatically said yes,” Rhule said at the time, per NFL Network.

“You have a guy with Cam’s ability level sitting out there,” Rhule added in a press statement. “We have an open opportunity. We have a team that we feel like can win,” he continued. “We owe it to our players to try to go win. We owe it to our fans to try to go win …. He’s a former MVP. So to have a guy like that have a chance to come in, just to me was just a no-brainer.”

What is Cam Newton’s net worth?

Celebrity Net Worth reports that Cam Newton’s net worth is $75 million as of 2021. This includes his multi-million dollar salary with the Carolina Panthers, along with tens of millions of earnings thanks to endorsements with companies like Under Armour, Beats by Dre, Gatorade and more.