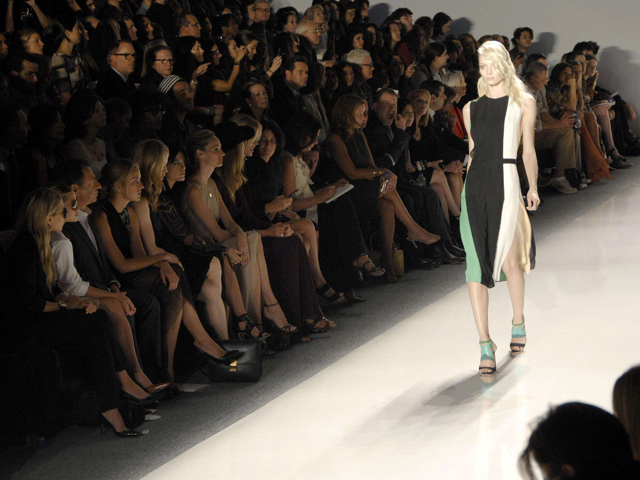 So you want to go to New York fashion week and you aren’t a magazine editor or department store buyer? Scoring an official invitation isn’t easy, but luckily for all those fashion fiends out there backdoor ways to buy your way in to the fashion week experience exist—you just need to know where to look. Here, the top five ways to buy your way in to insider’s access.
1. American Express To The Rescue: American Express each season offers access to the Mercedes Benz Fashion Week tents at Lincoln Center to its cardholders via a Skybox that overlooks the runway (perk of said skybox is booze and snacks, a privilege that regular showgoers don’t have access to, trust us). Tickets sold out in record time this season for the Spring 2013 shows offered including Diane von Furstenberg and Lacoste. Packages that went on sale to platinum and centurion cardmembers sold out within the first hour. Tickets that later went on sale to gold cardmembers sold out within the first 20 minutes. In other words, if you are an American Express cardholder start prepping now to get into the Fall 2013 shows (those happen in February). There is also a cardmember only show being headlined on September 13th by Rachel Zoe where seats range from $50 for standing access on up to $250 for a prime spot. The last we checked a few spots are available, but likely not for long.
2. Peruse Craigslist: Do a quick search on Craigslist and you’ll find sellers offering up tickets to the likes of Milly and Lela Rose. Undoubtedly designers aren’t too happy about this, but it is one step above trying to sneak your way in. Last we checked tickets for Chris Benz’s presentation were selling for $99 a piece, while a seat to Whitney Port’s Whitney Eve show was selling for $399.
3. Become A Client: It’s certainly a pricy way to gain access to fashion week, but a pretty effective one. If you are the major client of a designer, chances are pretty high that you’ll be invited to that designer’s show. Designers like Carolina Herrera, Oscar de la Renta and J. Mendel make it a point to reserve seats each season for clients, some of which are placing orders just as big as stores. We have to say, if you are going to spend money for access to the shows, you might as well have the bonus of an amazing wardrobe.
4. Use A Ticketing Service: Various online services boast being able to get fashion week invites for clients (its the same mentality as ticket brokers who offer Super Bowl seats at a premium). VIP Concierge based in Beverly Hills, California offers fashion week packages. Another option is membership based concierge service Insider, based in New York City, which also gets its clients into fashion week events.
5. Search Hotel Packages: Various hotels throughout New York City offer fashion week packages that include a room and access to a fashion show. The Gramercy Park Hotel is offering one-bedroom suites from $2,000 a night that come with “seats at a top designer’s Spring 2013 collection show in the Tents at Lincoln Center,” according to the hotel. The Plaza is offering a fashion week package as well. Along with a $865 per night room you’ll also receive an invitation to menswear designer’s Angelo Galasso’s preview.
Have a backdoor way of getting into fashion week? Do share!