Came in with a bang. BTS’ VMA 2020 performance of “Dynamite” was as explosive as we expected. Jungkook, RM, Jimin, V, Jin, Suga and J-Hope performed their latest single at the 37th annual MTV Video Music Awards on Sunday, August 30, via pre-recorded performance filmed in South Korea. (Though the 2020 VMAs were held in New York City, several performances were pre-recorded or filmed virtually because of the current health crisis.)

Their VMAs performance, which was their first televised performance of “Dynamite” since its release in August, started with the boys against a green screen of the Brooklyn Bridge before Jungkook went into his first verse. Dressed in snazzy suits and vests, the performance went on with the green screen changing to different New York City locations, including Times Square, where a giant billboard displayed the “Dynamite” single art (and an ad for the VMAs). The performance ended with BTS performing the chorus as fireworks went off behind them over New York’s skyline.

Along with their performance of “Dynamite,” BTS was also nominated for four awards at the 2020 VMAs: Best Group; Best Pop Video for their 2020 single “ON“; Best K-Pop Video for “ON”; and Best Choreography for “ON.” “Dynamite,” which was released on August 21, is BTS’ first full-English single. “Dynamite” is the first single from BTS’ upcoming album due later in 2020. The disco-inspired pop song was written by David Stewart and Jessica Agombar, the duo behind songs like the Jonas Brothers’ 2019 “What a Man Gotta Do.” 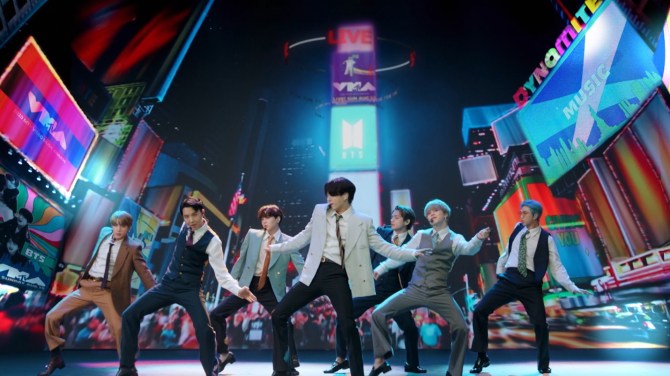 At a press conference for “Dynamite” in August, RM talked about the seven-member K-pop boy band didn’t plan on releasing a single in August, but knew once they heard the track that they had to record it for ARMYs around the world.

“The release of ‘Dynamite’ wasn’t in our plans at all, RM said at the time. “As soon as we heard it, we thought it was really fun and exciting, a fun and cheery song that wasn’t that serious. It just made us feel good when we heard it,” he explained. “We really wanted to share this energy with the fans as soon as possible.”

RM also called “Dynamite” a “new challenge” for the band because all of the lyrics are in English. Though RM is fluent in English, other BTS members are not. Still, the Bangtan Boys were up for the challenge and knew from the start that “Dynamite” would be their first all-English single. “When we were recording the guide version, we felt the English version fit the melody a little bit better,” V said. 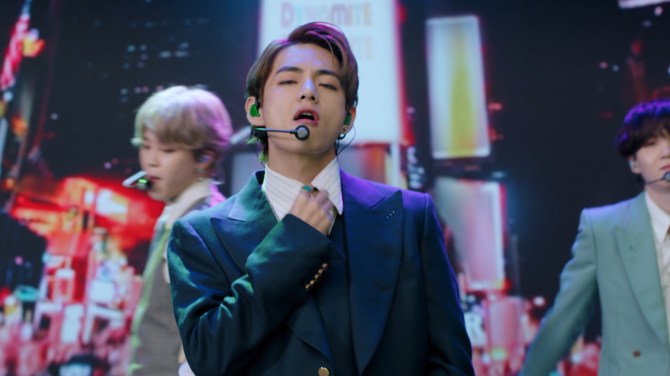 As for what the song is about, the band explained that “Dynamite” was meant to be a beacon of light amid the dark times in the world at the moment. “Everyone in the world is going through tough times right now. Nobody expected this,” Jimin said.

Suga added, “It’s dedicated to all the people who feel like they’ve fallen down while running a marathon. Even if you’re going through tough times, let’s do what we can in our places, and find freedom and happiness through dance and music.”

“Dynamite” comes less than a year after BTS released their most recent album, Map of the Soul: 7, in February 2020. Their VMAs performance also comes a year after the Bangtan Boys were nominated for their first-ever VMA. BTS was nominated for five VMAs in 2019 and won awards for two categories: Best Group and Best K-Pop. 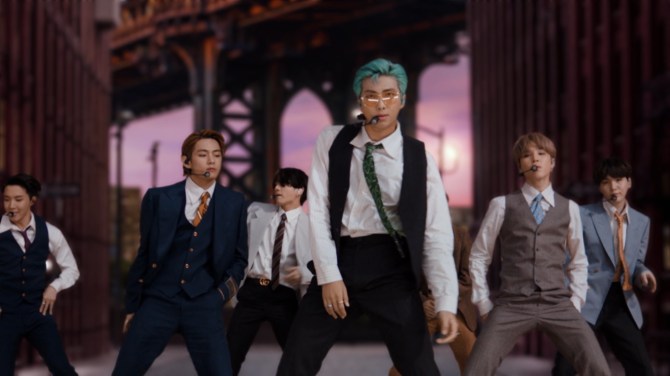 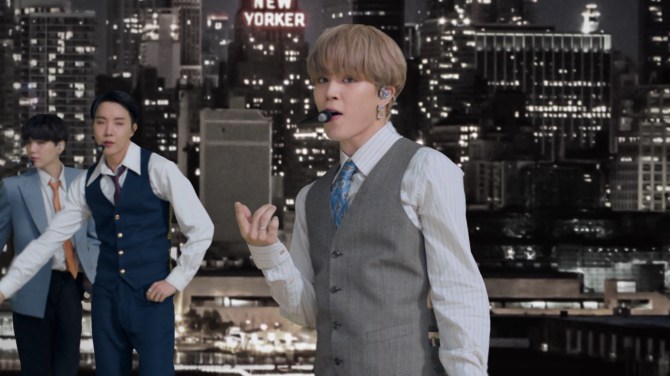 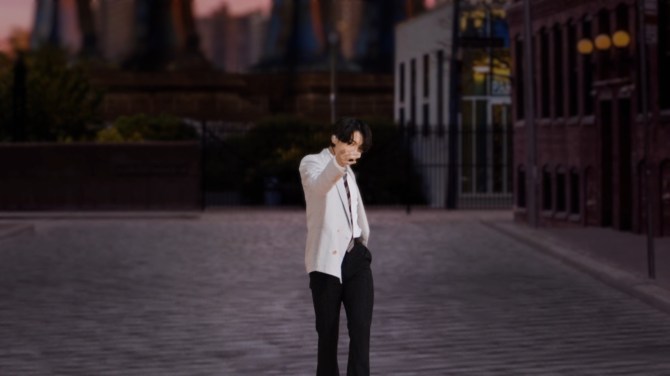