There’s no doubt that BTS has changed since their debut in 2013. While they’re the same boys at heart, the band has only evolved for the better. BTS’ hair colors have changed over the years as well. At the time of their debut, most of the Bangtan Boys had dark hair (shout out to V’s blonde). Since then, though, the Bulletproof Boy Scouts have dyed their hair almost every color in the rainbow, from ashy grays to light purples to platinum blondes.

It’s no secret that BTS change their hair color often. Every time we look away, V, J-Hope or Suga has different neon hue on his head. So it makes sense that even the most devoted ARMYs can’t remember each of BTS’ hair colors. To assist in this, we rounded up the “Boy With Luv” band’s hair colors over the past seven-ish years, from RM’s signature blonde to Suga’s icy white.

Whether it’s their eyeliner, their lip colors or their hairstyles, BTS has never played it safe when it comes to their beauty looks, and we commend them for that. Find out which BTS hair color is your fave ahead. We already know which ones we’re bringing to our stylists for our next dye job. 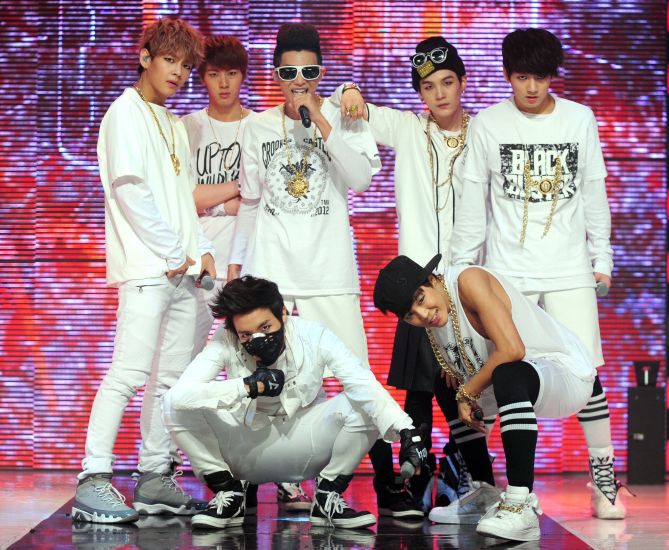 June 2013 marked BTS’ debut with their song “No More Dream” from their album, 2 Kool 4 Skool. As seen from their performance on Simply K-Pop at the time, the band’s style was a lot different back then. In terms of hair, six of the five of the seven members had black hair at the time. The exceptions were V, who had dark blonde hair with black roots, and Jin, who had a chestnut-y brown. Of course, as ARMYs know, the other
BTS members’ black hair didn’t stay that way for very long. 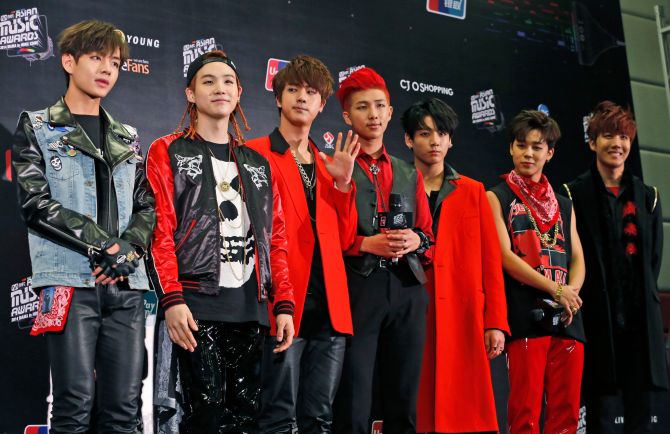 At the Mnet Asian Music Awards in December 2014, BTS wowed on the red carpet with their show-stopping red and brown hair colors. With the exception of Jungkook and Jimin, who had black and dark brown hair at the time, each other member had either light brown or red hair. Our personal favorite, of course, is RM, whose bright red locks really stood out, as the band paired their fiery hues with black and red-accented outfits. 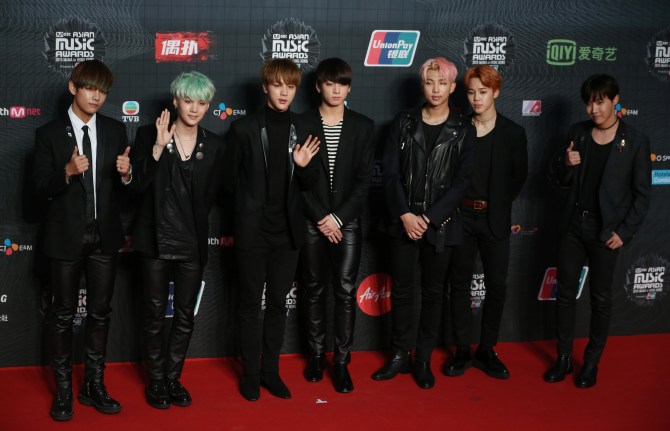 When it came time for the 2015 MAMAs in December 2015, many members of BTS had dyed their hair. While Jungkook stuck to black and J-Hope went back to his natural hair color, Jimin dyed his hair red in a similar shade to V and Jin. Suga went platinum, while RM dyed his hair blonde only a shade or two darker. 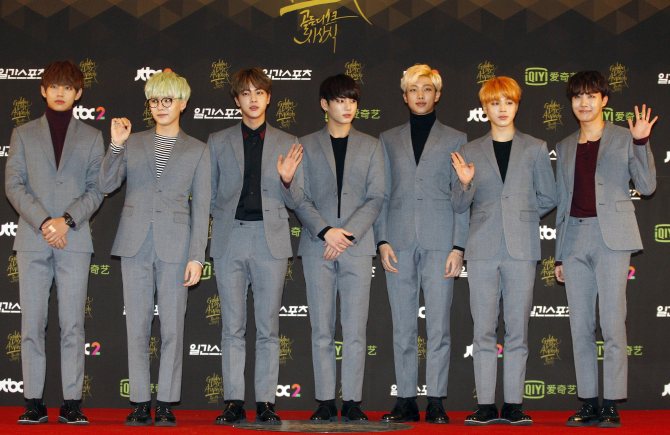 At the 30th annual Golden Disk Awards in January 2016, BTS’ hair colors had changed again. Jimin’s hair was now orange, while RM and Suga had brighter and brassier blonde locks than they did before. 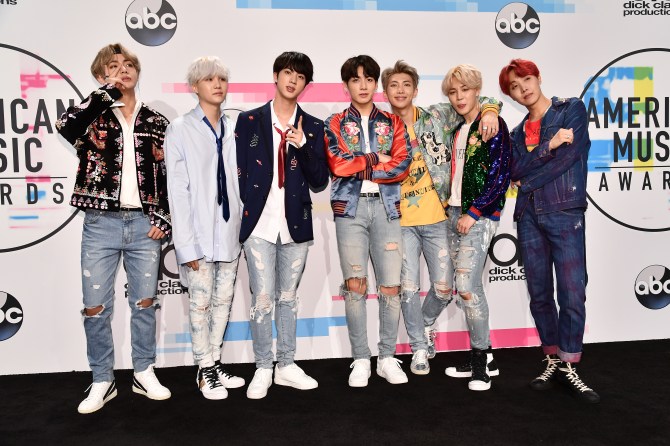 At the American Music Awards in November 2017, BTS walked the red carpet in a range of hair colors. Jungkook stuck to his signature black, while Suga looked cool in an icy white. At the time, J-Hope’s hair was bright, firetruck red, while RM had an ashy gray. Jimin stood out in bright blonde, while V rocked a dusty brown. 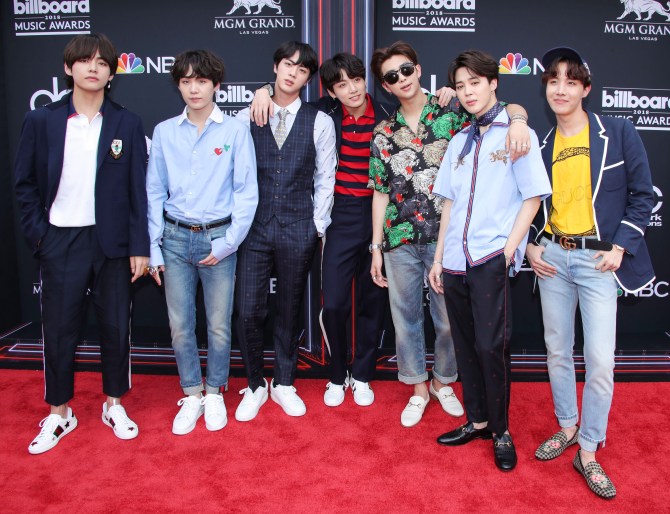 Natural hair colors were the theme at the Billboard Music Awards in May 2018, where each of BTS’ members had dark hair. While some members had pitch black hair for the first time since their debut, others more subtle dark brown. 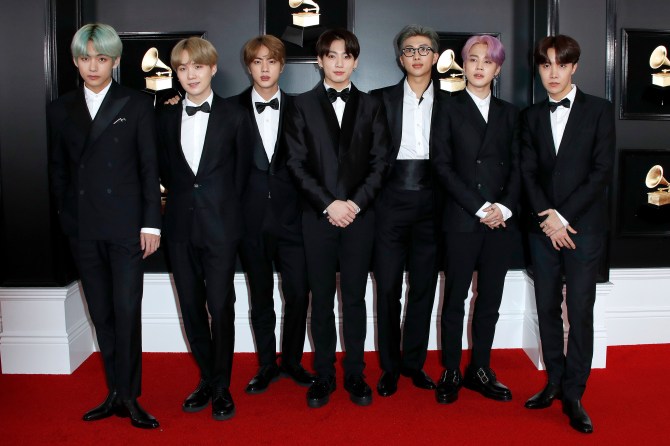 By the Grammys in February 2019, BTS had switched up their hair again. Jungkook and J-Hope kept their black locks the same, while the other members dyed their hair various shades of brown and gray. Our favorite from the bunch at the time was Jimin’s gradient blue hair. 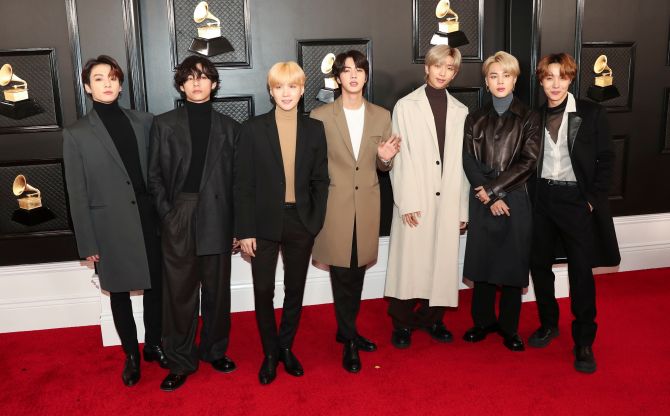 Who could forget BTS’ 2020 Grammys performance in February? The band killed it with Lil Nas X as they performed “Old Town Road” on a revolving stage. As for their hair colors, BTS kept it more natural with no neon shades. Jin, V and Jungkook had black and dark brown hair, while RM, Jimin and Suga showed off different shades of bleach blonde. J-Hope, on the other hand, looked cool with a medium-tone brown.