Cute family bonding! Brooklyn Beckham gave his mother Victoria Beckham all the love for her fashion show. The Beckhams made a stellar appearance at the Spice Girl’s show at Paris Fashion Show on September 30, 2022.

After her fashion show, the fashion designer went out on the runway as her family sat in the front row. According to Hello Magazine, as she walked by, her son Brooklyn blew her a kiss. She also hugged her soccer star husband David Beckham and her close friend Eva Longoria. Brooklyn’s wife was also in attendance and it was the first time that Victoria and Nicola have been pictured at the same event after the emergence of the dress drama.

In early August 2022, a Page Six insider revealed that Nicola and her mother-in-law Victoria Beckham have a strained relationship. “They can’t stand each other and don’t talk,” the source said. “The build-up to the wedding was horrendous.” Nicola married Victoria and David Beckham’s son Brooklyn Beckham in April 2022 after three years of dating. The source continued that Nicola didn’t want Victoria “to be any part of the planning, and she wouldn’t clue Victoria in on anything. Communication was minimal.” The source also said that Brooklyn’s parents aren’t even talking to their own son. “They haven’t spoken to him much in the last few months,” the insider said. The source also claimed that Brooklyn’s relationship with his parents only became worse after he posted a cover of Nicola on Tatler magazine, which featured the headline: “The New Mrs. Beckham.” 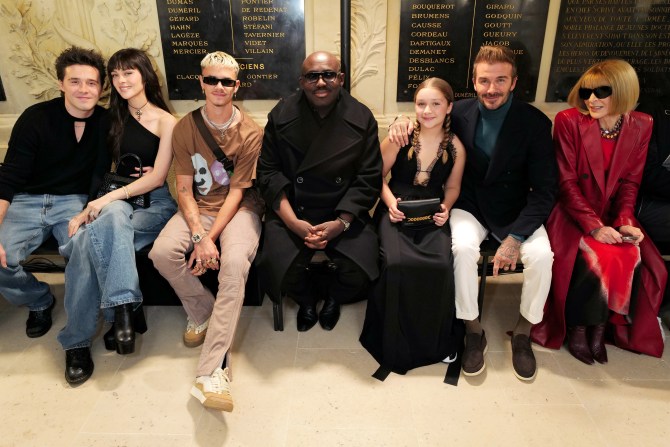 According to a source to Daily Mail, David reportedly “read the riot act” to his son in regards to the dress drama and how the couple handled it. “I don’t think David has ever lost his temper with Brooklyn or had cause to talk to him harshly, but that has now finally happened. He had it out with him and told him: ‘We don’t do this in our family – and you know that we don’t do this in our family.” David reportedly told his son, “What happens next is up to you, but we are done with the drama.” The source continued, “David was really appalled by the Grazia interview because it seemed to be washing the family dirty linen in public – and he said that [Brooklyn’s brothers] Romeo and Cruz are also hurt by it. It was probably a shock as he’s never done anything other than tell Brooklyn how much he adores him.”

In the Grazia interview, Nicola cleared the air on what actually happened about the alleged dress drama. “Well, I was planning on wearing Victoria’s wedding dress, and I was truly so excited to be able to wear a design that my future mother-in-law created. I thought that was so beautiful and such a beautiful story.” She continued, “Victoria called my mom and said her atelier couldn’t make it. So, I spoke to my mom and Leslie, and I was like, ‘Well, unfortunately, this can’t happen, so what’s the next step?’ I’ve been a fan of Valentino and their couture for so long. I was really lucky to be able to travel to [the atelier] to try on the dress. That’s really what happened.” She revealed how she felt about the  “When I read things that say [things like] I was never planning on wearing a [Victoria Beckham] dress or things like that, it does hurt my feelings. I try not to let it, but it’s just not the truth. It’s just a bit of a bummer when you’re like, ‘Oh, people think that,’ but it’s just not true.”