Inked up. Brooklyn Beckham showed off his new tattoo that honors his wife Nicola Peltz. He took to Instagram to show his affection for his wife amid reports that she and his mother Victoria Beckham don’t get along.

Brooklyn showed off his tattoo in an Instagram story on August 11, 2022. The tattoo features the word “married” on his hand in cursive. In a caption, he wrote, “Surprised my baby @nicolaannepeltzbeckham.” This isn’t the only tattoo he got in tribute to Nicola. At Variety‘s Power of Young Hollywood event on August 11, 2022, he also revealed that he has a tattoo featuring a sketch of her eyes located on the back of his neck. On why he got his wife’s eyes, he said that she “has the most gorgeous eyes in the world.” In late May, he also tattooed his vows. “Let me start by saying that words cannot even describe my love for you. Just looking at you I see my future and it feels like a dream,” the tattoo reads. “You are my world and I continue to fall more in love with you every single day.”

The new tattoo comes after reports came out that Nicola and Brooklyn’s mom don’t get along. In Brooklyn’s Variety profile that came out on August 10, 2022, he and Nicola dispelled those rumors. The drama, according to sites, supposedly started when she didn’t wear the wedding dress that Victoria designed. She instead opted for a Valentino dress. “I was going to and I really wanted to, and then a few months down the line, she realized that her atelier couldn’t do it, so then I had to pick another dress,” she confessed. “She didn’t say you can’t wear it; I didn’t say I didn’t want to wear it. That’s where it started, and then they ran with that.” Brooklyn added on, “I’ve learned they’re always going to try to write stuff like that. They’re always going to try and put people down. But everyone gets along, which is good.” 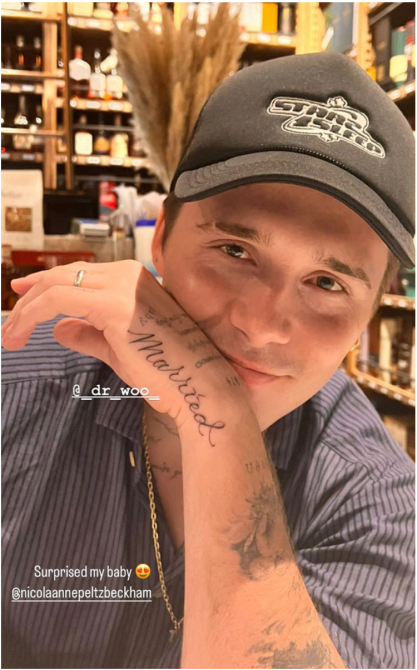 Everything unfolded when a source told Page Six on August 4, 2022, that Nicola and Brooklyn’s mother were not on good terms. “They can’t stand each other and don’t talk,” the insider said of Victoria and Nicola’s relationship. “The build-up to the wedding was horrendous.” According to Page Six’s source, Victoria and Nicola’s drama started after Nicola decided that she didn’t want her mother-in-law to be involved in “any part of the [wedding] planning.” The insider continued, “She wouldn’t clue Victoria in on anything. Communication was minimal.” The source added that the “non-stop petty drama” between Victoria and Nicola has also affected Victoria and her husband David Beckham’s relationship with Brooklyn. “They haven’t spoken to him much in the last few months,” the insider said. The source also claimed that Brooklyn’s relationship with his parents only became worse after he posted a cover of Nicola on Tatler magazine, which featured the headline: “The New Mrs. Beckham.”

Another source came forward to Page Six on August 10, 2022, to reveal that the drama goes further than the dress. “Victoria and Nicola are just collateral damage. It’s not just about two women — it’s two families coming together,” the source said. “It’s pretty obvious there’s an issue between the two families. Everybody needs to find their place. They’re just not quite connecting yet.” The source said that the problem between everyone is branding. Brooklyn’s parents want their son and their daughter-in-law to follow in their footsteps of leading clothing lines, perfume, and other ventures. “There is a very deliberate move orchestrated by Nicola and her mom and funded by Nelson. There is a reason why Brooklyn and Nicola are now ‘Peltz Beckham.’ It’s all about branding,” the source dished about Nicola’s billionaire father Nelson Peltz. “I think that Nicola and her mom come up with ideas, Nelson can fund anything and he says yes! But for David and Victoria, it has to have some substance.”

On August 6, 2022, Nicola posted two pictures of her crying on Instagram. She posted it with the caption, “Sometimes I find it hard to show the sad bits of me. Growing up with seven siblings and two very strong parents, made me really tough, they hammered it into me to not let people bring me down or hurt my heart. It made me put such a wall up to protect myself especially in this industry. We all have days where people make you feel bad and it’s okay to be hurt by it.” She continued to give her followers assurance, “I just thought I would write something because I never show this side of me here. I wanted to show this side of me. I love you all so much and truly appreciate all of your support. It means so much when you guys are kind on my page I want you to know i see you, I hear you, and it means a lot to me 💘” Brooklyn liked and commented on the post, “You have the most amazing heart xx. I love you so so much xx.”