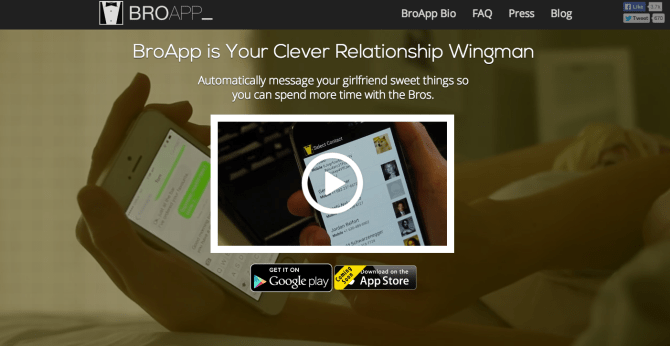 Just when you thought guys couldn’t be any lazier, a new app has debuted that proves otherwise. Meet BroApp, a way for dudes to text their girlfriends without actually texting their girlfriends. This is the stuff romantic dreams are made of, ladies.

It works like this: guys download the app, and they’ll be prompted to enter their girlfriend’s name and number. Once that’s set, the bro can then choose which of the ready-to-send messages are appropriate for their relationship, and the app will choose one messages to send you each day.

If that’s not charming enough, the app also allows the user to enable his girlfriend’s WiFi, so that she won’t get any messages sent to her when they’re together.

On top of all these awesome features, there’s one that really takes the d-bag cake: The app has a “girlfriend safety lock down” mode, so when the passcode is entered wrong several times (aka, if the girl sees the app on her man’s phone and tries to access it) she’ll get a list of gifts the boyfriend was “planning to buy her” instead. Because that doesn’t paint women as materialistic shrews at all.

The genius who invested the app, Evan Selinger, explained to Wired that the guy who’s using it actually will be “maximizing” their relationship because their girlfriends will be at home thinking their boyfriend actually cares enough to text them. Unfortunately (or fortunately for us girls), the app is only available for Android devices at the moment, so guys with iPhones will just have to wait to be total jerks.

Maybe John Mayer or Robin Thicke could have used this to avoid their recent breakups with their ladies?

Watch the video below and see how the app works, and let us know your thoughts below.