Britt Baron was just 6 years old when she first played a man onstage. It was the summer before first grade and Baron was at camp in Connecticut. But playing Snow White and Cinderella didn’t interest her—she wanted to be Sherlock Holmes. “I insisted on playing Sherlock even though it was traditionally a boy’s part,” Baron says. “I had a track record of always trying out for male roles.”

Baron’s tendency to subvert gender stereotypes is evident throughout her life—from childhood, when she would pretend to have traditionally male occupations (“I loved doing a British doctor”); to middle school, when she duked it out with male classmates for “juicier” leads; to her current gig on Netflix’s “GLOW.”

The ’80s-set dramedy centers on a ragtag group of down-and-out actresses who score their big break as amateur wrestlers. The role, which Baron went all-out for in her audition (more on that later), changed her perception of what women’s bodies should be according to Hollywood and on-screen standards.

“I want real parts, real women, real characters,” Baron says. “I don’t care if it’s a man or a woman. As long as the character’s interesting, charismatic, and dynamic. I don’t want to be the secretary.” 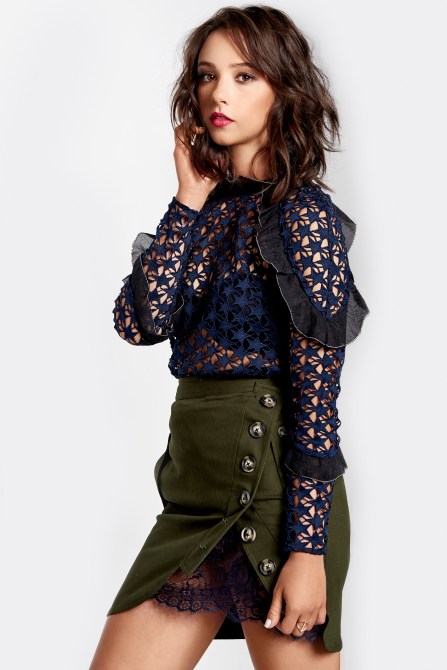 Raised in a small town in Connecticut, Baron begged her parents to let her pursue acting professionally after her camp debut as Sherlock Holmes. Her mom, a former publicist who’s represented child actors like Raven Symone, told her no. “She wanted me to learn how to ride a bike and be a normal kid,” Baron says. “She had an awareness of what this industry can do to child actors.”

So instead, Baron grew up as a regular kid, sneaking in acting at school plays and community theater. Still, after seeing parts for “ingenues” and “women waiting for princes to come save them,” Baron realized her preference for male roles went beyond her camp experience. “Growing up, there was a lot of Cinderella and Snow White. I really never identified with those kinds of characters. They always seemed, for a lack of a better word, boring,” Baron says. “I didn’t want to just whisper and smile.”

As a result, Baron began battling her male classmates for meatier roles. She auditioned in wigs and drawn-on mustaches, and practiced her voice in a lower register to convince directors she was right for the part. “Sometimes I got to play them and sometimes the director was like, ‘No—I’m sorry,’” Baron says.

Though she didn’t always land the parts she wanted, the experience pushed Baron to pursue acting as an adult. After earning a theater degree, Baron dabbled in Chicago’s theater scene before making the jump to Los Angeles to try her hand at screen acting. 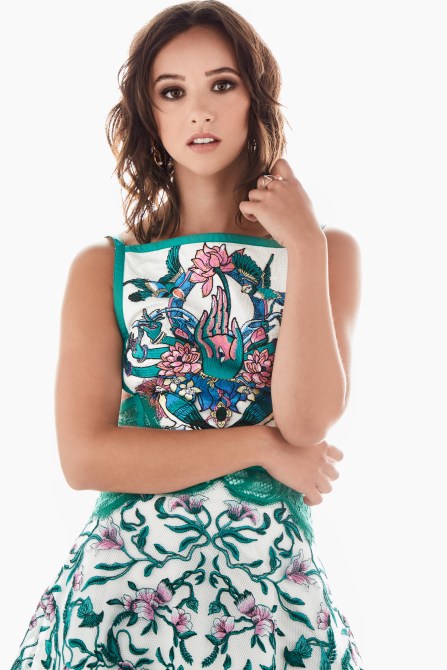 Among the first scripts to come her way was for “GLOW,” an ensemble series based on “Gorgeous Ladies of Wrestling”—a 1980s television phenomenon Baron had never heard of. “I remember the email being like, ‘This is based on a true thing. And then in parentheses, ‘No, seriously. Google it,’” she recalls.

When she did, Baron came across a campy, over-the-top wrestling program where women rapped, spat dirty insults, dressed in ridiculous costumes, and flung each other off wrestling ropes. “I had never seen anything like it,” she says.

I didn’t want to just whisper and smile.

Considering her lack of screen experience, Baron knew she had to do something extreme for her audition. So she choreographed an original wrestling sequence, pretended the small audition room was a boisterous, fan-filled arena, and prayed her over-the-top theatrics would pay off. “I remember running it for my friend, asking, ‘Is this too crazy?’” Baron says. “I didn’t know if I was about to finish my monologue and the producers were just going to have their jaws open like, ‘This girl totally missed the mark.’” 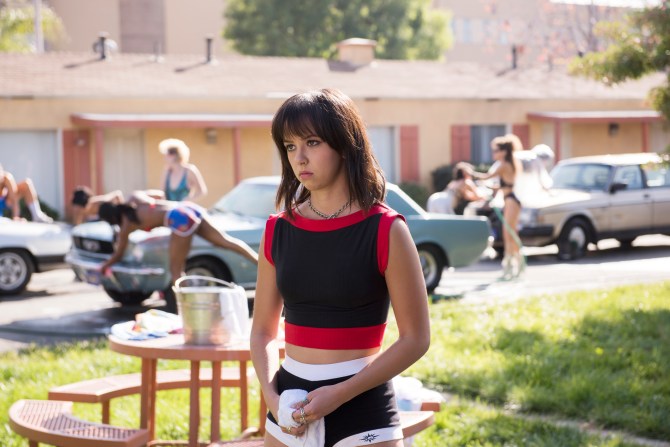 The mark was spot-on. Shortly after, as Baron was babysitting for some extra cash, she received the call that she booked the part for Justine Biagi (a.k.a. “Scab”), an ‘80s film-obsessed anarchist with fringe bangs and a game-changing secret.

Like the show’s characters—a group of actors who fall into wrestling to break free from the stereotypical parts for women—Baron also saw “GLOW” as the complex, female-driven project she’d been waiting for. It’s a breakthrough she credits to showrunner Jenji Kohan, who also created “Orange Is the New Black,” for casting so many diverse women of different colors and sizes.

“I think this is the only project I’ve done that I’m working with so many women. There are 14 of us on the cast,” Baron says. “Jenji includes so many women, not just in front of the camera but behind the camera. I’m really fortunate to be part of a show that’s really pushing the needle forward.” 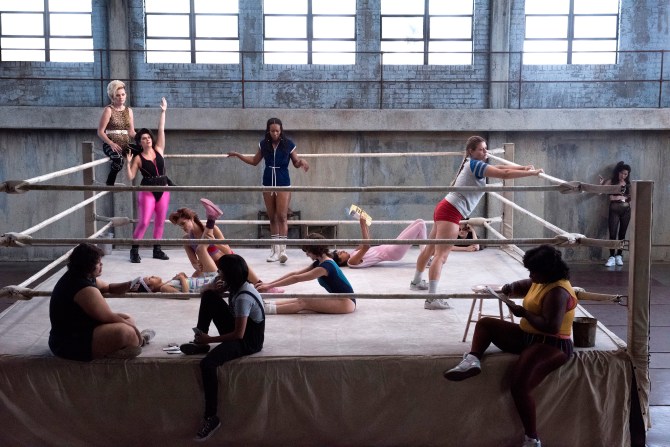 I love ‘GLOW’ because it’s about being loud, big, and showing personalities.

“This was in the ’80s. Not that things haven’t ultimately changed, but I’m happy that they didn’t shy away from any of this,” Baron says. “You see these women struggling with, ‘I want a job. I need the money, but I have to do this awful stereotype.’ I have actor friends who are still dealing with that in 2017.” 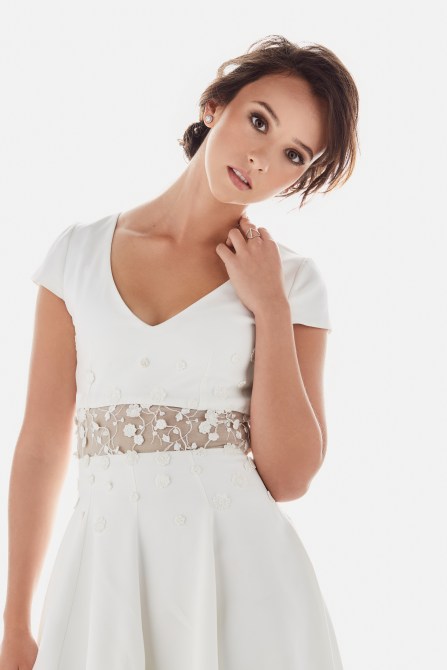 Baron admits the issue she struggles with most as an actress in 2017 is nudity. Her “GLOW” costar Alison Brie recently made headlines after an interview went viral in which she revealed that she was asked to strip down in an “Entourage” audition.

“There are still a lot of parts that are questionable. I have a friend who did a show where she had one line, but she just had to be butt naked,” Baron says. “I love ‘Game of Thrones’ but there’s a lot of women who don’t even speak and are just naked in the background. How many scenes do you see a bunch of naked men walking around a room?” 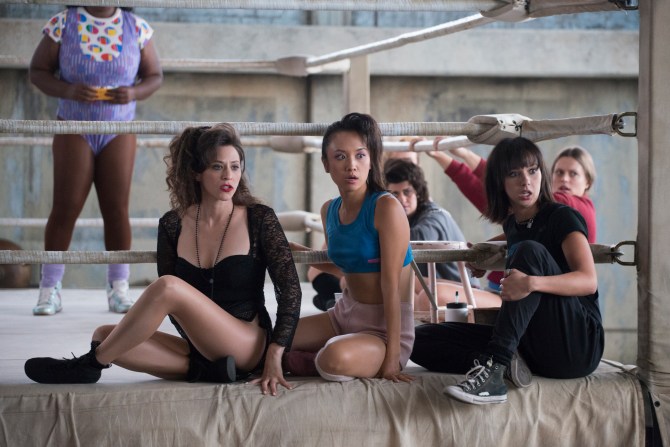 For Baron, this cultural fixation on women’s bodies—which manifests particularly strongly for actresses in the public eye—translated to insecurities early in her career when her first reaction to rejection was to analyze her weight. “It’s hard to sit in a waiting room and look at a bunch of girls. My internal monologue was ‘I’ll never get this part. Look at this girl. she’s 20 pounds lighter than me. She’s prettier,’” Baron says.“You get to a point where if you’re not cast, you think, ‘Maybe I need to lose weight. Maybe that’s why.’”

You get to a point where if you’re not cast, you think, ‘Maybe I need to lose weight. Maybe that’s why.’

This is likely why Baron cherishes “GLOW,” where she learned on day one that—despite the rigorous training the cast would have to go through to play wrestlers—none of them were expected to lose weight. “I remember in one of my first costume fittings, they told us, ‘No. They don’t want you to lose weight. Stay the way you are,’” Baron says. “They cast all of us because of the way we were. It was not about losing weight or getting a six pack.” 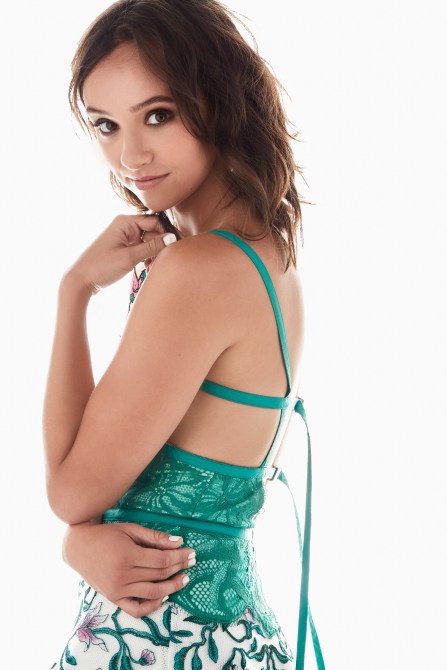 Though Baron is still interested in playing male parts (her dream would be Jafar from “Aladdin”), she’s ready to put down Sherlock Holmes and catch the wave of better representation for on-screen women.

“As a kid I was so drawn to male roles because a lot of times the men get the best part.  Luckily, today, there are more interesting female parts being written,” Baron says. “I love ‘GLOW’ because it’s about being loud, big, and showing personalities. It’s different types of women. We’re starting to see real characters and real stories being told—not cookie-cutter images.”