The shade! Britney Spears shaded Jamie Lynn’s memoir after her younger sister almost used one of Britney’s lyrics as the title of her upcoming book.

News first broke of Jamie Lynn’s memoir in July when Worthy Publishing, a branch of Hachette Book Group, announced that the Zoey 101 alum was set publish a book that told her “unfiltered story on her own terms” on January 18, 2022. The original title for the book was I Must Confess: Family, Fame, and Figuring it Out
, a reference to a lyric from Britney’s 1998 song, “…Baby One More Time.” However, after backlash from Britney’s fans, Jamie Lynn announced October that she had changed the title of her memoir from I Must Confess to Things I Should Have Said
. “I can’t believe I finally finished writing my book!!! ‘THINGS I SHOULD HAVE SAID’ has been in the works for quite a longggg time now,” Jamie Lynn wrote in an Instagram post on Monday, October 11.  According to the publisher’s description of Things I Should Have Said, the book will follow Jamie Lynn’s “years escaping” her “role as Britney’s kid sister.”

A day after Jamie Lynn’s announcement, Britney took to her Instagram with a post that seemed to shade her younger sister’s decision to write a memoir about their family and almost name it after one of her lyrics. “Psssssss also great news … I’m thinking of releasing a book 📚 next year 😜 but I’m having issues coming up with a title so maybe my fans could help !!!! Option #1 … ‘Shit, I really don’t know’ Option #2 … ‘I really care what people think’ 😂🙄🤷🏼‍♀️ !!!!” What do you guys think 🤔🤔🤔 ????” Britney captioned a photo of her in a black dress. 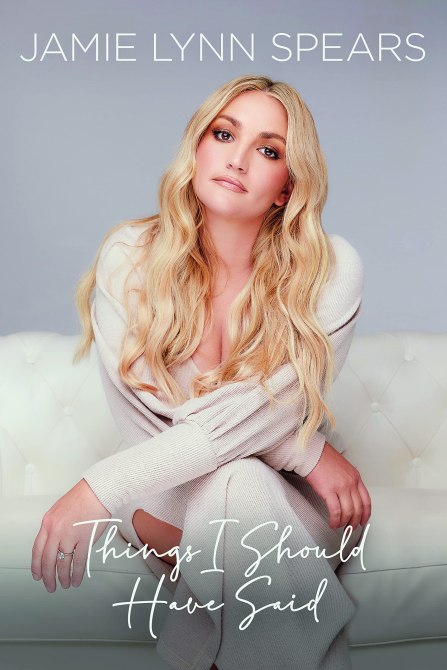 In an Instagram post in July, Britney confirmed that she and Jamie Lynn were not in a good place after she expressed how hurt she was when Jamie Lynn performed a medley of her songs at the 2017 Radio Disney Music Awards. “my sister showed up at an awards show and performed MY SONGS to remixes,” Britney wrote. She continued, “My so-called support system hurt me deeply… This conservatorship killed my dreams…so all I have is hope and hope is the only thing in this world that is very hard to kill…yet people still try!!!!”

She continued, “How dare the people you love the most say anything at all…did they even put a hand out to even lift me up at the TIME!!!??? How dare you make it public that NOW you CARE…did you put your hand out when I was drowning???? Again…NO.”

Things I Should Said by Jamie Lynn Spears hits shelves on January 18, 2022. Pre-order it on Amazon.