She may be the Princess of Pop, but to Britney Spears’ kids, she’s just known as mom. Britney shares two sons with her ex-husband Kevin Federline: Sean Preston and Jayden James.

Britney and K-Fed were married from 2004 to 2007. They got engaged in July 2004 after three months of dating. In November 2006, Britney filed for divorce from Federline, citing irreconcilable differences and asking for both physical and legal custody of their two sons, with visitation rights for Federline. Their divorce was finalized in July 2007, however, in October 2007, a court ruled to grant Federline sole physical custody of Jayden James and Sean Preston due to Britney’s “habitual, frequent and continuous use of controlled substances and alcohol” at the time, according to the judge.

The drama continued in January 2008 when the police were called to Britney’s home after she reportedly refused to relinquish custody of her children to Federline and locked herself in a room with Jayden. She was then hospitalized at Cedars-Sinai Medical Center and Federline was given “sole legal custody and sole physical custody” of their children, while Britney would receive visitation rights. 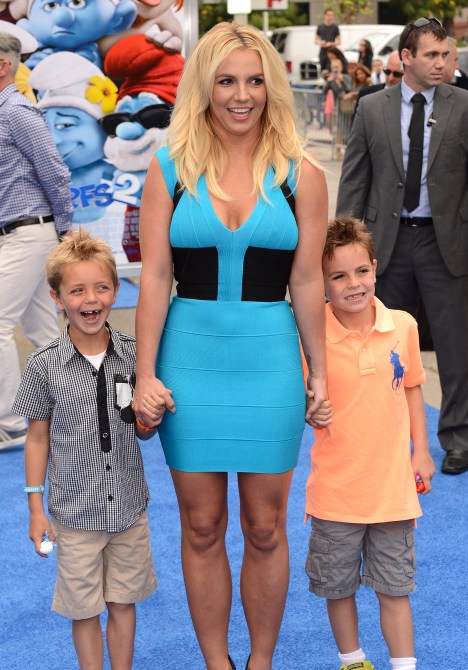 Around this time, Britney was also placed under a conservatorship led by her dad, Jamie Spears, and her lawyer, Andrew Wallet. As conservators over Britney’s person and estate, Jamie and Wallet had access to her doctors and medical records, could limit who visits her and had control over the financial decisions she makes. Wallet has since removed himself Britney’s conservator, whereas Jamie has agreed to step down from the role.

Prior to agreeing to resign from his role as conservator, however, Jamie named Britney’s younger sister, Jamie Lynn Spears, as the trustee to her estate, which means that she will receive her fortune if Britney dies. The decision led to backlash from fans who believed that Britney’s sons should’ve been her trustees.

After her conservatorship was created, Britney and Federline were back to 50/50 custody over their kids. However, their agreement changed again in September 2019, when K-Fed was given 70 percent custody, while Britney was given 30 percent unsupervised custodial rights, according to Us Weekly. That change was confirmed to Us Weekly in March 2021 after a source told the magazine that Britney sees her sons “less” after Federline altered their custody agreement.

“She used to have more time with them until Kevin altered their custody arrangement after the incident with, Jamie. Since then, the boys’ visits have been less frequent,” the source said. “They spend most of their time at their dad’s house and have very few visits with their mom, especially overnight ones…They are teenagers now and want to be with their friends, not their parents. It’s nothing against Britney; they love and idolize her, and Kevin trusts her. It’s just that they’re getting older, so when they’re not at their main home with Kevin, they’re usually out doing things with friends.”

The insider went on to note that Britney sees her sons “periodically” and they don’t have a “set schedule.” Despite this, the source told Us Weekly that Sean Preston and Jayden are “normal boys” who “just want to see their mom happy.”

Interest around Britney’s custody agreement sparked in February 2021 when Hulu released its documentary, Framing Britney Spears, which documented the history of Britney’s conservatorship and her legal battle with her father. In an interview with Entertainment Tonight at the time, Federline’s lawyer, Mark Vincent Kaplan, said that his client doesn’t know how much his sons are aware of Britney’s conservatorship and if they’ve watched Hulu’s documentary about their mom. “Kevin wants to stay out of any internal commotion that might be going on between Jamie and anybody on that side of the case,” Kaplan said. “Unless and until it starts interfering with that being an adequate custodial home, I don’t think Kevin wants to insinuate or be involved in that in any way.”

Though Federline doesn’t know how much his kids are aware of Britney’s conservatorship, Kaplan did note that Sean Preston and Jayden James have more control over who they want to spend more time with as they become older.

“As the boys get older, how they feel about where they want to be and when they want to be there is given a little more weight,” Kaplan said. “Obviously they don’t get to make that decision,” he adds. “Both Britney and Kevin have a common goal in wanting to make sure that both custodial homes are as safe, structured, and orderly as can be so that the kids feel safe, stimulated and protected regardless of which parent’s custody they’re in. That’s a good parallel goal to be maintained and as long as it is being maintained, there’s no need for anyone to be concerned about having to change that.”

Framing Britney Spears is available to stream on Hulu. Here’s how to watch it for free.