Following the termination of her conservatorship, Britney Spears and Jamie Lynn Spears‘ feud is still raging on. Now, Britney’s younger sister is opening up about their ongoing rift—including the fights with the pop star that have “scared” her in the past.

Britney’s sister Jamie Lynn revealed during an interview with ABC News Nightline anchor Juju Chang that she was often told not to “upset” her older sister by her dad Jamie Spears and mom Lynne Spears—even after an alleged incident in which Jamie Lynn says the pop star began “screaming” at her while holding her daughter Ivey Joan Watson, born in 2018. Jamie Lynn—who is now married to Ivey’s father, Jamie Watson—also has another daughter, Maddie Briann Aldridge, who she welcomed with ex-fiancé Casey Aldridge in 2008.

During the interview, which aired on January 12, 2022, Jamie Lynn claims that the Grammy winner “got in [her] face” during a fight that resulted in her eldest daughter trying to intervene. “She cursed at me, so I just walked out of the rooms,” Jamie Lynn claimed, adding that the alleged incident took place while quarantining with the pop star. “I was like, ‘We’re just all family under one roof. I’m not trying to argue.’ And when I tried to remove myself from the situation, that’s when I guess she just got really angry.”

Jamie Lynn—who appeared on Nightline to promote her upcoming memoir, Things I Should Have Said, out January 18, 2022—also alleged her daughter Maddie “tried to mediate the situation,” noting, “I hated that. Like, that’s not what you’re supposed to do. You’re 12.” As for her parents, Jamie Lynn claims that they were more concerned about Britney’s reaction over her own. “They told me that I shouldn’t be upset. Like, I can’t upset Britney,” she recalled. “I said, ‘You just saw me and my children be upset. When will I matter?’” 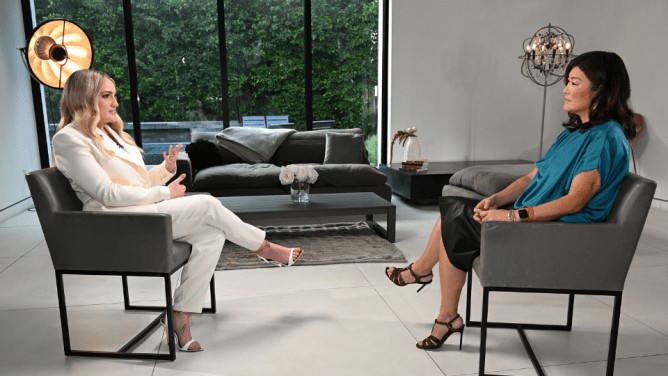 The Sweet Magnolias star went on to recount another alleged incident with Britney that took place when she was a child. According to Jamie Lynn, the “Toxic” singer once took a knife with her because she was “scared” before locking herself and Jamie Lynn into a room. “I was a kid in that moment. I was scared,” Jamie Lynn said of the incident. “That was an experience I had. But I also was fearful to, like, really say anything because I didn’t want to upset anybody or anything. But I also was upset that she didn’t feel safe.”

Still, Jamie Lynn noted in her interview with Chang that she always “supported” Britney no matter what—including when it came to terminating Britney’s conservatorship, which was officially dissolved in November 2021. “I’ve only ever loved and supported her and done what’s right by her, and she knows that,” Jamie Lynn said. “I’ve always been my sister’s biggest supporter, so when she needed help, I set up ways to do so. Went out of my way to make sure that she had the contacts she needed to possibly go ahead and end this conservatorship and just end this all for our family. If it’s going to cause this much discord, why continue it?”