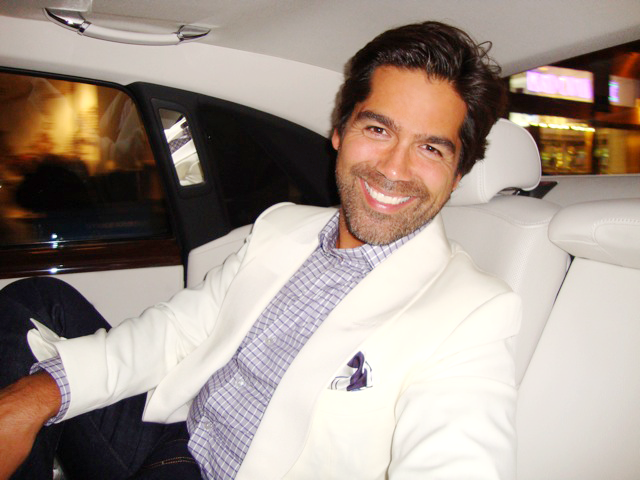 When we received an invite to not only attend Brian Atwood‘s fashion week party celebrating his new campaign and upcoming store opening but also to accompany him en route to the event, we couldn’t resist the opportunity. Upon arriving at the designer’s Chelsea digs, we were immediately whisked into a dapper Rolls-Royce perfectly suited to transport the equally dapper, Tom Ford clad Atwood — it doesn’t get much more glamorous than that.

Upon arriving at The Four Seasons Restaurant, Atwood made his way through the blinding flashbulbs and greeted the star of his new print and video campaign “Sex is in the Heel” Candice Swanepoel as well as Kim Kardashian, Ryan Lochte and Paris Hilton. The typically conservative restaurant had been transformed into a full-on disco — fuchsia lights, soaring palm trees, a glittering disco ball and packed crowd that was comparable to the fabulousness of the original Studio 54. But Atwood was as unaffected, smooth and humble as ever, and we got to chat with him about his new racy ad campaign, his upcoming Madison Avenue store and how to keep women looking and feeling sexy.

Brian Atwood: I’ve been doing this for 11 years. No one else knows that. I never knew about this 50 Shades of Grey until the campaign was already shot. I think everyone has a little fantasy, that fetish of something mysterious, something about what they would like to pretend to be.

Were you nervous about the reactions to the campaign, namely the critics?

Shoes are all about sex. Sex is in the heel. Women feel different when they wear shoes. They feel sexy. You walk differently. You get that whistle down the street whether you want it or not.

Well I think she’s extremely confident — that’s obvious. And I think that there’s not a blatant sexuality. She’s always very put together and chic though — not vulgar.

If you had to pick one pair of shoes from your fall collection that a woman must own for this season — be it their first pair of Atwoods or their 20th pair — what would they be?

If you can’t do the python boot over-the-knee, I’d say the Maniac pump that has been a core staple for our business for nearly seven years. I think that’s the go-to shoe whether it’s in nude or black. I think it’s kind of like that no-brainer style that always works. And it’s always sexy too, of course.

Let’s move onto the upcoming store we’ve been hearing so much about. Can you give us any hints?

It’s very old Hollywood. It’s very glam, and I don’t think there’s anything like it in New York for shoes. It’s about the details. It will be a shopping experience, and it’s not cold or you know, too modern. It’s very, very lush, and I think you want to just enjoy the space. We have this gorgeous purple marble facade in this archway. You don’t get that just anywhere…

Did you always want to be uptown?

I was always picturing it uptown, and you know there is always time for a second store in a smaller destination downtown, but I think to really establish yourself as a New York boutique, you’re uptown — there’s no question about it.

So what’s next for Brian Atwood — any upcoming expansions in the works?

It’s in the works. I think if it’s intrinsic and make sense for the brand, but possibly eyewear and perfume. I think timing is everything, and it’s a very exciting time.