Bretman Rock is excited to be vulnerable. The 23-year-old Filipino-American social media personality unfolds a never-before-seen side of him in the new season of his show, MTV’s Following: Bretman Rock. The upcoming season features new adventures in his home state of Hawaii, while also featuring a touching exploration of his strained relationship with his sister, Princess Mae.

In an exclusive interview with StyleCaster, Bretman talked about his new experiences with therapy and what he wants his followers to learn from his show. In the second season’s first episode, Bretman’s sister, Princess Mae, suggests that they go to therapy together after noticing the increasing distance between her and her brother. At first, Bretman seemed reluctant to go with his sister but was open to fixing their relationship. “I blamed my mom because she always thought that I was being dramatic, even though I was probably having an anxiety attack,” he explained as to why it took so long to go to therapy. “I blamed her for not letting me have the space to talk about my mental health.”

The first season of Following Bretman Rock delved into the star’s interpersonal relationships with his close family and friends. From his mom wanting to move back to the Philippines after retirement, to his complicated relationship with his dad who recently passed, Bretman still cared for the people around him by throwing parties or setting them up on blind dates. “In the Philippines, our parents didn’t have access to a therapist, especially during that time,” he shared. 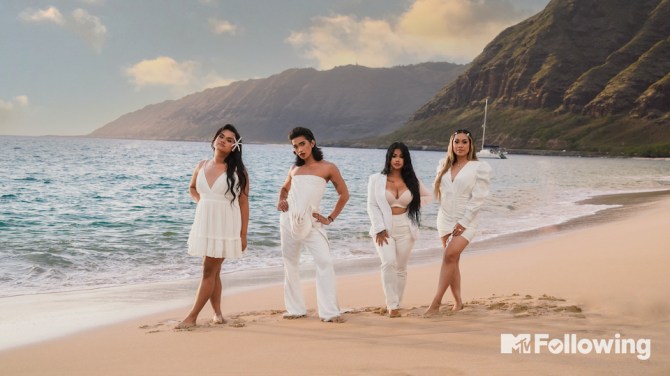 Bretman and his family immigrated from Cagayan, Philippines to Hawaii at the age of seven. During therapy, he revealed that the reason why he didn’t say “I love you” to his sister was that his mom didn’t tell them that verbally when they were growing up. Though, he did acknowledge the unending support and love that his mom had for his career. “What I really do appreciate is my mom is always so open, especially with social media,” he recounted of his early days on social media. “She never understood what I did for the first couple of months, she thought I was selling drugs online because she was like, ‘Girl, where are you getting money from?’”

Bretman wants to open up conversations about therapy for first-generation and immigrant kids, and most importantly, wants to fix everything that was broken in his family. “It is generational trauma. You just have the choice if you want to break it or not. You’re continuing with it with your kids and especially with my sister having two kids now. I would want them to open up to me I would want [her daughter] Cleo to come to me when she’s having her first breakup or when she’s having a mental breakdown.”

I don’t think about authenticity. I just am me as f—k.

A point of tension between Bretman and his sister in therapy was differentiating each other’s love languages and realizing that they weren’t compatible. Bretman conveyed that it was so difficult to mesh their two love languages together, saying, “Having your love language as quality time is a double-ended sword. It makes you a little bit more sensitive. When people don’t necessarily reciprocate time back, it’s like they’re throwing away my love. Sometimes you gotta pull yourself back.”

During the first episode of the second season, Bretman’s assistant and best friend Keiffer suggests after their first therapy session that Bretman and his sister should bake a cake at Princess Mae’s house without talking unless they say compliments to each other. With every whisk movement or mistake, they erupted in laughter and tried to make it as positive as possible. “It’s very warming for my heart to hear Bretman and Miss Kay laugh,” Princess Mae said in a confessional. “It feels like we’re making up for lost times.”

In the ongoing journey of undoing these family tensions and trauma, Bretman still loves himself, his culture and his family. “I don’t think about authenticity. I just am me as f—k,” he professed. “I don’t have to shove it down your throat that I’m Filipino. You just know my culture just by the way I treat my family, how I eat with my hands and how I’m so damn loud. I just do authenticity effortlessly, because all I know is to be Bretman Rock.”