It’s not a new concept for celebrities to throw political statements into their red carpet looks or acceptance speeches, and Regina King and Uzo Aduba’s Breonna Taylor shirts at the Emmys this year were undeniably the most important outfits of the evening. Whenever stars use their platforms to speak for the voiceless, they instantly end up on our Best-Dressed list—and these particular looks from Emmy-winners Regina King and Uzo Aduba definitely fit the bill. Though most of our favorite stars accepted their awards virtually at the 2020 Emmys, they still had a larger audience than most of us ever will, and King and Aduba chose to use that spotlight as an opportunity to remind us all to fight for justice.

Thankfully, Regina King and Uzo Aduba understand the importance of using their platforms for good—even during a virtual awards show. While accepting her award for Best Lead Actress in Watchmen, King wore a Breonna Taylor t-shirt featuring Taylor’s face and the phrase “SAY HER NAME” on the front, and paired her tee with a fuchsia blazer, pink smoky eye and top knot. Aduba, who won the Emmy for Best Supported Actress in Mrs. America, wore a t-shirt that simply said Taylor’s name across the chest in gold type, matching her gold bottoms and eye makeup. These actresses reminded us all tonight that Taylor still deserves justice, and they used their gorgeous ensembles to do so. Talk about multitasking in the absolute best way possible. 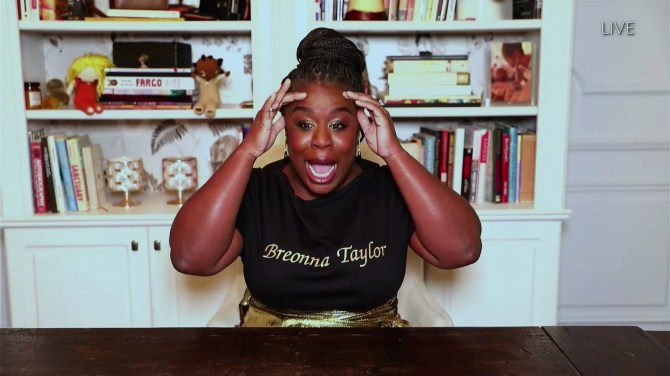 Courtesy of Invision for the Television Academy.

It’s a given that most people tuning into the Emmys were already familiar with Taylor’s story, and King and Aduba’s outfits served to remind them to keep the same energy the public had when news of Taylor’s death first outraged them. After Breonna Taylor’s murder at the hands of three cops in March 2020, a worldwide battle for justice in her name began. So many folks—including tons of celebrities—have protested, made public pleas and signed petitions demanding the arrest of the officers who shot an unarmed Breonna Taylor, but so far none of the officers involved have been convicted.

For those who want to help (and don’t have the same celebrity status to spread the word as King and Aduba), you can donate to the Justice for Breonna Taylor GoFundMe and sign the petition to arrest the cops who killed Taylor. There’s also a Justice for Breonna Taylor website where you can get more information about where, exactly, things stand with her case and the fight for justice. Don’t think there’s nothing you can do—any and all small actions done in her honor will help to bring about change. 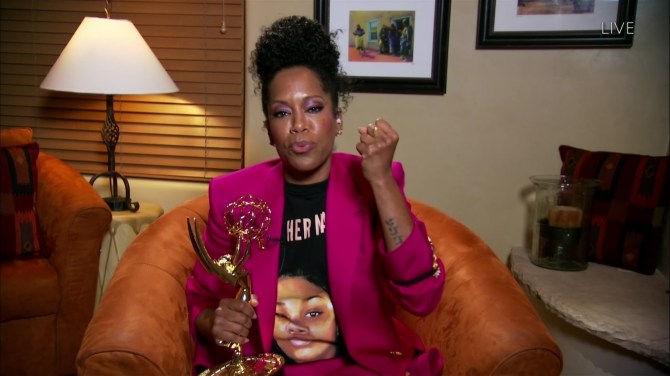 Courtesy of Invision for the Television Academy.

As the battle for justice for Breonna Taylor and all Black lives continues, I’m glad we have celebrities like Regina King and Uzo Aduba using their platforms and their fame for good. I love a good red carpet gown as much as the next person, but sometimes, making a powerful statement is the most gorgeous look of all.