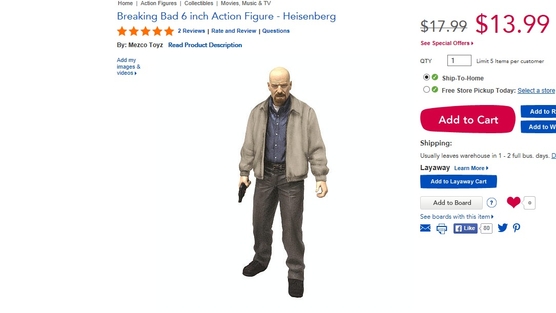 In an effort to shield their precious offspring from anything related sex, drugs, or violence, American parents are adept at overreacting. Case in point: 2011’s “Glee”-gate, when the conservative watchdogs at the Parents Television Council flipped their collective lid over an episode of the lily-white show in which two teenage couples—one straight, one gay—have sex for the first time. However, being less than thrilled about “Breaking Bad” toys being sold to kids is a pretty fair gripe.

Florida mom Susan Schrivjer was appalled when she noticed that Toys ‘R’ Us was hawking action figures inspired by the AMC drama about a meth mastermind, complete with—get this—a detachable sack of cash and bags of fake crystal meth, so she started a Change.org petition.

“Parents and grandparents around the world shop at Toys ‘R’ Us, online and in stories, with their children and should not be forced to explain why a certain toy comes with a bag of highly dangerous and illegal drugs or why someone who sells those drugs deserves to be made into an action figure,” Schrivjer wrote on the petition, which currently has 9,300 signatures.